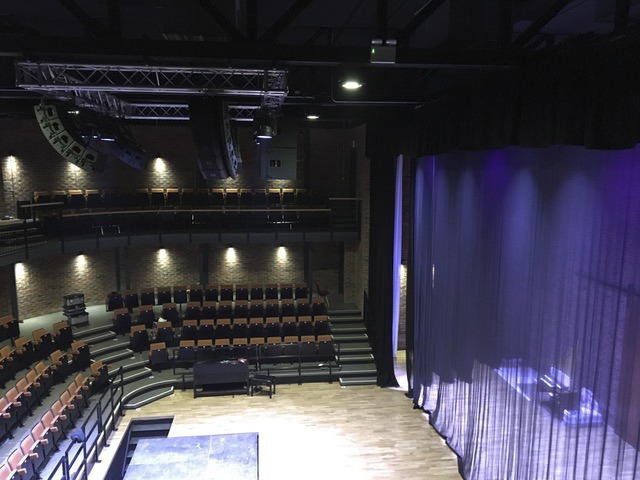 A Centre of Academic Excellence, Cronton Sixth Form College in Widnes is a progressive institution, offering a wide range of A Level and Vocational courses. Over the last few years the college has invested £12 million in the campus in order to create state-of-the-art learning facilities and modern social areas. The latest addition is the Cronton Playhouse, a spectacular 320-seat theatre with orchestra pit.

A concert-standard full technical infrastructure has been provided by Crystal Sound and Light, with sound reinforcement provided by a JBL VRX system, powered by Crown amplification.

According to Crystal Hire Manager, Michael Tooher, the four-year-old company has enjoyed a long relationship with the Sixth Form College, who had no need to look any further when planning this major fit-out. The origins of this project date back several years and have been driven largely by the Head of the Centre of Excellence for Performing Arts, Matt Plant. He revealed that it is the company’s largest contract to date.

Crystal also has a close working relationship with HARMAN brand distributors for the UK and Ireland, Sound Technology Ltd., as well as the equipment supplier, James O’Leary of We Know AV. Michael Tooher was soon in contact Sound Technology’s Application Engineer, Stuart Strachan.

“Once we had the drawings from the architects we sat down with Stuart and calculated the optimum design with the VRX,” stated Michael. “Sound was of prime importance and so we weren’t hampered by budget constraints.”

This led to the 20 VRX928LA speakers bring flown from a square fixed truss grid overhead in four hangs of five elements, with four VRX915S subwoofers mounted closely together as two separate hangs at the rear.

“This installation will future-proof this 320-seat performing arts space, which will also double as a lecture theatre,” he summarised.

“A tried and tested product, the VRX928LA sounds truly glorious with the V5 presets available on the Crown I-Tech HD amplifiers,” said Stuart. “On the Fullrange preset with some adjustment of the Array Size Compensation filter within JBL’s Performance Manager software, the system sounds much larger than it looks.  The geometric relationship of the Fullrange main and side hangs to the flown subs on the grid allows fantastic summation in the low end both on the balcony and in the stalls.”

The installation had to be completed in time for a performance of The Phantom Of The Opera by students in late March, and this will be one of four major productions a year, three of which are extra-curricular productions sitting entirely outside the timetable. By day the theatre is a teaching space on their A Level and University Arts London awarded courses, with theory classrooms and studios running off the performance auditorium.

The facility also has a strong technical team headed by Adam Bradley. Summing up the installation, he could hardly have been more effusive. “The sound system is beyond anything we could have imagined,” he said. “Previously we used a system from the late ‘70s which was barely functioning, so this is beyond our wildest expectations. A top-quality sound and lighting system will provide a richer experience for everyone, as befits a Centre of Excellence.”