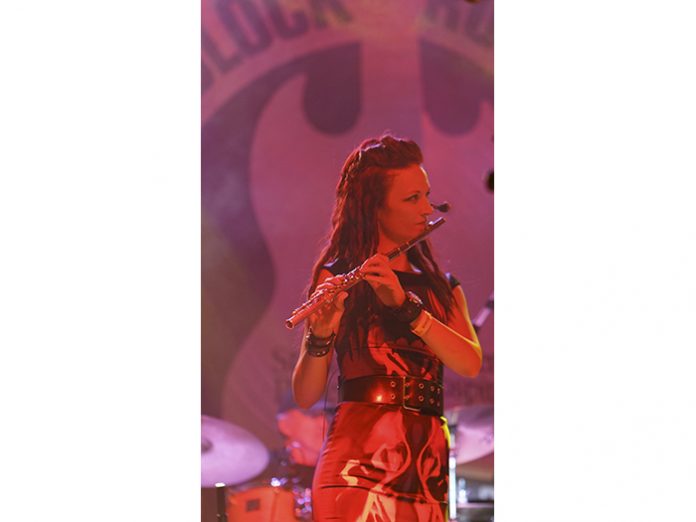 Recording artist and session musician Adrienne ‘AeB’ Byrne has performed with an impressive list of artists, including Robby Krieger, Alex Lifeson, Jack Black, Haley Reinhart, Chicago, and Sebastian Bach to name just a few. Often dubbed ‘the next Ian Anderson’, she is known for her cutting-edge rock n’ roll flute work, soulful and powerful vocals, as well as an eclectic mix of instruments in her arsenal—including the rare and enchanting hand pan. To ensure her instrument and her voice are miked both efficiently and musically, she relies on the proven performance of an ISOMAX Headset microphone from Menlo Park, CA-based Countryman Associates.

As a flautist, freedom of movement is crucial to performing. By using the Countryman ISOMAX Headset, AeB retains the ability to move about freely while remaining in optimal proximity to her microphone. Combined with the capability of her Audix RAD 360 wireless microphone system, AeB is never encumbered by cables that restrict her movement—enabling her to focus on the performance without distraction. Aeb discussed her use of the Countryman ISOMAX Headset. “I position my ISOMAX Headset slightly above my mouth so it’s not out of range for vocals while still giving the flute room,” she explained. “This arrangement results in a clear, musical flute tone because it picks up the core of the instrument’s sound as well as its natural breathiness that allows it to cut through a mix.”

“I started out several years ago with a Countryman ISOMAX 2 Choir mic,” AeB added, “before the company launched the instrument line. This was the result of a recommendation by a fellow flutist and I immediately fell in love with the microphone, as did every sound man I worked with from that point on. I decided to go with the headset to give myself the freedom to switch between flutes easily throughout my set. Although I got the mic primarily for flute purposes, I immediately noticed that it had a great vocal sound and have been using it for both flute and vocals ever since.”

“The ability to use the ISOMAX Headset for both my flute and vocals turned out to be a tremendous asset in my solo sets where I’m constantly changing instruments and positions on stage,” AeB explained. “By contrast, the use of a traditional mic stand setup would be really challenging. My ISOMAX also makes it easier to bring a strong stage presence when working with a band on a large stage. The headset fits comfortably along with my in-ear monitors, so I’m never distracted. The mic is super lightweight and has a very low profile. The audio quality is always pristine, and I can get the levels I need because I can keep the mic close.”

For someone in AeB’s line of work, the ability to contact an equipment manufacturer and get questions answered in timely fashion is very important. In this regard, AeB gives Countryman Associates high marks. “The people at Countryman Associates have been a wonderful family of audio experts since I first discovered them,” she reported. “They really care about the performance of their microphones and go out of their way to make certain you have the ideal setup for what you are trying to achieve. They are a small company, so everyone you talk to is an important part of the operation. You can feel their sense of pride and investment in everything they do.”

Before turning her focus back to the music and forthcoming engagements, AeB offered these parting thoughts, “I’ve had my ISOMAX Headset since 2015 and, at this point, I can’t imagine what I’d do without it. This microphone has become an integral part of what I do and enables me to create a unique format and instrumentation that would be impossible otherwise. I routinely have fans, peers, and audio experts ask me how I mic myself because they love the sound so much! I believe this speaks volumes for how much the quality of Countryman sets them apart from the crowd.”

To learn more about Adrienne ‘AeB’ Byrne, go to www.aebness.com.

For more than 30 years, Countryman has focused on developing microphones and accessories that deliver maximum gain before feedback, with the highest possible rejection of wind, vibration, interference, and other unwanted sounds. The result is warm, clear vocals in speaking and singing applications, delivering natural audio reinforcement that requires almost no attention from the sound engineer or the performer.

For additional information about Countryman Associates, visit the company online at www.countryman.com.