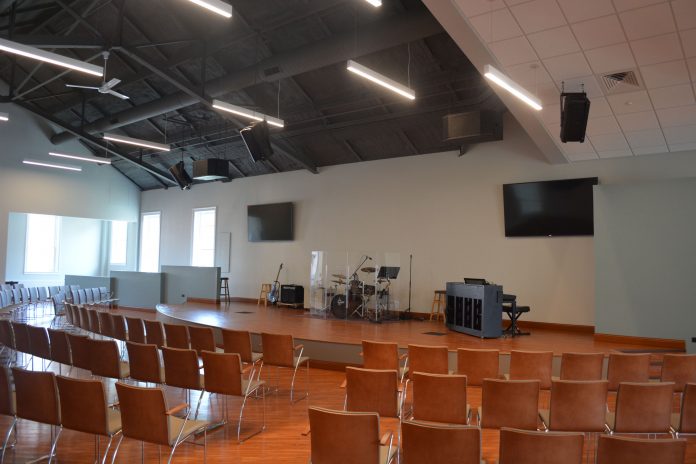 The First Church of Christ in Wethersfield, CT is not merely a house of worship, but also a historical structure. The church’s brick Meetinghouse, built in 1761–1764 and now the oldest building of its type in New England, saw George Washington attend services in 1781 as the Revolutionary War drew to a close. The Meetinghouse and other buildings on the campus are picturesque on the outside and their interiors have evolved to keep up with the sonic demands of 21st-century worship. After the Meetinghouse had a RoomMatch® Utility sound system from Bose Professional installed in 2016 to alleviate centuries-old speech-intelligibility problems, the solution inspired the church’s leaders to once again turn to Bose to improve the facility’s sound technology in other areas. The new goal was to convert an upstairs area in the Marsh Building, which is used to hold parish meetings and other events, into a multipurpose meeting, presentation and contemporary-worship space.

That project, which was completed last June, utilised a three-speaker array of Bose F1 Model 812 Flexible Array loudspeakers buttressed with a pair of Bose RoomMatch RMS215 subwoofers, all powered by a Bose PowerMatch PM8500N networked amplifier. In addition, eight Bose FreeSpace DS 16F flush‐mount loudspeakers, powered by a Bose PowerMatch PM4500N networked amplifier, extend the sound evenly throughout the room. A Bose RoomMatch Utility RMU206 loudspeaker was also installed at the FOH position for monitoring. The entire system is pulled seamlessly together through a Bose ControlSpace ESP-880 processor.

Stephan Kolpinski, Director of Sales at Adtech Systems, the AV systems integrator that worked on both projects at the church, says the success of the Bose Pro system in the church’s Meetinghouse gave the church’s leadership full confidence that Bose could also make its new multipurpose space a success. “In the Meetinghouse, we were dealing with speech intelligibility issues; in the new room upstairs in the [Marsh Building], the challenge was a very small space with very high ceilings,” he explains. “The architecture didn’t lend itself to acoustical treatments, so we had to rely on the high directionality and tightly focused pattern control of the F1 speakers. And that’s just what they delivered. Bose was the best option available for a situation like that.”

Drew Shattuck, the Finance Manager at First Church of Christ, agreed. “The new Bose system made for a successful transformation of the room into a much more flexible, multipurpose space,” he says. And Shattuck also points out that the Bose RoomMatch Utility RMU206 and RMU208 speakers used in the Meetinghouse provide a lot of sound coverage with very few speakers, which helped maintain that venue’s Colonial-era aesthetic. “That was another reason we were very receptive to the idea of using Bose again for this next project,” he says. Furthermore, as importantly, the Bose F1 system is extremely user-friendly, which lets a much wider range of users access the system without requiring technical help on site.

The church specified that the sound system needed to have distinct operational modes: acting as a performance-type space with a manned mix console, and as a conference- and presentation-type space in which any number of users could access the system as needed. “The contemporary worship band that rehearses and plays in this space has its own sound person to run the sound system,” says Shattuck. “But when we have other groups come in, such as the Bible study class that meets here now, they can turn the system on, put in a DVD player and use the microphones, without any specialised training or technical skills. That’s really the best part — with the Bose system, we have a great-sounding space that everyone in the church can access. Bose has become an important part of the day-to-day functionality of First Church of Christ, Wethersfield.”