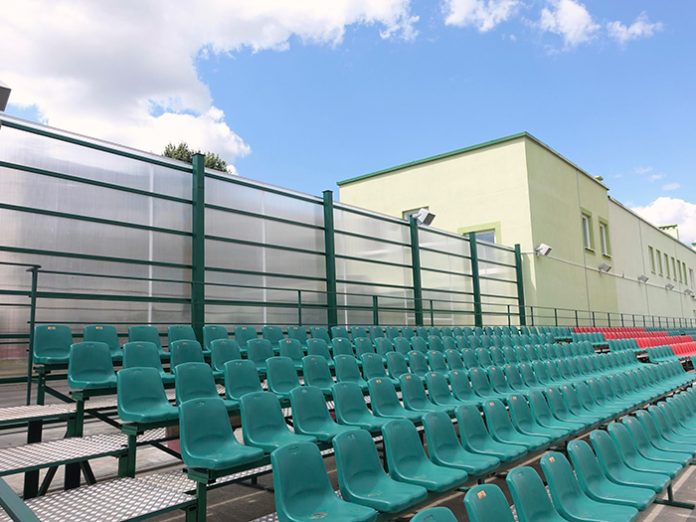 The ancient city of Bobruisk, in the Mogilev region of Belarus, is celebrating the opening of its new Alexander Prokopenko Stadium. Named after the famous Dinamo Minsk football player, Alexander Prokopenko, the multi-purpose stadium is designed for football and athletics and also incorporates a separate volleyball/basketball field. The stadium has a seating capacity of 1,500, accommodated by the main and opposing spectator stands running down the length of the playing field. With a heated playing surface, the stadium can be used all year and its primary use is for youth football training.

The audio system for the new stadium was designed and installed by Art Ramos Studio. In addition to planning for harsh winter conditions, Art Ramos Studio also had to design the system to meet the stipulations that loudspeakers could not be pole mounted in front of the seating and there should be no cable routes to the second stand on the opposite side of the football field.

To provide premium quality audio with high intelligibility in all weather, Art Ramos Studio designed the system around Community’s R SERIES loudspeakers. For the main stand they used sixteen R.35-3896, eight-inch ultra-compact horn-loaded triaxial three-way loudspeakers, distributed along the length of the stand behind the seating. As no cable runs could be used for the second spectator stand, they covered this with two high power R2 loudspeakers, firing from the main stand with tight pattern control providing even coverage over distance. CAD system design was used to ensure the correct choice of loudspeakers to provide the optimum coverage and required SPL across all seating areas.

“As soon as we plugged in Community’s pre-sets for the loudspeakers the results were exactly as we had planned,” said Anton Streltsov of Art Ramos Studio. “The system performs superbly with excellent clarity for every seat in the stadium. Community R SERIES also assure the system’s long term reliability.”