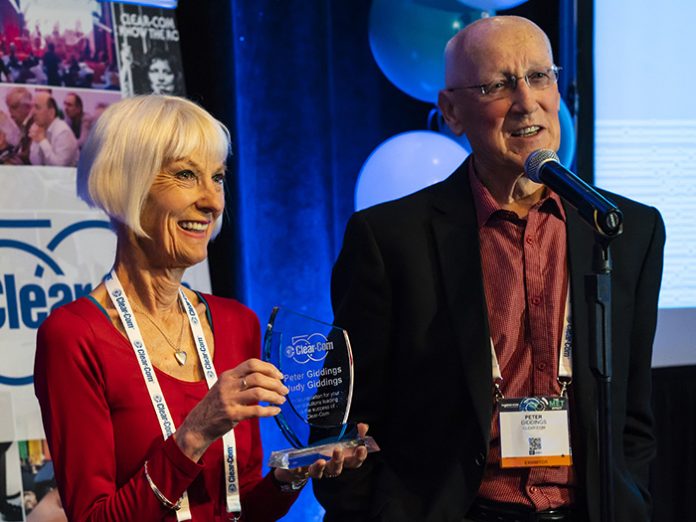 With great sadness, Clear-Com announces the passing of Peter Giddings. Peter, who always worked closely with his wife Judy, was highly influential in Clear-Com’s direction and ongoing success during his tenure of over 40 years with the company.

Before joining Clear-Com, Peter and Judy were instrumental in introducing important European brands to the US marketplace, including Beyerdynamic, Revox and Studer.

Peter first came into contact with Clear-Com’s co-founder Bob Cohen in the early 1970s while representing Beyerdynamic, which provided headsets that worked with the Clear-Com intercom systems. While at Clear-Com Peter and Judy introduced and expanded the brand in international markets, playing a major role in developing the company’s global presence.

Peter was instrumental in developing a strong international distributor network in areas of the world that were challenging to do business in during the 1980s and 1990s, including China, India and many parts of Latin America.

Peter’s sense of live events-based communications was driven by a strong appreciation for professional audio engineering alongside a personal passion for motorsports; he worked to develop communications solutions for professional race teams and built relationships in this demanding market segment that are still delivering results today. His understanding of the special requirements needed for large-scale events also influenced Clear-Com’s early activities in the sports sector and was instrumental in developing the company’s ongoing
involvement in such high-profile global events as the Olympic Games.

“The Clear-Com community mourns the passing of one of our founding visionaries who did so much to bring us to where we are today,” said Bob Boster, President, Clear-Com. “Not only did he open up many new markets, but we also recognise how important Peter and Judy were in the development of certain products within the Partyline portfolio, some of which have carried forward in subsequent developments to serve critical customer needs even to this day. Peter was one of a kind, and we will miss him immensely.”

Judy Giddings encourages anyone wishing to make a donation in Peter’s memory to support a local animal welfare organisation, in recognition of Peter’s devotion to his beloved dog Havoc.