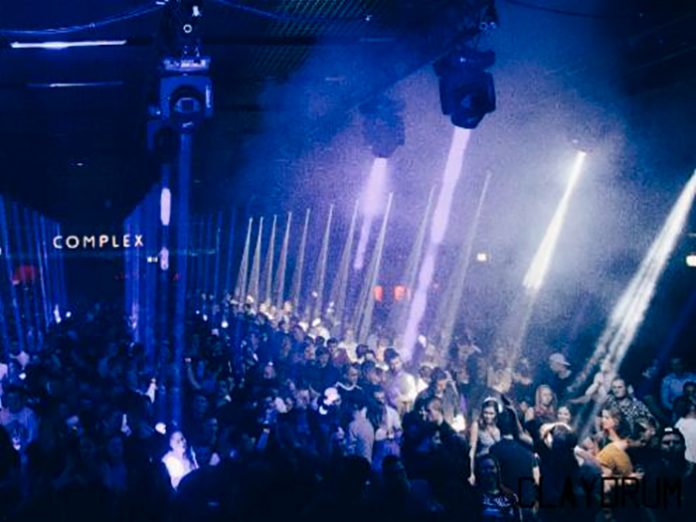 Nearly 100 Claypaky Sharpys were exclusively selected to deliver an immersive eight-hour light show to 2,000 partygoers at an underground club night that was hosted by trailblazing Dutch techno music agency Claydrum at Complex nightclub, Maastricht for their New Year’s Eve celebrations.

“We wanted a fixture that could deliver perfect beams of light that were easy to see, even with colours that are normally less visible, like red and UV,” said Joël, who utilised the Sharpy’s 14 option colour wheel in conjunction with its interchangeable gobo wheel, strobe effect system and eight-facet rotating prism in the design.

“The Sharpy offers an impressively high output and has always proved reliable,” explained Joël. “The fixture provides a very precise, very tight beam with almost no spread; this helped us to achieve the angular effects we wanted for the dance event.”

To create lighting looks that fitted with the fast beats of the night’s popular DJs, Joël rigged a series of eight flown trusses hosting a grid of 12 Sharpys each to ensure a tight, uniform formation of beams. Using the Sharpy’s super quick PAN (540°at max 2.45 sec) and TILT (250° at 1.30 sec) movement Joël created a dynamic, interweaving light show that, through the clever use of mathematics, at times appeared to bend the the Sharpy’s 0°- 3.8° adjustable light beam.

“We were able to achieve the light show’s precise geometry by focusing on the rigging and the placements of the fixtures,” revealed Joël. “We drew a grid on the floor to get the perfect alignment for the Sharpys and every one of the 96 fixtures was adjusted by hand. It took some effort but was absolutely worth it. I must credit Lars Aarts from TYS Productions for his determination in getting everything aligned impeccably.”

Using such a large number of high-performance fixtures in a relatively small nightclub space meant temperature was a concern for the Stöd team. Joël relied on the inbuilt cooling system on the Sharpy to confidently use the fixtures continuously all night without worry of them overheating or making the dance hall too hot for audiences.