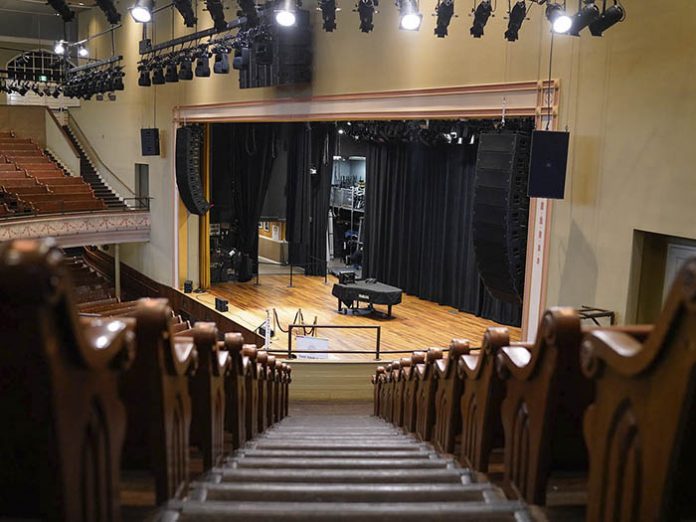 Ryman Auditorium in Nashville, Tennessee is best known as the home of the Grand Ole Opry radio broadcast between 1943 and 1974. Its age and cultural significance led to its inclusion on the National Register of Historic Places in 1971. One of the most prestigious music venues in the world and a coveted, bucket list under-play for artists across all genres, it’s iconic stage has seen the likes of Bruce Springsteen, Mumford and Sons and Harry Styles.

In partnership with Opry Entertainment Group, JBL, and Yamaha, audiovisual integration firm Clair Solutions recently completed a significant overhaul of the Ryman’s sound reinforcement system, which required a lot of up-front due diligence and testing, sensitivity to the venue’s historic interior, and a deft installation to work around Ryman’s packed calendar.

“We installed the Ryman’s previous sound reinforcement system over a dozen years ago,” said Dan Heins, Regional Vice President at Clair Solutions. “It was a first-generation JBL VerTec system that served them well, but loudspeaker, amplifier, and DSP technology has come a long way since then. We’ve maintained a close relationship in the interim. The folks at Opry Entertainment Group are really passionate about great sound, and they wanted to be sure that they would be getting the very best system for the space.”

JBL’s new VTX Series A12 System rose to the top, but the Ryman engineers wanted to hear the system in-place before fully committing to the installation. Clair Solutions developed an EASE model and optimised a design in collaboration with JBL engineers Raul Gonzalez and Nicholas Mourn. JBL provided an entire demo system that Clair Solutions put in place on temporary lifts. “It was a real proof-of-concept,” Dan said. “We learned a lot from the demo and decided to go from eight boxes a side to 10. Although the main system didn’t change much from its original design, we learned from the demo that the under-balcony system needed a complete re-think. Given the particulars of the space, we ultimately went with a miniature line array with sub support”

The installed system consists of 10 JBL VTX-A12 three-way line array elements and eight JBL VTX-S28 subwoofers in a centre hang. Two JBL CSX-F35s provide side fill, and 10 JBL VT4886 line array elements provide front fill. A total of 36 JBL VT4886s paired with eight JBL VT4883 subwoofers make listening to a concert under the balcony every bit as exciting as the main floor. Crown i-Tech series amplifiers with onboard DSP condition and power the system. For the consoles, two Yamaha RIVAGE PM7 digital audio consoles were the preferred selection of the Ryman team based on their experience using the Yamaha PM10 console at the Opry House. “Based on our experiences with the PM10, we were confident with our decision to add the dual PM7 consoles, without a formal demo, due in part to Yamaha console familiarity and reliability,” stated Jeff Hatfield, director of technical services for Opry Entertainment Group.

“Finding a window in which to perform the installation wasn’t easy because the Ryman doesn’t really close,” Dan said. “We only had four days to remove the old system and install the new system – a Monday through Thursday, with a show the very next day. We worked with the Ryman engineers and did everything that could possibly be done ahead of time while the old system was still on line. For example, we put in conduit and upgraded the electrical system. We started on Sunday to give us an extra day to maximise the time we had to perform the installation. Things went smoothly, and we had the new system up and tuned in time for Friday’s Opry at the Ryman show. Importantly, we made it all happen without upsetting any of the Ryman’s historic interior or its sight-lines.” The PA was moved into the proscenium in order to bring the image into a more natural alignment with the performance.

He continued: “This was a great collaboration between four iconic companies: The Ryman is known as the Mother Church of Country Music and is one of the most well-known and well-loved venues in the country, JBL is a legendary American brand, Yamaha is world-renowned, and Clair Solutions has built their stellar reputation by pushing the envelope to create the best live sound experiences possible. The Ryman is committed to making sure that every fan gets the best possible experience.”

Les Banks, production manager and audio supervisor for Ryman Auditorium added, “In the world of speaker and amplifier technology there have been great improvements in the last 10 years. Earlier this year, Dan Heins and his install team at Clair Solutions, once again, performed a miracle by installing our new JBL A12 system in an extremely short period of time. It’s of great comfort to have the support of the Clair Solutions team only a phone call away. The bottom line, end result is touring engineers give it a thumbs up and say how greatly improved the coverage and clarity is. Truly a team effort between JBL and Clair Solutions.”