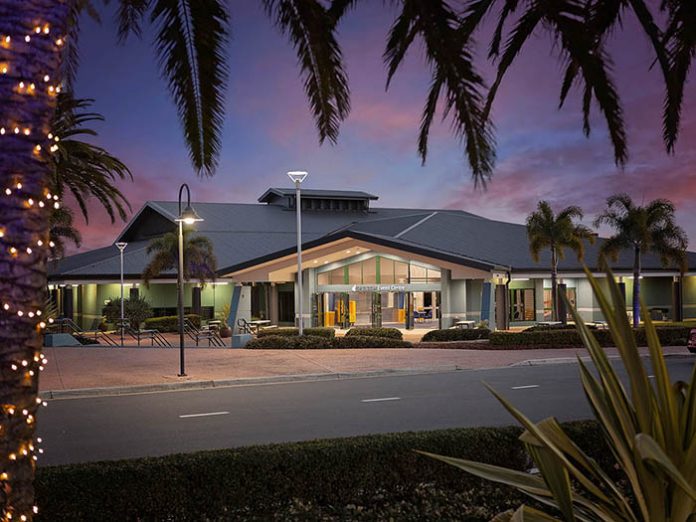 Sheldon College is an Independent, Co-educational, Non-denominational College located in Brisbane’s Bayside, in Australia. Committed to its philosophy of Love, Laughter and Learning, Sheldon College educates children from ages 15 months to 12 years. Established in 1997 with a campus covering fifty-six acres of semi-rural land, the College is committed to providing quality student exit outcomes characterised by maintaining high standards that enable students to succeed in an ever-changing world. Sheldon students become self-directed learners, effective communicators and collaborators, creative problem solvers and innovators skilled in core literacies. Clair Brothers believe in these very same principles, so when called on to upgrade the College’s multi-purpose hall with a reverb trouncing loudspeaker system, the award-winning manufacturer jumped at the chance.

This wide open, multi-purpose space is approximately thirty metres wide by thirty-five metres long and hosts indoor hardcourt sports, assemblies, music, drama and dance performances for more than 15-hundred students, their teachers and parents. The space is also hired out to the community and is the largest event centre in the region. David Freeman, sound and music technology specialist at Sheldon College said that: “As happens in venues like this, with hardwood floors under an open steel beam ceiling structure connected by hard flat walls, acoustical challenges and long reverb times are the norm. The old system seemed to accent the problems.” It turns out what the school needed to do was replace the existing mono system comprised of seven separate cabinets, a three-speaker centre cluster and two lines of delay speakers. That system had poor speech intelligibility for presenters because of low gain-before-feedback from roaming wireless mics. The sound wasn’t focused to the stage and the system had no effective dynamic range, distorting every time it was pushed harder for music and dance productions. In fact, the College had to pay to rent an additional PA system for their larger events and concerts while using a portable system on stands to help fill in the coverage holes and add some bottom end.

David continued: “The system badly needed an upgrade. Sheldon College prides itself on the quality of the Australian School of the Arts Programme in Queensland, but the old system did nothing to capitalise on the premium quality of bands and music ensembles or to reward the hours of practice put in by individual musicians and performers.”

The College recently invested in a substantial digital upgrade to its in-house video systems using high-quality projection equipment and media equipment. The sound system quickly became the weakest link. A high-quality solution, to bring the audio system up to the level of the new video system became critical. The new system needed versatility, from single lectern mic presentations and solo music performances to high-impact dance performances and large concert events; performances involving a forty-piece student orchestra, a one-hundred-voice choir or shows with 20-plus stage performers using handheld and headset wireless mics are common.

Julian Stirling, sales and design manager at Integration Partners, the installation company hired by Sheldon College, explained the process, “The College had their eye on purchasing a plastic box line array from a large international audio brand, but we were asked to provide an alternative. That’s when we gladly approached Wayne Grosser, Clair Brothers’ expert audio consultant in Australia, who arranged to loan a loudspeaker system for Sheldon College’s most important event – the Annual Arts Academies Awards Ceremony. This loaner system from Clair Brothers was a more than 20-year-old touring rig that performed so well, that it drew unsolicited comments from staff and parents, that they had never heard better sound in this hall. This impromptu demonstration opened the eyes and ears of the College’s decision makers to what was possible from compact cabinets and proved they didn’t need a line array of six or eight cabinets per side as the solution for bouncy reverb and feedback.”

It was decided that an intelligent replacement for the old design would be a multi-purpose stereo system that could dispense wide horizontal dispersion across the entire front of the room while delivering tight vertically-directional coverage aimed to limit reflections from the hard floor and back wall. The result was the hanging of two active Clair Brothers kiTCurve cabinets, five metres in the air on either side of the stage, supplemented by four active kiTSubs on the floor. Freeman happily points out, “It’s a perfect solution. This combination of speakers easily outperforms anything the College has ever used in this venue before.”

“The Clair Brothers kiTCurve and kiTSub system meets all requirement,” concluded Julian. “Very clean and detailed at low volume for speech and individual performances with untapped headroom and huge dynamic range for high-impact music. Frankly, I’ve been installing sound systems for more than thirty years, and the kiTCurve system is by far the best sounding, most effective 12-inch-plus horn cabinet I have ever used!”