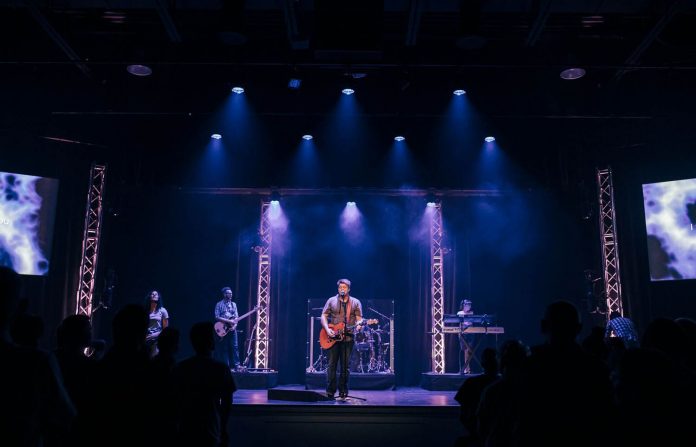 LCBC Columbia-Montour is a satellite campus, a sister church if you will, one of many in Pennsylvania that are part of a growing congregation born from the original LCBC in Manheim, Pennsylvania. People enter the impressive and welcoming lobby of the church, gathering with anticipation and shared knowledge that something exciting is about to happen. Seats are taken in the sanctuary, lights are lowered, and music begins. A live band is on stage, teasing forth deep bass notes with a kick drum beat designed to move a crowd. Electric guitar and keyboard interplay build around the beat, creating a sound that is the pillar of the LCBC brand and the reason why so many come to LCBC. Lyrics project on a giant screen and the congregation sings along, a preamble to a sermon from their pastor – a sermon projected onscreen as a live simulcast from the main church in Manheim.

It was Clair Brothers who were originally called fifteen years ago to design and install sound systems that best replicate the signature sound of the Manheim church. The sound achieved is the heart-thumping low-end that drives the live band’s music – a sound LCBC wanted to re-create at the new Columbia-Montour campus. So, when Sean McDermott, central production manager overseeing all audio, video and lighting production for LCBC called, Clair Brothers was ready. McDermott explains: “One of the main reasons people come to LCBC is because of the music and how it sounds. Clair Brothers has become part and parcel to recreating that sound in all our campuses. No matter what the design challenges are within each new space, they always find a way to make it work.”

One of the challenges presented to Clair Brothers at Columbia-Montour was the seating capacity difference between the two locations. The main church auditorium seats up to 2,300 people, whereas the LCBC Columbia-Montour campus seats 650. It’s a smaller space, which meant that re-creating the low-end sound LCBC is known for would require a new system configuration. Despite additional and very specific venue architectural differences, Clair Brothers came through with flying colours.

In the particular case of Columbia-Montour, it was not a from-the-ground-up new construction, but rather a reconstruction of a portion of a retail grocery store space that could accommodate LCBC’s need for a new auditorium sanctuary. As is often the case with the renovation of an existing retail space, the ceilings are relatively low.

In this situation, the space was limited to only twenty-three feet of height from the ground to the ceiling bar joist. Yet, LCBC still wanted to replicate the full low-end sound Clair Brothers brought to its other campuses. It’s a relatively modern change in church services where the music is performed by a full live band that’s more akin to a rock show than a church service. In their effort to achieve LCBC’s sonic vision, along with the accommodation of the video projection and sightline to stage feel, Clair Brothers suggested their C15 speakers as the best way to go. After consulting with McDermott and the LCBC team, demonstrating to them the capabilities of this C15 configuration at the Clair Brothers soundstage, the decision was made to install six C15 boxes on each side of the stage at Columbia-Montour, along with a cardioid array of four Clair Brothers S218 subwoofers in the middle of the room, powered by six Clair Brothers/Lab.gruppen D-Series 120 amplifiers.

Other highlights of the configuration are no delays, no front-fills and no out-fills. McDermott points out,:“This is the PA system in its entirety. Not only does this configuration deliver our signature sound, it fit perfectly within budget. And that always makes us happy.”