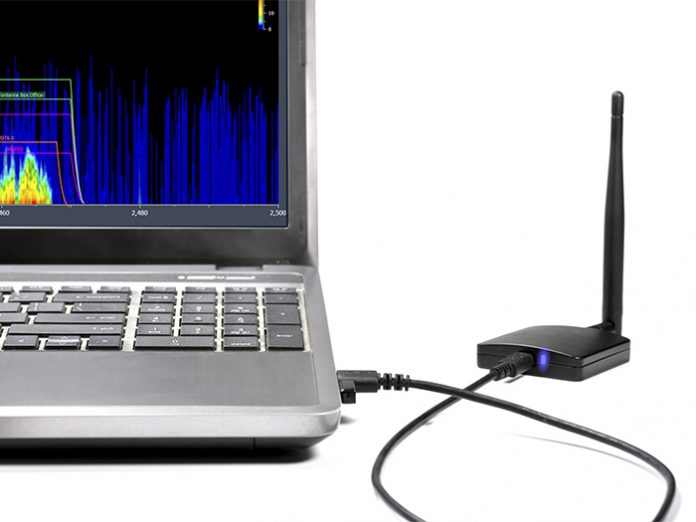 RadioScan shows all nearby radio activity in a chosen frequency, including frequency hopping gear like wireless DMX, as well as Wi-Fi networks, Bluetooth, wireless headsets, video transmitters, cordless phones, baby monitors, and microwave ovens. RadioScan can display spectrum data either in Spectrogram View or Waterfall View, and snapshots can be taken of both in the program. With RadioScan, scans of unlimited length can be recorded, saved, emailed and played back with the RadioScan software, without the need for the RadioScan hardware dongle.

By identifying SSIDs, broadcast channel, and the signal strength of wireless networks, RadioScan can help IT departments setup, maintain, and troubleshoot their wireless installations.

The RadioScan hardware dongle is a 2.0” by 2.0” by 0.5” square that fits in your hand or pocket, and is made of rugged NEMA 4 IP20 ABS Plastic. Its detachable external omnidirectional broadband, 2dBi 900MHz, 4dBi 2.4GHz antenna allows for 900MHz and 2.4GHz dual band spectrum analysis. RadioScan comes with a USB-C power/data connector with 1m USB-A to USB-C cable.

RadioScan is CE certified and compliant with FCC, IC, and RoHS standards. RadioScan is designed and built in the USA by City Theatrical.

RadioScan is compatible with both PC and MAC computers.