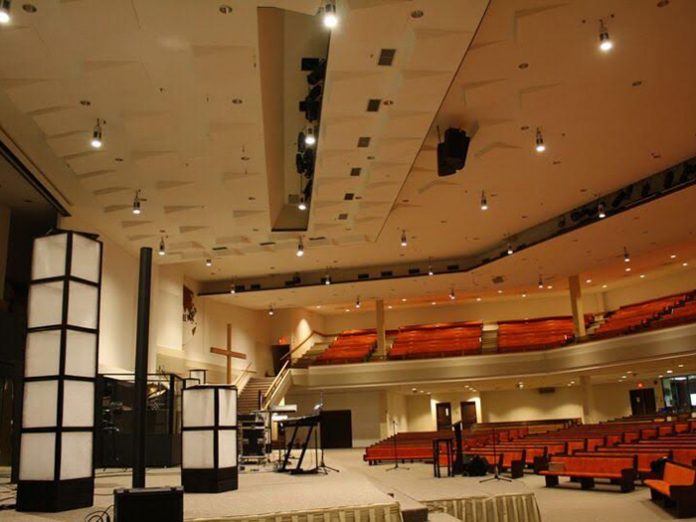 When Circle Drive Alliance Church was in need of ceiling repairs, its leaders saw it as an opportunity to enhance their members’ worship experience by adding a new LED lighting system anchored by Ovation fixtures from Chauvet Professional.

Taking advantage of the scaffolding that was put up for the ceiling repairs, the church decided to upgrade its existing house lighting from the original pot lights to LED fixtures. “The scaffolding served as a kind of catalyst for the lighting project,” said Keith Fitzgerald, of Production Lighting, which sourced the Ovation fixtures from Erikson Pro, Chauvet’s Canadian distributor. “Our company has been servicing the church for over 30 years, so when the idea of changing the lighting system came up, we were contacted.”

Originally the church wanted Production Lighting to upgrade the lighting control system and simply install LED lamps in the existing pot lights. Production Lighting conducted a number of tests on different LED retrofit lamps. This testing clearly demonstrated that the retrofit light sources would not be capable of providing the church with the smooth, consistent dimming it needed.

“Dimming was essential for this church, which often includes theatrical, musical and other entertainment functions in various services and events,” said Keith. “We felt the only way to achieve the results the client needed was to go with a DMX controlled – constant voltage type fixture. As with any venue that requires more than just utility lighting for basic tasks, it is important to have a fully dimmable system. Circle Drive Alliance needed a full theatrical lighting system. Having the ability to fade the house lighting out or leave it parked at low level is a necessity in this type of setting.”

Production Lighting positioned 41 Chauvet Ovation H-105WW house lights throughout the church. These fixtures are evenly spaced, approximately 16 feet apart throughout the entire sanctuary and stage area and are divided into six zones. This division allows separate control of the stage lights and the rows of fixtures from the front to the back of room. A 96-channel control console is used to run both the theatrical lighting and house lights. Plus, a pair of 10 preset wall controllers located at the main entrance are used for general control.

“Unlike the LED retrofit lamps that flicker and pop on at different levels, the Chauvet fixtures were all consistent and have a nice proportional dimming curve,” continued Keith. “Having the assortment of lens options helped in achieving an even, consistent light level throughout a space with various elevations. The other big plus with the DMX controlled fixture was the savings of not needing a dimmer rack to control the fixtures.”

Keith also found the Ovation fixtures easy to install since they were configured in a pendant. “The fixtures saved time and money,” he said. “Budget is always a factor, and the cost of a proper fixture is considerably more than using a retrofit lamp. But when you consider the life of the product and the fact that you don’t require a separate dimmer rack for control, it does make sense.”

The intensity of the Ovation fixtures was singled out for special praise from Fitzgerald. “Some of the H-105WW house lights were positioned 30 feet above the floor,” he said. “Even with the wider output lens being used, the fixture had good output at a long throw distance. Another thing that we like is that powering the fixtures is simple, since we’re able to run many off the same circuit.”

Thanks to the output of the H-105WW, the church is able to be illuminated a higher levels than it was with the previous lighting system. As a result, everything at Circle Drive Alliance Church is looking better and more engaging with the new lighting system in place, including the recently repaired ceiling.