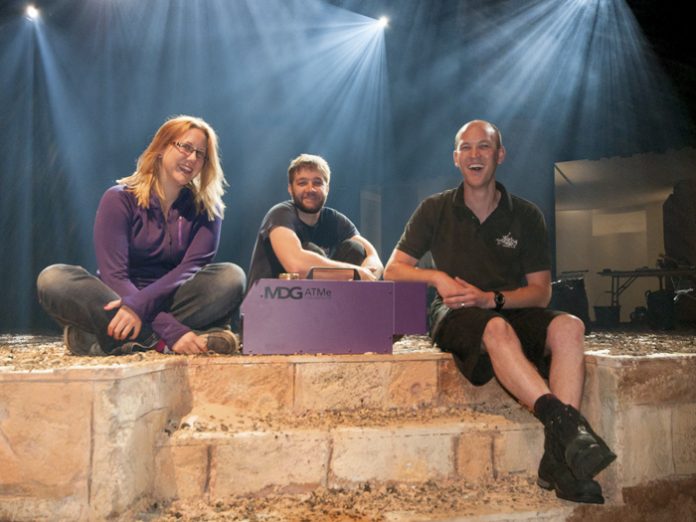 “The main driving factor behind our investment was the need for greater controllability than the on/off capability offered by our existing AtmosphereAPS units,” said CFT’s Head of Lighting and Technical Manager, Sam Garner-Gibbons. “We have a purpose-built atmosphere generation system that sites the generators and fans above the rear of the audience and ducts CO2 gas through copper pipes to gas canister storage locations back of house. The units are placed front of house so the venue’s air handling system pulls the haze across the stage to create the optimum coverage. Because we are a very exposed venue, any fan noise and or excess haze output percolating around the upper audience level could be distracting to the audience.” It was clear that controllability would be paramount when addressing these issues.

Sam first encountered the ATMe haze generator at PLASA 2015 on the MDG UK stand where Matt Wiseman showed him its new features: “It was the ATMe’s new level of controllability that instantly attracted us to it,” he said. “In addition to the MDG quality haze, you have complete control over the amount, timing, pressure and saturation of the haze. It seemed like a sensible investment and in-house tests gave us positive results, which culminated in the purchase of two ATMe generators and two theFAN units.”

The two ATMe units are installed in Festival Theatre where they have been busy since day one. The 2016 season saw lighting designer Paule Constable employ them on the critically-acclaimed production of Half A Sixpence, while they were also used to great effect on the RSC double bill Much Ado About Nothing and Love’s Labour’s Lost lit by Oliver Fenwick, An Enemy of the People lit by Mark Henderson, and Ross lit by Paul Pyant – all of which featured haze heavily.

Constable voiced her pleasure at having the new units at her disposal: “It was joyful to have the control that the ATMe offered which was dead impressive,” she said. “We didn’t get to play with theFANs as the rate was good without them – but having DMX pressure control is just excellent… and consistent. I’ve always loved the quality of haze the MDG produces, but we found you were constantly riding the unit – turning it on and off and creating complex chases. Being able to control the output with the new unit makes a huge difference. ‘At last!’ was my main thought!”

Warren Letton, who programmed Half A Sixpence, agreed: “We were really impressed! The ATMe units gave us a very nice remote control of the output (finally!) which we utilised a lot! They are very nice units.”

TheFANs, on the other hand, have been less busy! “Our original intention with theFANs was to provide back up in case we needed to direct the haze away from those problem areas around the upper audience levels,” explained Sam. “However, such is the level of controllability of the ATMe units, we have not needed to use theFANs in the back of the auditorium. Instead we have adopted them on stage where they are very portable and efficient in pushing around smoke effects! They did a great job in sending ‘smoke’ out of the crocodile’s mouth in this year’s Christmas show, Peter Pan!”

Overall, the team at CFT are very happy with their purchase. “The MDG investment has proven just what we needed to upgrade our system,” confirmed Sam. “Both the units have given faultless performances and we have also found the new ATMe has been much more frugal on fluid as a result of its controllability which is a big improvement. It is now possible to fine-tune the effects from a fan speed that is much lower and quieter, up to full speed for quick delivery. We are able to introduce haze gradually at a lower level which means it does not escape into the audience or distract with fan noise.

“MDG has always produced the best quality haze, now we have it with complete controllability.”