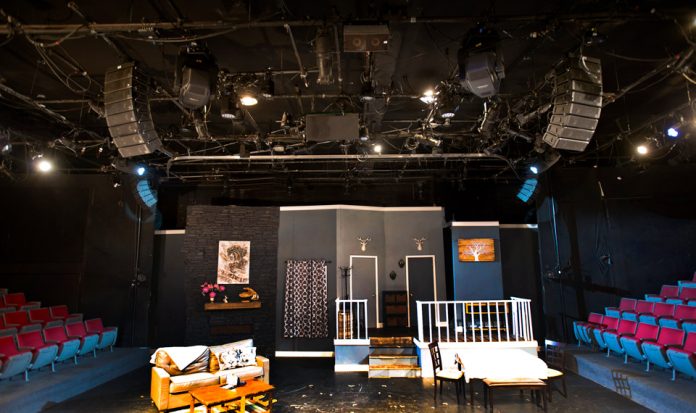 According to Apollo owner Rob Kolson, the decision to upgrade the audio system was made after the rock ‘n roll musical Million Dollar Quartet concluded after a seven-year run at the venue.

“The house system was simply not robust enough for their needs, so they brought in their own PA for the duration of the run,” explains Kolson. “When their stint was over, we began an extensive renovation and decided it was the right time for a proper audio upgrade as well.” Kolson continued, “I was determined to do this right. I really wanted a state-of-the-art system that would compliment the intimate nature of our room, while easily handling a variety of music styles, as well as spoken word.”

To achieve his objectives, Kolson contacted Bryan Bilgore and the team at Sensorium AVR, whose impressive projects include the exclusive Luckman Club at Soho House West Hollywood.

“For the Apollo, our objective was to achieve 270 degrees in the horizontal plane, while ensuring adequate vertical coverage without the need for additional front fill speakers,” explains Bilgore. “In addition, we also needed to deliver maximum intelligibility, since this is a very ‘live’ room that has to work for a variety of performance styles.”

“The beryllium HF drivers in the VUE systems deliver dynamic range and a level of intelligibility simply unmatched,” remarked Bilgore. “Plus, the al-4’s coverage is so well controlled, that we were easily able to ensure ideal vertical coverage, while avoiding the overspill that was troublesome with the previous system.”

A pair of VUE as-418 quad 18-inch isobaric subwoofers deliver ample low frequency extension, while a total of six VUEDrive V4 Systems Engines provide all power and processing for both line arrays and subs. A Yamaha QL5 digital console rounds out the design.

“We’re still fine tuning the system as different types of acts come through, but overall I couldn’t be happier with the results,” concluded Kolson. “I’m confident that we can easily handle anything that comes our way. It simply sounds fantastic.”