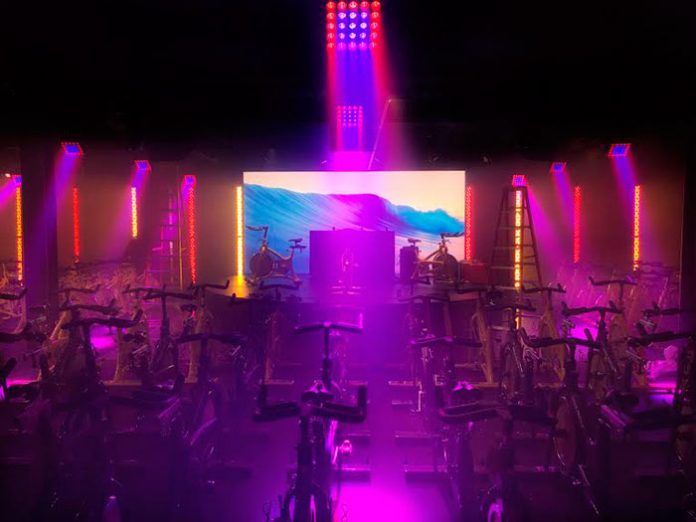 Millions of Americans are motivated during their daily exercise routines by listening to Rachel Platten’s “Fight Song” on their music devices. Recently, a group of guests got to hear the singer perform her smash hit live as they worked up a sweat pedalling indoor cycles alongside Hilary Duff andGlee star Lea Michele at an upscale “cardio party” in Manhattan’s trendy Meatpacking District.

The invitation-only event celebrated the launch of a 10-city coast-to-coast fitness tour sponsored by Target and SoulCycle. In addition to Rachel’s uplifting vocals, the 150 health-minded attendees at the launch party were pumped up by the beats laid down by DJ Irie of Miami Heat fame. Setting an equally inspirational tone at the exercise fest was a Barrett Hall designed light show anchored by 45 Next NXT-1 moving LED panels from Chauvet Professional that were supplied by WorldStage.

Hall, the owner of Magic Hour East, designed the show to reflect the verve and élan that has made SoulCycle one of the hottest names in the fitness industry. Founded 10 years ago, the indoor cycling chain has attracted a passionately dedicated following, particularly in New York and California, by making fitness fun with its energetically choreographed group exercise sessions. The chain’s hip aura caught the attention of Target, which partnered with it on the 10-city tour.

“SoulCycle is all about enthusiasm and excitement,” said Barrett. “We want to capture this spirit by creating a dynamic lighting design. The Next NXT-1 panels were instrumental in helping us achieve this goal by allowing us to create a lot of movement in an indoor cycling Ride Room space that wasn’t really designed to house a light show.”

Barrett utilised the Next NXT-1’s virtual gobo wheel to modify channels for gobo maps and indexing. “The built-in gobo wheel feature gave us plenty of shapes and looks to choose from while cutting down on our overall programming time,” he said. “Our programmer Eric Christian also had a lot of fun busking on this one with chase scenes. He matched the look and feel of our video wall content on the Next NXT-1 moving panels during DJ Irie’s set.

The Next NXT-1 fixtures’ RGBW 10-watt OSRAM LED fixtures produced a variety of colours during the event, with special emphasis on Target Red and SoulCycle Yellow. “We got great matches on the logo colours,” said Barrett. “Both sponsor logos are circles, so it was nice to introduce some contrast by showing them on a square-faced fixture like the NXTs. Plus, just in general, the square facing and movement of these fixtures introduced some nice visual variety to the design.”

Barrett and his team certainly got their exercise in at this fitness event by working hard to meet tight deadlines. “The NXT-1 helped us stay on schedule, because the built-in virtual gobo wheel cut out a lot of programming time, and the fixtures were also easy to hang on truss. We had to move quickly on this project, but our gear and the efforts of our team, Eric Christian and lighting director Susan Nicholson – plus Drew DeCorleto and J Wiese from WorldStage – made all the difference.”