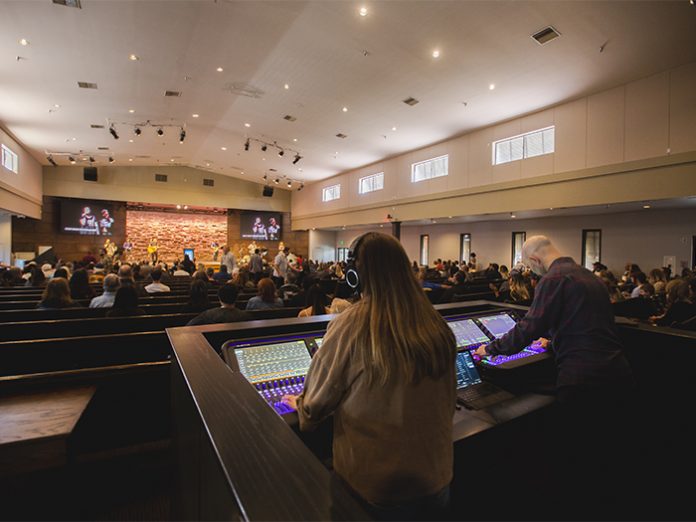 When Calvary Chapel of the High Desert in Hesperia, CA was looking to upgrade their entire PA system, they contacted E2i Design – a total solutions provider that specializes in full-service House of Worship technology and installation.

“We’ve got a very deep bench – everything from IT, audio, video, lighting, streaming, construction, and architecture,” said Evan Hamilton, CTO of E2i Design. “We can pick up a project at basically any phase and run from there.”

The church was managing with 26-year-old technology, but sought something more powerful and user-friendly for volunteers. “They were unhappy with the flow and format of their existing console,” noted Hamilton. “They also were looking to add a separate mixer to handle broadcast and streaming of their services.”

The design team at E2i, led by Install Manager Jason Horn, suggested Allen & Heath as the optimal solution for their mixing consoles, specifically two 64-channel Avantis desks; one handles their FOH and monitor mixes, while the second is dedicated to broadcast/streaming. “Avantis, bang-for-the-buck, is the number one desk on the market right now,” said Hamilton. “These were probably the 25th and 26th Avantis consoles we’ve put in – we’re always happy with them.”

The third mixer based on the Allen & Heath 96kHz XCVI FPGA engine, Avantis puts next-generation technology in a 64 channel / 42 configurable bus console, with dual Full HD touchscreens, a super-flexible workflow with Continuity UI, extensive I/O options, add-on processing from the flagship dLive mixing system, and a rugged full metal chassis. With two I/O Ports, both capable of 128×128 operation at 96kHz, Avantis was a top choice due to its capacity for expanding and connecting the Calvary Chapel system via an optional Dante card and the possibility for future expansion via MADI and gigaACE if necessary.

For connections at the stage, they went with five of the Dante-enabled DT164-W wall-mounted I/O boxes – adding network flexibility and reducing cabling significantly. “They had 60 channels of analog snake. We pulled all that out and replaced it with a single CAT6 cable,” said Hamilton. All DT stageboxes simply connect to a single Dante card in the FOH Avantis. The FOH console ultimately connects to a newly installed array of d&b ALi60 loudspeakers which are powered via d&b 40D amplifiers.

Since the installation was completed in late March of 2022, Hamilton has received plenty of positive feedback from the users at the Church. “We didn’t realise how bad our sound and operations were until E2i Design installed this system,” noted worship pastor Blake Ormonde. “The ease of use with the Avantis boards for our volunteers has been a game changer. The clarity of our new system is top notch and has provided better quality worship for our congregation to engage in. We couldn’t be happier with the new install!”