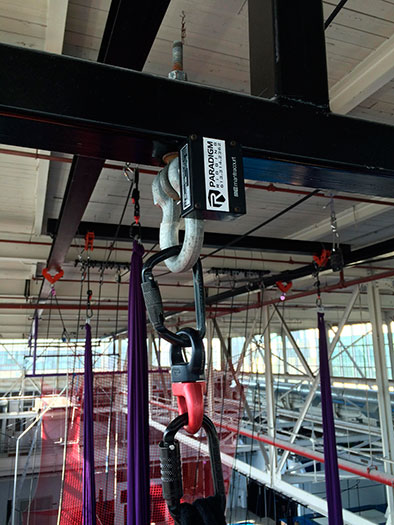 The Toronto School of Circus Arts is the largest circus school in Ontario, offering circus classes for adults and children as an alternative for active lifestyles. The state of the art, 15,000 sq ft training centre is housed in a renovated airplane hangar and features the most up to date circus arts equipment available. The School prides itself on its safety record so when the school needed to set up a bungee apparatus in another venue for a performance, theBroadWeigh wireless load cell monitoring system was used to help determine the maximum dynamic loads placed on the structure during a bounce.

Michael Sorowka, CEO of Paradigm Rigging, BroadWeigh’s technical partner in Canada, explained: “A friend of mine is an aerial and trapeze instructor at the school so I was familiar with the venue. Having introduced them to the BroadWeigh system, we arranged an opportunity to demo the units on their trapeze nets. The system got the seal of approval from Decker LaDouceur, owner and director of the school, and it became apparent that it would be the perfect tool for a bungee performance that was being planned.”

Decker, a flying trapeze coach, continued: “On understanding just how the BroadWeigh system would work for us, I was keen to put it to the test. The bungee act was going to be put on at another venue and the engineers there required solid numbers of the maximum loads placed on the structure during a routine.”

The act sees a performer wear a harness which is clipped into 2 bungees, attached to the building structure. They are lifted up to a static trapeze bar via a scissor lift, and climb onto the trapeze bar while the scissor lift moves out of the way. From this point the performer jumps off the trapeze bar directly downward and uses the bounce to perform a variety of flips and positions in the air. At the bottom of the bounce the performer pushes their weight downward as much as possible and simultaneously pulls on the bungees to launch themselves back upward to continue their act.

Using BroadWeigh load cell monitoring, the school was able to get accurate readings of the weight load that the performer placed on their rigging hardware and support structure overhead. “Previously, the only way of determining these numbers was by rough calculations or sometimes excessive estimates,” said Michael. “In fact the circus school was greatly surprised with how little weight was actually put on the structure. They were estimating the maximum weight was in the region of 800lbs, however BroadWeigh’s measurements gave just slightly above 400lbs – half the original estimate!”

Users of the BroadWeigh system cite flexibility and ease of use as two of the key benefits which put it head and shoulders above its competitors. Load cells can be installed in a matter of minutes and be providing measurements shortly after. Decker added: “With performing circus arts, budgets and time are often tight. There can’t be a lot of down time on the equipment for installation because there are performers waiting to train on the apparatus, so the BroadWeigh system is hardly invasive to their dynamic environments.”

Another factor is the expandability of the system. Often in testing situations a small number of shackles are needed at one point (between one and four units). However, should measurements be needed on items such as trapeze nets or multiple apparatus in a set up, BroadWeigh offers the flexibility to expand the readings with ease and without the additional hardware which some other similar systems might require.

Decker concluded: “Right from the start, we have been impressed with the ease of installation the BroadWeigh shackles offer. Within a matter of minutes, we were ready for the performer to attach to the apparatus, much less time than it would have taken for a wired system to be put in place. Once we started running through the routine, it was fantastic to be able to come back to the laptop and see the weight readouts for the performer.”