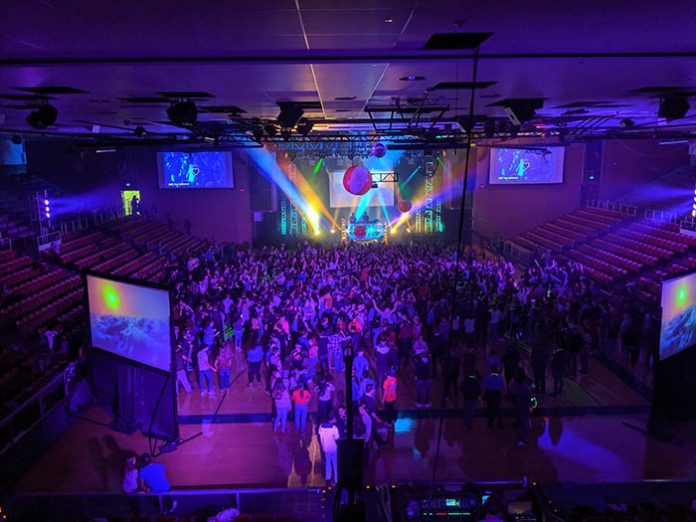 Brigham Young University-Idaho (BYU-I) has taken delivery of a complement of Ayrton Khamsin-TC and GHIBLI fixtures and Robert Juliat Lancelot followspots for its three theatres. ACT Lighting, Inc. is the exclusive distributor of both brands in North America.

BYU-I, formerly known as Ricks College, is located in Rexburg, Idaho and offers programs in liberal arts, including the sciences, engineering, agriculture, management and the performing arts. The university is owned and operated by The Church of Jesus Christ of Latter-day Saints.

BYU-I’s theatres host theatrical productions and concerts staged by students and visiting artists. BYU-I Center, the largest of the theatres, seats 15,000. The Hart Auditorium is a three-quarters arena that seats 3,700. The Snow Drama Theater, the smallest venue, seats 400.

The new fixtures were acquired from Barbizon Light of the Rockies in Denver as part of the lighting replacement cycle, noted Lighting Designer Braden Howard with BYU-I’s audiovisual productions. Although Howard had done freelance projects with Ayrton lighting the university did not own any Ayrton units before the purchase.

Systems integrator Peter Maurelli with Barbizon had worked with the university when it was Ricks College and provided the original fixture package and the moving light package for the Center. In conjunction with ACT Lighting Maurelli furnished Howard with Ayrton GHIBLIs and Khamsins for a PDM shoot out to determine which units to purchase.

“Ayrton had the best optics and feature sets for the money,” said Braden. “We liked the versatility of the shutters, lots of gobos and having the iris in the same fixture. The Khamsin-TCs were also designed for broadcast, and we broadcast live weekly keynotes and devotionals from the Center as well as concerts for PBS. We record all of our productions as well.”

Peter explained that it was important that Howard have a fixture that could deliver the 120-150 ft throws required in the Center and be bright enough to contrast with existing stage lighting. “Khamsin had the throw distance, the output, the colour temperature and looked great in camera tests,” he reported. The GHIBLIs offered similar advantages over shorter throw distances.

The Khamsins and GHIBLIs purchased by BYU-I are shared among the three theatres.

Braden was also in the market to replace the Robert Juliat Cyrano followspots, which reside in the Center. Last year the university invested in Robert Juliat Dalis LED front-edge stage lighting; the one-metre units are used by the Center, Hart Auditorium and Snow Drama Theater.

“The Cyranos were great but slightly underpowered for the cameras so we made the jump to the higher output of the Lancelots,” Braden said.

The 4,000W arc sources ‘ticked all the boxes’ for Howard with their high output, super-narrow 2-5º zoom range and electric power supply for best on-camera performance, said Peter. “The trend we’re seeing is higher overall brightness on stage. So having a fixture than can cut through all the ambient light and direct the focus of the audience is important.” The four new Lancelots are dedicated to the Center.

The complement of fixtures recently arrived at BYU-I so they have been deployed only on new student orientation in the Center and on a new student talent concert in the Hart. But opportunities to use the new lights will soon multiply. In October the Hart will host performances by Ballet Jorgen Canada and the dance-painting fusion show, ‘Artrageous.’ Rounding out the year will be the annual Christmas concert, featuring 300 student musicians and guest artists, including former Metropolitan Opera star Frederica

von Stade and the Sonos handbell ensemble. BYU-I’s theater department has not yet announced its schedule, but there are three productions per semester for a total of nine shows a year.

“We appreciate the support that we got from ACT Lighting, Regional Sales Manager Aaron Hubbard and the ACT technical team,” said Peter. “We always feel comfortable knowing that our customers will be well supported by ACT.”

“ACT had been there for us with our previous Robert Juliat purchase,” Braden noted. “ACT also represents MA Lighting, and we use a grandMA2 full-size and light for our concert lighting control.”

He added that ACT will help BYU-I’s technicians learn to service the new fixtures. “We’re in a pretty remote location so we often rely on manufacturer training to help ourselves,” said Braden.