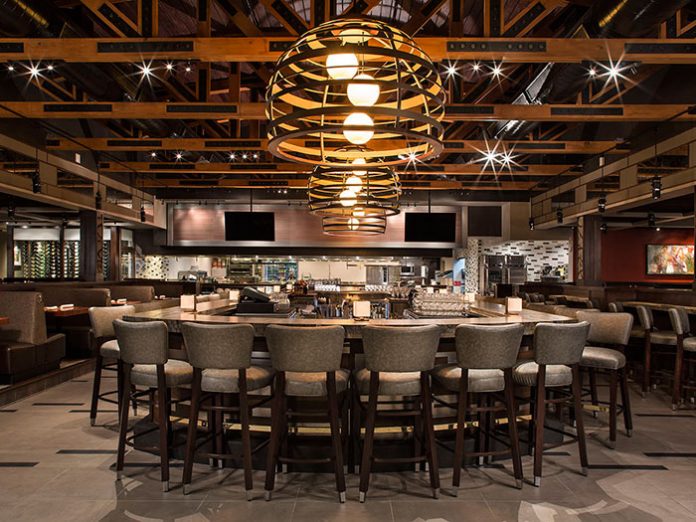 The successful Nashville-based casual-dining chain’s location in Columbus, OH, has a seamless background music experience that offers lush Bose sound – immersive but not overpowering; a similar approach will also be rolled out at forthcoming locations.

The system comprises of a combination of Bose Panaray MA12 modular line array loudspeakers, offering outstanding vocal intelligibility in acoustically demanding spaces, coupled with the Bose ControlSpace processor and a PowerMatch PM8500 amplifier, are providing a seamless background music environment for diners – one that never interferes with conversation but provides an even, consistent volume level throughout the entire establishment.

“I don’t know how they do it, but they do it, and that’s why we used Bose,” said Steven Durr, Principal at Steven Durr Designs, a Nashville-based acoustical design consultancy. “J. Alexander’s wants music now to be part of the dining experience, not just background anymore. We set up the MA12 speakers in here and turned on Frank Sinatra, which is the kind of music they like to play in the restaurants, and it was unbelievable. You could put your head next to the speaker and it was smooth and easy to listen to, and if you walked across the room the volume stayed more or less at the same level. It really is incredible.”

The MA12 loudspeakers were installed inside existing architectural columns in the bar area of the new restaurant, covered with diaphanous mesh, making them invisible for all but their lush sound. “The MA12 coverage pattern has almost no vertical dispersion… you know exactly where the coverage area will be,” explained DeWayne Rains, Vice President of Operations at AEI. “We installed them with the bottom of the columnar arrays about one foot above the level of seated diners, and the way they’re designed, when you’re sitting near one of the speakers, you’re actually hearing the one on the opposite side of the room. The volume does not change as you move from one side of the room to the other. It’s pretty amazing.”

Steven adds that they then time-adjusted Bose FreeSpace DS 100F ceiling-mounted speakers in the dining areas around the bar for added coverage as patrons move between the bar and dining areas. He remarked: “We also spent a lot of time exactly matching the equalisation of the speakers in each area, and the result is that the music never varies in volume or tonality. It’s as though you’re walking through a thin wall of music at all times. You’re immersed in music but you’re never fighting it to have a conversation.”

This Bose-based approach to creating an immersive music environment is likely to be applied to new J. Alexander’s locations going forward and will eventually be applied retroactively to existing locations, and possibly to some of the company’s other dining brands.

“It’s among the best audio experiences you’ll ever have,” said DeWayne. “Not just in a restaurant, but just about anywhere.”