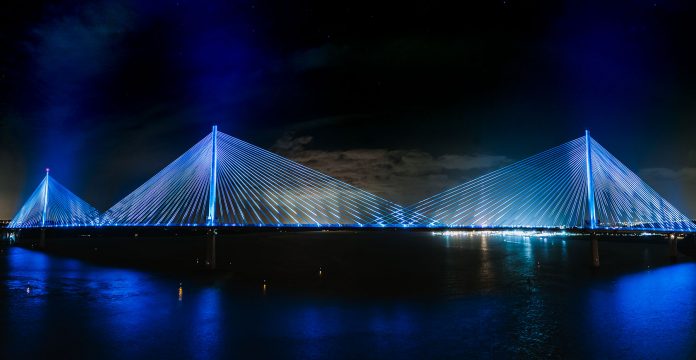 Scotland bristled with pride as the magnificent Queensferry Crossing – the  world’s longest triple towered cable stay bridge – was illuminated in all its 2.7 kilometre long and 207 metres high glory – by 60 x Robe BMFL Wash Beams, switched on by First Minister of Scotland, Nicola Sturgeon.

The lighting scheme to achieve the spectacular reveal for the official hand-over ceremony signalling the completion of the £1.35 billion project was designed by event production company JMP Productions, specified and supplied by Edinburgh rental and production specialists Black Light. Their project manager Thomas Ramage worked closely with Jon Pugh from JMP and contacts from Speakeasy and Transport Scotland.

The lighting was part of a mixed-media display which also included projection to reveal Transport Scotland’s impressive master-stroke of engineering and architecture that carries traffic using the M90 highway over the River Forth.

Black Light has the largest rental stock of Robe moving lights in Scotland and has invested steadily in the brand in recent years. When asked to light the Crossing, it was a no brainer in terms of which light to choose!

“Given the throw distance, we needed the sheer power, intensity and punch of the BMFL” explained Thomas, “coupled with the precision focussing potential of the Wash Beam shutters so we could concentrate light exactly where it was needed with minimal spillage”. This detail was doubly important as lighting and projection worked closely together to maximise the combined visual effect.

They also benefited from the excellent colour mixing to give a wide range of bold and confident colour variations, and some of the other finessing characteristics of the BMFL.

The 60 x BMFL WashBeams were positioned equidistantly along the central reservation of the Queensferry Crossing. From here they were able to shoot upwards and catch the towers and the intricate geometry of the cable stays making up this beautiful and elegant piece of creative engineering.

A sequence of effects were programmed for the reveal moment – ranging from beams blasting over to the Forth Road bridge and original Forth (railway) Bridge – which also traverse the water – to washes and texturing on the Queensferry Crossing cable work. Projections (from positions on the Forth Road Bridge and the shore at Queensferry) were beamed onto the northern most of the three commanding 679 ft. high towers and underdeck supports which included text and abstract images.

The system was programmed by John Rogers and controlled from a pair of Avolites Quartz consoles run via Titan Net and a dual redundancy fibre network utilising Luminex network switches which was installed for the hand-over event. For the build and the one evening programming session, this was located on the Forth Road Bridge running via a wireless link. From this position the team could clearly see the full effect of the lighting across the Queensferry Crossing.

However … to keep the light-up a total surprise from inquisitive members of the press and public … the BMFLs had to be programmed in batches of 10 on that programming night! This ensured that the effect of the whole bridge illuminated was not revealed until the event … all adding extra pressure – and anticipation – for Thomas and the Black Light crew.

For the show itself, lighting control moved into the centre of all the fixtures on the Queensferry Crossing where they ran Capture visualisations of the show as it was impossible to physically see the effect of the lighting across the bridge from there!

Other challenges included working on the site which was running under full CDM rules and regulations as it was a construction zone, which entailed a lot of co-ordination and logistics in terms of access and moving kit and crew on and off site. The Black Light and other technical crews involved in the show all had to undergo all the rigorous health & safety inductions necessary to be working there while FCBC (Forth Crossing Bridge Constructors) completed final works before opening.

Also the timescale, between getting the initial inquiry and the go ahead, which was tight, but everyone rose to the historic occasion.

“We were all extremely proud to be working on such a high profile event,” stated Thomas adding that it was a real privilege to be able to add their own little touch of magic to the state-of-the-art Queensferry Crossing, one of the most significant civil engineering projects to date in Scottish history.

Following the hand-over, the next day the bridge was opened to road traffic, and a few days later on 4th September, HM The Queen officially declared the Queensferry Crossing ‘open’ by cutting a ribbon on the south side.

The weekend preceding the official opening, around 50,000 members of the public – given tickets after a ballot – had a once-in-a-lifetime chance to walk the bridge which has no pedestrian access.