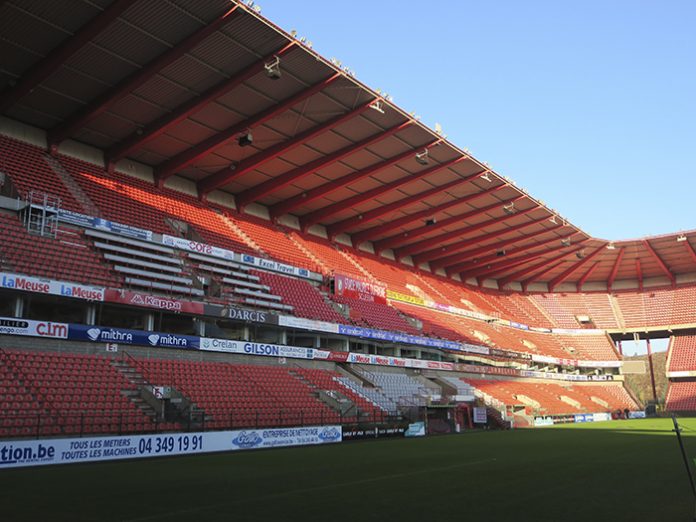 One of Belgium’s most successful football clubs, Royal Standard de Liège, is now playing to the sound of a new all-NEXO PA system, installed by leading audio company Arto.

Stade de Sclessin (officially called Stade Maurice Dufrasne) is home to Standard Liège, a team that has won the Belgian league on ten occasions and which has been in the top flight without interruption since 1921, longer than any other Belgian side.

The stadium has a rich history, having opened in 1909 when it was just a pitch and players had to change in a nearby pub.  Today it has capacity for just over 30,000 spectators, and has hosted matches in the Euro championship tournament.

Brussels-based audio-visual installers Arto has completed a major system upgrade at the stadium, choosing GEO S12-ST line array modules, the specialist high-output loudspeakers which NEXO has developed specially for stadium and arena use.  Ideally suited for the long-throw requirements of roof-mounted stadium installation, these systems have also been chosen for another leading Belgian football club, FC Anderlecht in the Stade d’Anderlecht.

In Liège, Arto’s engineers have used 93 GEO S12-ST cabinets for the stadium stands, flying them in clusters of four together with a RS18 sub in specially-built cradles. Additional RS18s are mounted individually in the roof; a total of 13x RS18-PIs have been used. The main system is powered by 16 NXAMP4x4 powered TDControllers, which support the Dante network protocol.

The GEO S12-ST features a tight dispersion pattern, keeping as much noise as possible inside the stadium. The system also produces enhanced speech intelligibility; up to 20 metres from the GEO S12-ST clusters to the lowest seats, and 15 metres to the rear seats in the stands.  System design by the Arto team was completed using NEXO’s NS-1 proprietary modelling software.

For the VIP tribunes, Arto has chosen NEXO’s newest loudspeaker product, the super-compact ID24 Series.  16 of these have been installed, powered by new NX.DT104 amplifiers.