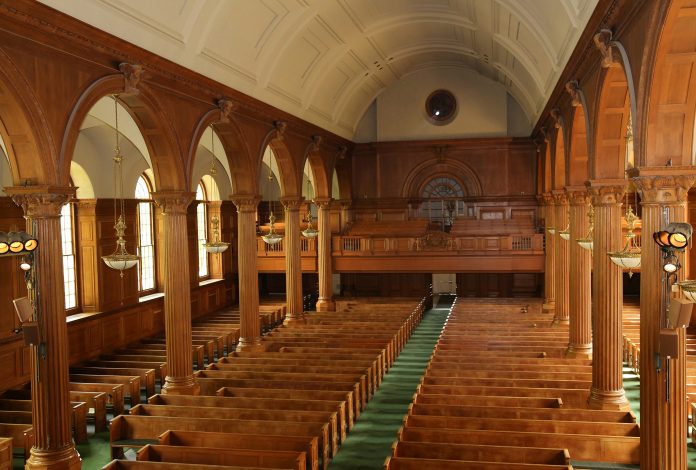 In addition to two lines of large pillars that run the length of the building and obstruct the passage of sound, the Chapel walls have 10 ft. high wood paneling running around the space along with the wooden pillars and pews, all of which contribute to reflectivity that can further impact audio reproduction. Fortunately, Martin Audio CDD12 speakers would help in providing a one of a kind solution to overcome these challenges.

Phillips Academy, a private boarding school founded in 1778 with a list of prominent alumni that includes former presidents George H. W. Bush and George W. Bush, originally dedicated the Cochran Chapel in 1932. The historic space underwent an extensive renovation in 1998 to expand the balcony and seating and add projection screens, but the audio coverage still fell short.

Discussing the recent audio upgrade, Mark points out, “The system had to provide superior audio for the wide variety of events held in the chapel, including school functions, weekly worship services for different faiths, weddings, concerts and recitals by high profile artists such as Yo-Yo Ma and Bobby McFerrin along with guest speakers like Spike Lee and Jane Goodall.

“Of course, the biggest challenge was overcoming the problems posed by the two lines of pillars which are such a huge obstruction the school had to install the large projection screens to the left and right of the altar so people in the side aisles can see what’s going on in the centre.

“That, plus the reflectivity caused by all the wood in the space further impacted the original sound system — large arrays installed on pillars toward the front of the space. The system fired right into the other pillars, causing a dead zone behind every pillar, and didn’t provide adequate coverage for the expanded seating area in the centre balcony.”

Mark had to design a new system that would expand the coverage so everyone in the chapel could hear the message; it also had to be virtually invisible to preserve the aesthetic integrity of the historic space and complement the projection screens that can appear and disappear at the touch of a button.

As he points out, “Usually, if you can’t see a speaker, you probably won’t be able to hear it either. It should line up with the listener at some point. After trying several different approaches, I realised the best way to go was something that had been tried before; installing the speakers high above the seating area inside the wooden archways at the top of the pillars. But that approach hadn’t worked ultimately because the speakers weren’t up to the task.

“Fortunately, Martin Audio had come out with the CDD12, the only speaker that could succeed in that particular application because the horizontal dispersion is wider close in the nearfield, and gets narrower as you move away from it. In addition to the unique dispersion pattern, the fact that it’s coaxial gave us a relatively small point source that fit the coverage we needed, which we couldn’t have done with a conventional 12” two-way speaker.”

To provide the coverage needed to the people behind the pillars, Mark divided the chapel into 12 specific zones, six on the left, six on the right, with a speaker dedicated to each zone. Each of the 12 zones has a CDD12 driven by one channel of a Martin Audio MA2.8Q amplifier with its own processing channel from the DX0.5 Loudspeaker Management System. Three of the amps drive all the speakers and each speaker is flown at about 32° up from horizontal and mounted with custom brackets.

In addition to the CDD12’s, two CDD8’s serve as outfill for the faculty seating at left and right of stage and two others are angled inwards as onstage monitors for the performers and speakers. Martin Audio C4.8T ceiling speakers are used for under-balcony coverage. The audio system also included the school’s repurposed Yamaha 01V digital mixers along with Shure, Countryman Associates, Audix and Audio-Technica microphones.

As Mark sums up, “The faculty and AV staff at Phillips Academy are really pleased with the upgrade. They put the system to an initial test at an all school meeting. Their staff felt the system sounded spectacular with exceptional clarity throughout the space, and smooth, even coverage in what was a packed house. And everyone appreciates the fact that the chapel has not been visually impacted by the speaker system. It still looks the way it did when it was first built because the technology is virtually invisible.

“The best sign of approval came when the Head of School looked over and gave us a thumbs-up almost immediately after starting his speech, which definitely showed that we had succeeded.”