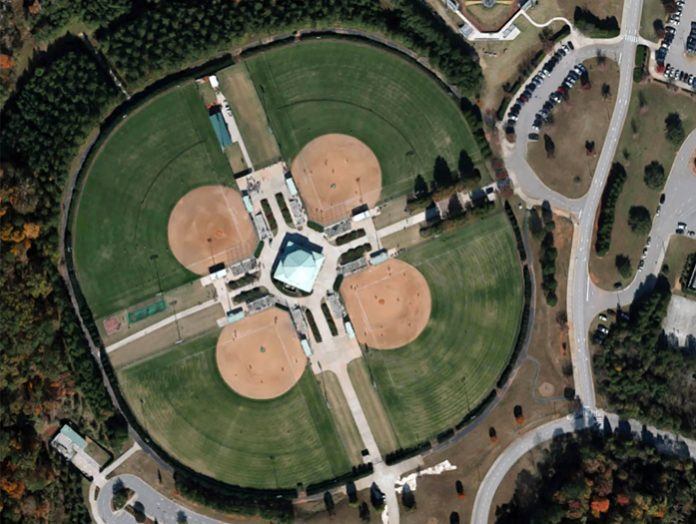 The Middle Creek Athletic Complex in Cary, North Carolina features four flexible 310-foot baseball/softball fields. The home plates of the four fields meet to give a four-leaf clover effect when seen from above. Poor coverage from the softball field’s original sound system combined with equipment failures inspired the town to repair the system with four Danley OS-90 weatherised loudspeakers, one for each diamond. Three other very successful Danley installations in Cary inspired the town officials to approve the repair “sound unheard,” based solely on Danley’s reputation and model output.

“The system originally consisted of conventional 70-Volt mixer-amps in the central scoring tower, with distributed speakers on the lighting poles around each of the four fields,” explained Cailen Waddell, technical director for the Cary Arts Center and the person responsible for the Danley design and installation.

“Poor initial product choice, multiple lightning strikes, and loudspeaker placement that covered spectators but not players combined to necessitate the repair. Investigation into repair of the existing equipment revealed that the underground conduits were crushed during initial construction, compromising the integrity of existing wire and making it impossible to run fresh wire. Due to the expense of replacing conduits and the coverage issues with the existing speaker deployment, we considered a new approach that would allow us to abandon the existing speakers and conduit.  The town placed an emphasis on repairing the system on a tight budget.”

The town of Cary already had a history of successful Danley installations. The Cary Theatre and the Cary Arts Centre Theatre both have permanent Danley systems, and the town’s mobile events system also consists of Danley boxes. “Based on past performance, we selected the Danley OS-90 without auditioning it, based solely on the modelling from the Danley Direct software,” said Waddell. “Our staff has a lot of experience installing and maintaining equipment, so for smaller projects like this, we keep the install work in house.”

The four Danley OS-90s are mounted on a central tower, one on each face such that its pattern falls over a given field and its spectator seating while staying off adjacent fields. Danley’s uniquely tight pattern control makes the design possible; conventional loudspeakers would produce too much bleed, effectively cross-contaminating fields with each other’s announcements.

“The weatherised Danley OS-90s more than met our expectations,” said Waddell. “They provide clear, intelligible music and announcements even in windy conditions.” Scott Carneval, president of Avant Systems Integration, added: “The Danley OS-90 pattern control is so good that all four systems can be going at the same time without compromising intelligibility!”