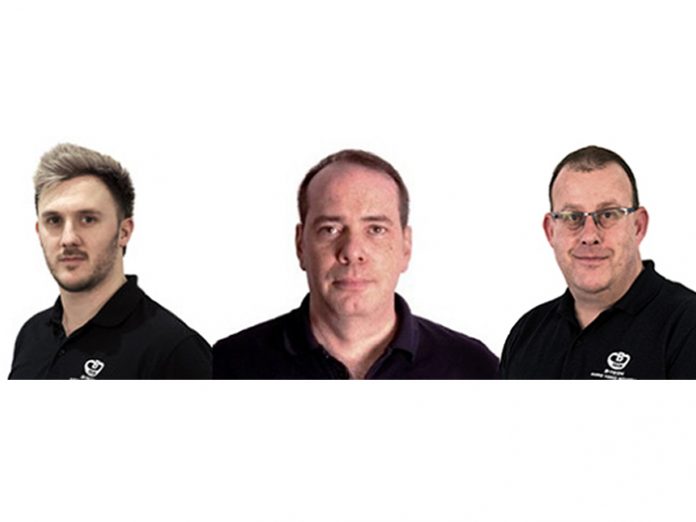 Award-winning manufacturer B-Tech AV Mounts has added to its recent senior management team with a series of key internal promotions to board level.

Nick Spencer, who has led B-Tech’s marketing team for the past 10 years, has been promoted to Director of Marketing and Communications with immediate effect, with former International Sales managers Jon Alway and Paul Haggarty also receiving Director level promotions for their respective regions. Paul will now take up the role of Director of Operations (Iberia and LATAM) whilst Jon is B-Tech’s new Director of Operations (EMEA).

The appointments reinforce B-Tech’s growing global presence and continued expansion. On announcing the news, Matt Bennett, CEO of B-Tech International, said: “Over the past few years, B-Tech’s brand has gone from strength to strength, which culminated in many ways with B-Tech winning the prestigious Manufacturer of the Year award at the AV Awards in September 2017.

“This brand-building has been evident on many platforms – from the website and social media, PR, digital mail shots, catalogues, product spec sheets, trade shows, sponsorship of industry events around the world to the promotional giveaways – all of this gets the B-Tech AV Mounts brand out to the industry so that instead of people needing a bracket, they want a B-Tech bracket. Nick has led this brand building which really has been the catapult to get B-Tech onto the world. To reflect the importance of Nick’s role within the company and as we look to take things forward on a global scale, I have appointed Nick as Director of Marketing and Communications for the B-Tech International Group with immediate effect.”

With the additional promotions of Paul and Jon, B-Tech continues to align its international ambitions with a more robust and reactive management structure.

Matt continued: “These new roles reflect the restructuring that the Group has been undertaking. Jon’s new role has been created to tie in with our new operation, B-Tech International (Europe) b.v., which is our new European head office for the B-Tech Group. Jon will be responsible for the management of our European and MEA operations which will all be run out of our centre in Brussels, Belgium.

“In order to minimise any potential disruption with supply chains given the current political climate, we are migrating our remaining international operations from BTUK to Europe. This will include the distribution to our European and Middle East sister companies (Barcelona, Berlin and Dubai) as well as working alongside Tom Meylink, our Director of Sales for Europe, in managing the sales operations to our international client base – making it the lynchpin of our European operations.”

As an additional part of this restructuring, Paul will be focusing on the rapidly expanding operations from B-Tech Iberia as Director of Operations for Iberia and LATAM. B-Tech Iberia had tremendous growth in 2018 and this is looking to continue as we expand into the LATAM markets as well as furthering our efforts in Spain and Portugal.

Matt added: “Paul has already appointed Enrique Rebollar to be based out of Madrid to help in the sales management for Spain and is in the process of expanding our office and showroom facilities to meet current and forecast demands. With ISE coming to Barcelona in 2021, we are pleased to be able to show off our position and standing in the local markets.”

To complete B-Tech’s European team, in Germany, Christopher Barz has taken on the role of Operations Manager for B-Tech Deutschland. Back in the UK, Tom Kelland begins his new role as Stock Controller. Tommy has a wealth of experience with B-Tech and will be integral as B-Tech continues to improve operational systems.