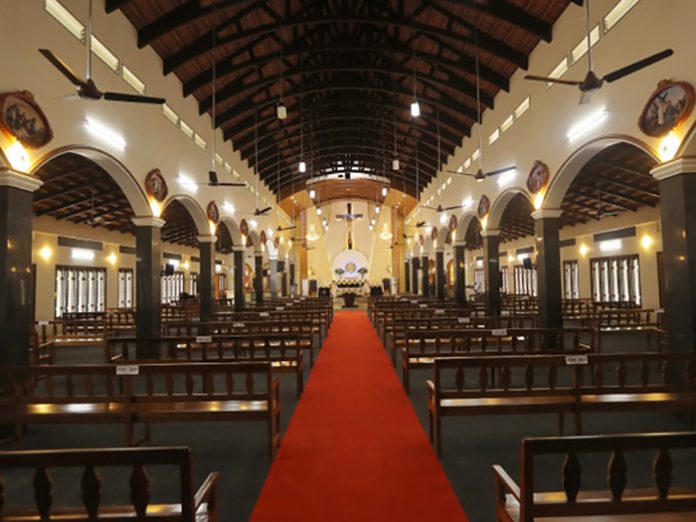 Sacred Heart Forane Church is a Syro-Malabar Catholic church situated in Thiruvambady, Kozhikode District, Kerala, India. Established in 1944, the church is one of the largest in its Diocese, with more than 1500 families and approximately 5,000 members. After almost 60 years, the church underwent renovation of its altar as well as the addition of a new sound system from QSC designed and implemented by Mathew George, founder and owner of systems integrator AVkraft. The system consists of a series of K12.2 active loudspeakers as well as CP8 and CP12 compact active loudspeakers.

Mathew, who has a background in sound engineering, is also the chief designer at AVkraft and enjoys working on sound in churches because of the creative freedom. He first became aware of the church’s sonic needs when the parish priest invited him to come and listen. “I came to the church to see a marriage ceremony and I could not hear well,” he recalls. “There were pillars and they created an obstruction. The old sound system was assembled with local speakers. Later, the parish priest and I spoke, and he asked me to change the system, giving me the freedom to choose a better solution.”

“Our original sound system was an aging speaker system that was no longer achieving desired sound quality,” noted Father Jose Oliakattil. “We have online masses every day, and there were a lot of problems. I invited Mathew to come and listen to the issues. We are very happy he selected QSC — the system sounds wonderful and is working perfectly.”

With 2,000 watts of clean Class-D power and 75 degrees of axisymmetric coverage, the K12.2 loudspeakers made for ideal mains. “I used the EASE acoustic simulation and analysis software and focused on the pews,” explained Mathew. “I could clearly tell that we’d get the best sound for the parishioners by simply placing two K12.2’s on the front two pillars focusing upon the center area.”

Given Sacred Heart’s many nooks and crannies, Mathew then brought in the CP series to serve as fills and monitors. “I used a total of six CP12 along the left and right of the side walls,” he said. “The CP series sounds great but is very affordable, which let me work within the budget the church set out. Again, I used the EASE software to position them optimally, and they are working great. For monitors for the keyboardist and choir, I used CP8s in an inverted position. Throughout, there is no feedback or howling and everything is equally audible everywhere in the room. The keyboard and choir now sound very clear.”

Mathew points out that he found the audio quality of QSC loudspeakers perfect for churchgoers: “The system sounds soothing. The sound is being appreciated by the younger and older generations alike. Kids aged 8 to 16 always like to sit in the front of the church to listen to the music and now older people do, too. I think that’s because even when you’re very close to the speaker, the sound is not irritating. We’re able to project clear sound everywhere without any speaker being too loud.”

“Every day we have choir, with a 10 member team as well as a guitar player, keyboardist, and singers – and all of them play live. On Sundays, there are 4 services attracting large gatherings,” says Father Oliakattil. “And now with our new QSC system, everything sounds wonderful.”

Now AVkraft is earning a reputation thanks to its new QSC system. “After the installation, there was a large service conducted by a visiting bishop,” said Mathew. “He is quite feeble and can hardly speak. At other functions here and elsewhere, people could never hear him clearly. I have placed one CP8 as a stage monitor for the priest podium. The 100 other priests who attended could now hear him very clearly, and were all asking me about the sound system.”

“After the other priests heard the bishop’s service, they started calling me the ‘QSC sound guy’, and now I have a reputation for being a sound expert among all the priests,” said Mathew. “I have since done four more installations with QSC in other churches.”

“Many people ask us where we got this system,” agreed Father Oliakattil. “There are 14 churches related to this one, and I’m always getting asked about how they can upgrade their sound. I recommend Mathew because he gives us such wonderful service. He regularly comes in to check on everything, without even being asked.”

“Money is not the focus in my business, especially for the churches. I have done many things for these customers that I don’t tell them about and do not charge them for – to give back”, said Mathew. “My passion is to do these projects to the best of my abilities, and these projects are like my babies. Having a customer trusting me with their project is like giving me their baby to take care of. And I always return to the sites to check and make sure everything is OK. With QSC, I know I’ll be able to reward my customers’ trust.”

Since 2015, AVkraft has been doing sound, systems integration, A/V installations and lighting consulting, with Mathew George personally doing all the design work. AVkraft is currently working on a large mosque project which could accommodate 20000 people and a large indoor stadium which seats up to 20,000 people.