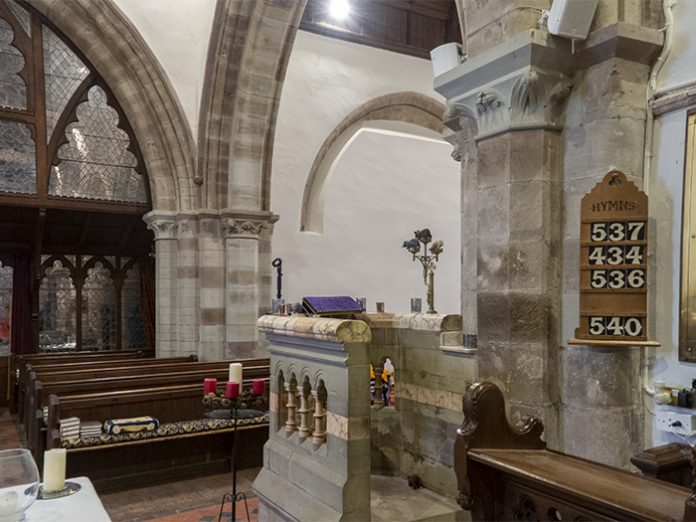 The Church of St. Nicholas in Grosmont, Monmouthshire, dates from the early 13th century, making it one of the oldest churches in Wales. The Grade II listed building’s large medieval nave is widely considered to be the finest in the country. During the late 19th century the church was on the verge of collapse, but was saved by architect JP Seddon in a Victorian renovation which separated the nave from the transept and choir, leaving the nave – which is now used for village events, farmers markets, concerts, private parties and the like – in predominantly untouched original condition, while the church space remains as a place of worship.

As part of a recent 15 year programme of modernisation, which included restoration of the roof and lime-plastering the transept walls, as well as new lighting, heating and toilet facilities, provision was made for a new sound system in order for congregations and participants to be able to hear voice and musical content more clearly.

With funding secured and permissions sought from church authorities, the technical team brought in commercial audio integrator Audiotek to assess the building’s acoustics and propose a solution that would provide good intelligibility and coverage of the church’s naturally reverberant environment. Selecting British manufacturer Martin Audio as a pioneer in the field of acoustics in reverberant spaces, Audiotek’s UK installations manager Chris Kmiec enlisted the help of Martin Audio’s Robin Dibble to specify speaker systems from the company’s O-Line and CDD series products.

“The brief was for two separate but linked sound systems for the church and the nave,” explained Chris. “So we opted for six Martin Audio CDD models together with a hearing loop to cover both the transept and the choir – where the primary focus was on clarity of speech – and a pair of O-Line micro line arrays to service the nave with an emphasis on musical quality. The innovative acoustic designs combined with Martin Audio’s powerful software optimisation software gave us the tools to tackle the reverberant challenges presented by the high ceiling and reflective walls, round Norman pillars, and flagstone floor.”

The CDD speakers easily met the key requirement of natural sound reinforcement throughout the awkwardly shaped church space without sounding obviously amplified. “The words of our newly-installed Bishop, Rt Revd Cherry Vann, were clearly audible in the blind corners of the transept and in the choir behind her, although she herself believed the system to be inoperative – mission convincingly achieved!” commented Revd Harter.

For the nave, the O-Line micro line array speakers succeeded in balancing warm, rich and musical sound quality against the building’s aesthetic constraints with their slim profile and colour matching. The O-Line design concept also maximises the amount of direct coverage into the audience space, reducing the level of reverberant energy in the room and substantially increasing intelligibility. “A Christmas enactment of ‘Nativity Live’ was the first to benefit from the new O-Line system, which delivered warm, rich sound to 175 people throughout the nave,” said Revd Harter.

Both speaker systems are powered by Martin Audio VIA two-channel Class D amplifiers located in the vestry, and processed by a Martin Audio DX0.5 signal processor which provides system equalisation and speaker optimisation.

“What really made O-Line work in this environment was Martin Audio’s speaker optimisation,” said Chris. “It’s so effective and easy to use, and the DISPLAY software enabled us to deliver focused sound energy precisely where it was needed and keep away from reflective surfaces and ceilings — in effect dialling out the detrimental influence of the space.”

The new sound systems have been universally welcomed, according to Revd Harter. “So well do the O-Line speakers in the nave hide in plain sight that many locals failed to observe that they were even there! It’s exciting to consider the potential for future social events and village life in this wonderful medieval space.

“Inevitably the need for a modern sound system in an historic church was questioned by some of the congregation but the vastly improved intelligibility literally speaks for itself, and the hearing loops are a huge success – there’s no more reliance on lip-reading for hearing aid wearers. One profoundly deaf visiting clergyman declared it to be ‘close to miraculous.’

“The challenges of bringing 21st century technology into a Grade II listed stone church building have of course been considerable – particularly with cabling, equipment siting, Bluetooth coverage and so on,” he concluded. “But I’m delighted to say that the Audiotek team went out of their way to deliver everything we asked of them, installing everything with minimal visible wiring and no structural impact on the building, and often working without accurate plans and in the chill of December – which they did with unfailing good humour and commitment. I would not hesitate to recommend Audiotek for future projects.”