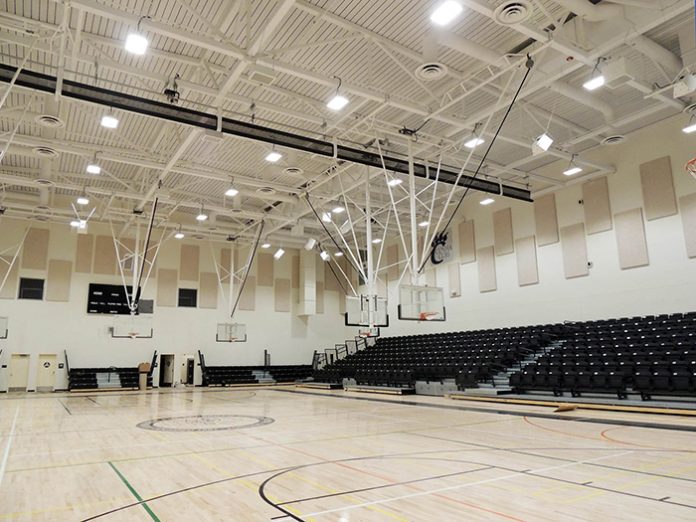 Half Moon Bay is an idyllic beach town just 45 minutes south of San Francisco, and its children attend schools administered by the Cabrillo Unified School District. Recently, the school district joined forces with the area Boys and Girls Club to fund construction of a state-of-the-art 18,000 square-foot gymnasium for use by both Cunha Intermediate School (sixth through eighth grade) and the community generally as a performance and meeting space. Local A/V engineering and integration firm Performance Media Industries (PMI) designed and installed the gym’s new highly-musical, highly-intelligible sound reinforcement system. By using Ashly Audio’s Pema 8250 DSP matrix processor/8-channel amplifier, two ne8250 amplifiers, an nXp1.54 4-channel amplifier, an FR-8 custom-configurable remote fader bank, and custom iPad user control software, along with Klipsch loudspeakers and subwoofers, PMI gave Half Moon Bay a high-fidelity system with rock-solid reliability for almost half of what it would have otherwise cost.

“This is a very large gymnasium (140 feet) with an Olympic-sized basketball court and retractable bleachers that can hold over 1,200 people,” explained Anthony Grimani, President and Lead Consultant at PMI. “The space also has retractable curtains that permit it to divide into two full-court games or four half-court games. But the funders had a lot more in mind than basketball games. They wanted the gymnasium to accommodate city hall meetings and other spoken-word events, along with dance performances, plays, and musical performances, like a jazz trio for example. So they certainly wanted it to be ‘multi-purpose’ but they didn’t want to compromise on those multiple purposes. When a jazz trio performs, they wanted it to sound really nice, not like jazz piped through a bull horn!”

Despite the high expectations, the budget was tight and space for rack equipment was limited – just a twenty-two RU in a small closet. As always, user control had to be intuitive. Anthony continued, “Enter Ashly Audio! In a cost-effective and compact form-factor, Ashly delivers pristine-sounding matrix processing and amplification, along with great user interfaces. And because Ashly combines so many features in a single box, we were able to minimise the number of boxes and thus minimise the number of possible failure modes. Despite its power, programming Ashly gear is easy – my 17-year old daughter can do it! And in twenty years of using Ashly gear, I’ve never had a dud. Everything just works reliably, as promised.”

At the heart of the system is an Ashly Pema 8250 combined eight-input Protea™ matrix processor and eight-channel, 250W per channel network amplifier. Two Ashly ne8250 multi-channel, network-enabled amplifiers deliver an additional sixteen channels at 250W per channel. An nXp 1.54 amplifier rounds out the package to power up the eight subwoofers with 1,500 watts per pair. Inputs to the system include a top-of-the-line Shure wireless microphone system with four separate microphones and receivers, a Denon multi-media player (e.g. CD, radio, various digital files), and a 1/8-inch jack for phones and the like.

The retractable bleachers extend out on all four sides of the court, necessitating coverage broken into six zones: northwest, north, northeast, southeast, south, and southwest. Each zone focuses on a particular area of the bleachers and allows each zone to operate autonomously when the curtains subdivide the room. Flown Klipsch KI-262 and KI-362 full-range loudspeakers join Klipsch KI-115 subwoofers at a height that’s safe from errant basketballs, but low enough to minimise energy spilled in the room relative to direct coverage of the bleachers. In all, there are forty-two loudspeakers and subwoofers, a fact that allows the system as a whole to put out considerable SPL without causing any single box to sweat.

A network of 48” x 96” x 2” sound absorber panels line the walls and the ceiling is made of a corrugated perforated metal scheme that conceals three-inch deep rock wool insulation. The acoustical package brings the reverberation time of the room down to about one second, for good voice intelligibility and musical clarity.

PMI gave the school two levels of user control. At its simplest, the installed Ashly FR-8 remote fader bank associates each fader with an input source, allowing users to adjust individual volumes in the most intuitive way possible. In addition, they gave the school Ashly’s customisable iPad Remote App, which allows them to control routing, level and source selection when the space is subdivided.

“It’s a really powerful, great-sounding system,” said Anthony. “And we were able to give them the system for forty- to fifty-percent less than most people would estimate it to be. It has a lot of features per dollar – and a lot of watts per dollar.”