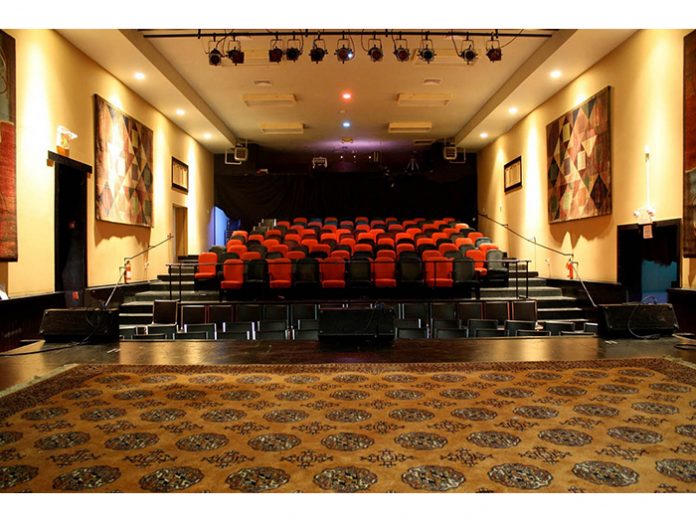 It opened in 1913 as an early movie house, enjoyed robust attendance until mid-century, fell into disrepair, and was restored to its former glory in the early 2000s. These days, Roy’s Hall can accommodate up to two hundred people and has made a name for itself as an intimate venue for local to national musicians, great regional theatre, and boutique cinema.

“In addition to the role the Roy’s Hall plays as a cultural focal point in the area, its other claim to fame is an appearance in the original Friday the 13th movie,” explained John John, who oversees multi-track recording at the venue and works freelance for Skylands Pro Audio. “We now have a tradition of playing the movie on every Friday the 13th, and the local crowd always goes into Rocky-Horror-esque cheering when Roy’s Hall appears in the film.”

Roy’s Hall is unusual because the stage depth is about equal to the length of the auditorium. John continued: “In my opinion, that balance between the front of the house and the stage is part of the secret of the phenomenal sound of Roy’s Hall. We have hosted some great musicians here: Steve Earle, Ralph Stanley, and Rickie Lee Jones, for example. Then there are some names that I expect will be noted in the future, like Delicate Steve, Milkweed, and Joe Cirotti. What I especially enjoy is watching bands and patrons entering the theatre the first time. It is room to enjoy, for bands and audiences.”

“One glitch can ruin a recording… or at least create a lot of work. Once you’ve lost an opportunity to record a great show, you don’t easily forget it. That said, we needed a way to hear exactly what we were recording because, until we brought in the Ashly digiMIX24, we could only hear the results after the event, when it’s too late to fix a problem. We already had a sending Audinate Dante Brooklyn II, but for a stellar recording, we wanted a receiving Audinate Dante Brooklyn II as well.

He continued: “I discovered that Ashly’s digiMIX24 could host a Dante hardware card, and the card was an Audinate Dante Brooklyn II. Ashly has been a solid, neutral-sounding hardware company for Skylands Pro Audio since even before the Ashly Protea series launched. So, the Ashly digiMIX24 was the perfect solution for Roy’s Hall.”

John obtains the multi-track signals directly from the pre-amplifiers of the room’s Allen & Heath iLive iDR48 via Dante. Before an event, he creates a local Dante network with CAT6 or CAT5e cables.