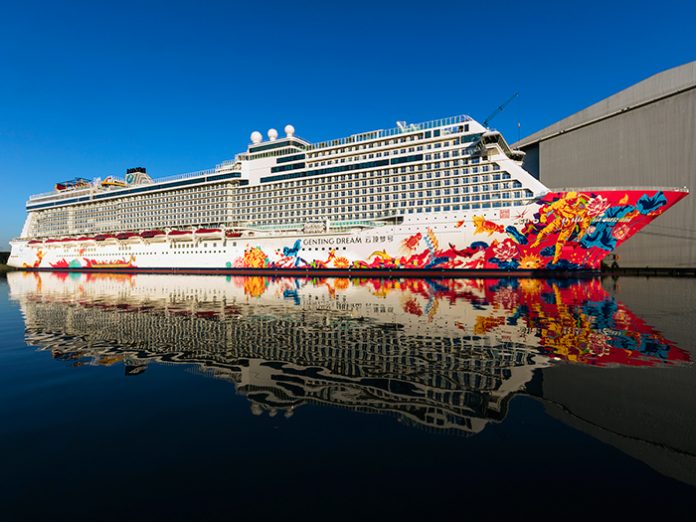 Meyer Werft shipyard delivered the Genting Dream cruise liner to the Dream Cruises shipping company in a ceremonial act. Commencing from November 2016 the ship that was specifically built for the Asian cruise market will be doing two-night trips at the weekend and five-night trips during the week departing from Guangzhou, and seven-night trips depart from Hong Kong and Sanya.

System integration specialist Amptown System Company from Hamburg, Germany, was responsible for the installation of media equipment in the numerous entertainment areas. The ship owners relied on ASC’s expertise in the field of audio, light projection, and control engineering and wanted to benefit from ASC’s know-how with regard to the implementation of broadcasting and transmission applications.

335 metres long, 39.7 metres wide, with a gross tonnage of 151,300; the Genting Dream can accommodate 3,360 passengers and a crew of 2,000. Of the total of 1,680 cabins a number of 1,278 are outside ones. The generous interior design of this type of cruise liner, the multitude of casinos and themed restaurants, the exquisite design of the cabins and varied on-board entertainment options are geared to the demands of a new generations of Asian customers who, while adhering to traditional values, are open to international influences as well. With all of these extraordinary features the ship qualifies for a positioning in the premium segment of the cruise liner market.

Sports entertainment includes exciting options such as diving down to a depth of 200 metre max; with two small submarines that accommodate four passengers each. More highlights with event character are available as for instance the Bar 360 in the heart of the ship, the Zodiak Theatre presenting shows and films, the Genting Rouge Entertainment Lounge, five karaoke rooms, the ‘Zouk at Sea’ event area with Indoor Club, Sport Bar with pool tables, an event a  bowling alley, and on the pool deck the ‘Zouk Beach’ pool party venue and the Waterslide Park with its water slides, climbing walls, and a high-rope parcours.

Owing to its long-time experience and with a history of system integration jobs on cruise liners like the Royal Caribbean International Quantum class and the Aida fleet successfully completed, Amptown System Company was entrusted with similar orders for the Genting Dream and her sister ship World Dream (to be delivered in the autumn of 2017) as well. On cruise liners like this; entertainment plays an important role as the guests come on board expecting to enjoy new experiences every day.

Working closely together with the Meyer Werft specialists during the design stage, ASC devised technical solutions for a translation of show ideas into practice with special regard to sound reinforcement aspects which are essential for instance in the theatre with its 1,000 seats, all the while drawing on its substantial expertise and on its comprehensive know-how of broadcasting applications including post and live production.

In cooperation with d&b audiotechnik, ASC developed, installed and commissioned a public address system as it were “from a single source”. While it had been common practice on comparable ships to use speakers and final stages from different manufacturers, powerful, high-quality d&b loudspeaker systems plus the corresponding d&b-produced final stages, all of these matching components of an integral system, were installed on the Genting Dream wherever audio results are supposed to meet particularly high standards. They provide for manifold audio editing options and facilitate signal distribution and processing throughout the entire system aboard the ship. The speakers were selected so as to fit into the overall architecture in the way designers had specified. Speaker systems and brackets installed in the outdoor areas are seawater-resistant. In the Zodiak theatre a premium class DiGiCo mixing console ensures a superior sound experience.

As for the professional show and effect lighting the majority of products used is by Martin Professional, profile spotlights are by ETC, and the lighting console in the Zodiak theatre is a M6 type. In the Bar 360, ASC installed a revolving LED floor 5 meters in diameter with a mobile LED ceiling above which consists of approximately 600 LED panels attached to the underside of a metal structure specifically manufactured by ASC. Opposite the Bar a large LED floor serves as a stage for dance shows which is programmable with content via a coolux media server system and can be moved while the show is going on.

The Zouk at Sea Club with a party deck outdoor area and the stern of the ship is equipped with a saltwater-resistant Daktronics LED-Wall suspended from a specially designed steel structure. Light strips mounted behind the video wall provide a natural light effect.

ASC gave proof of its knowledge and expertise in the field of broadcast technology on the Genting Dream as well. The broadcast centre with its final units ASC installed and integrated on board consists of a crossbar with 80 x 112 cross points to which the entire infrastructure, that is cameras, image editing units and play out systems, is connected. HD quality is ensured throughout.

An interactive communication system plus the comprehensive stage equipment aboard the ship are a guarantee that entertainment will be working in accordance with the latest technical standards.