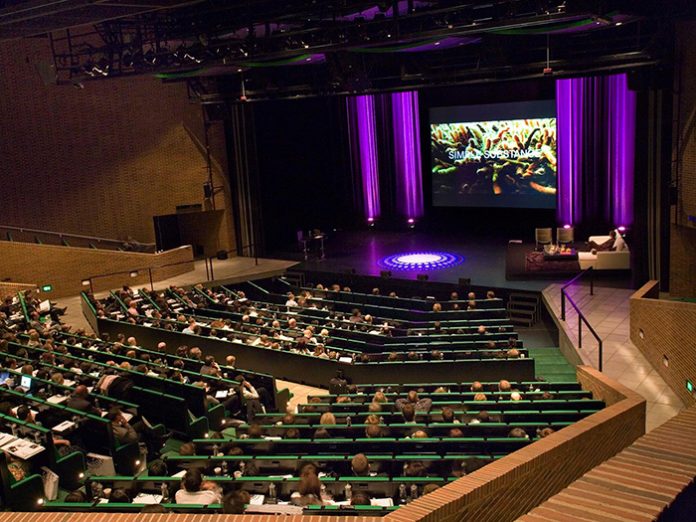 The MCH (Messe Center Herning) group is one of Scandinavia’s largest congress centres, based in the city of Herning, mid Jutland, Denmark, with large buildings and arenas for hosting conferences, sports events and rock concerts. The group has just installed a new d&b audiotechnik loudspeaker system into its theatre in Herning town centre, which will be used for both conferences and live music events.

The decision to select d&b was made by a team of in-house and external professionals after presentations and listening tests. MCH’s head of sound, Tommas Hviid Kristensen, commented, “We wanted a premium brand system that would be rider friendly for both in-house and visiting engineers, so we asked a number of companies to tender. Each company set up a mono hang of their system so that we could hear them in the theatre and then decide which we preferred.”

Lars Baun Frederiksen, Managing Director of d&b Distributor in Denmark, Alfa Audio A/S, explained how they were involved. “We had applied for the tender and had come along to the set up day. However, we quickly discovered when we were setting up that our sound card had broken, and due to the reasonably remote location of the theatre, it was a long drive for us to get a replacement, which meant we had very little time left in our set up slot. We literally flew the speakers, gave the system one or two quick tweaks, then just enabled ArrayProcessing – it sounded fantastic! Everyone at the theatre was impressed at how easy it was to make the system sound good, straight out of the box.”

The line array optimisation tool, ArrayProcessing, is somewhat special to d&b. “There are a number of presets that you can use,” explained Frederiksen. “For example, you could tell the system to leave out the balcony, or perhaps you don’t need the sound to reach all the back rows if they’re empty. No other manufacturer has anything like ArrayProcessing, as it is extremely powerful yet easy to use.”

The new loudspeaker system comprises mainly the d&b Y-Series and delivers complete flexibility for reproducing speech and music. Each of the two arrays feature four Y8 and four Y12 loudspeakers. “We wanted to use the Y-Series throughout the install,” continued Frederiksen. “There was a requirement for more powerful subs – not just in one place – to provide a little more flexibility when more power is required for larger concerts. So we decided to use the V-Series subs and had some extra ones added that we could put stage left and right if required.”

The flexible Y-Series is proving one of d&b’s most successful solutions for small to mid-size applications. The Y8 and Y12 loudspeakers share the same driver arrangement, with two 8” dipolar mounted drivers and a 1.4” HF driver combined with a central wave guide. Their advanced bass-reflex design delivers full bandwidth capabilities with an extended low frequency output. At the MCH Theatre the loudspeakers are driven by four D20 amplifiers for the Y8 and Y12s and a D80 amplifier for the subwoofers. Both four channel devices contain extensive Digital Signal Processing capabilities to provide comprehensive loudspeaker management and specific switchable filter functions, enabling the user to accurately target the system response, whatever the requirements.

Two d&b DS10 Audio network bridges were also installed at the MCH Theatre – one at the front of house position and one at the amplifiers. DS10 makes it possible to input AES3 signals into the Dante stream, and to convert from Dante back to AES3 going into the amplifiers. It’s also simple to connect external consoles to the system via a Dante interface.

The d&b ArrayCalc simulation software ensured optimum performance results for the theatre. “ArrayProcessing is calculated within the ArrayCalc software, which is regularly updated,” explained Frederiksen. “There are presets in the software that you can design, so the system can be optimised for speech or music, along with changing its level, level drop, areas to be excluded or adjusting reflections. The aim is to have the same optimum frequency response in all different areas of the hall.

You can also remote control the whole system in the software too, via R1 running on the computer at the front of house. It’s so easy – once a customer has seen it, they are able to use it by themselves. It means there are no mistakes, since you can’t move crossover points, so the speaker system will always sound as good as possible.”