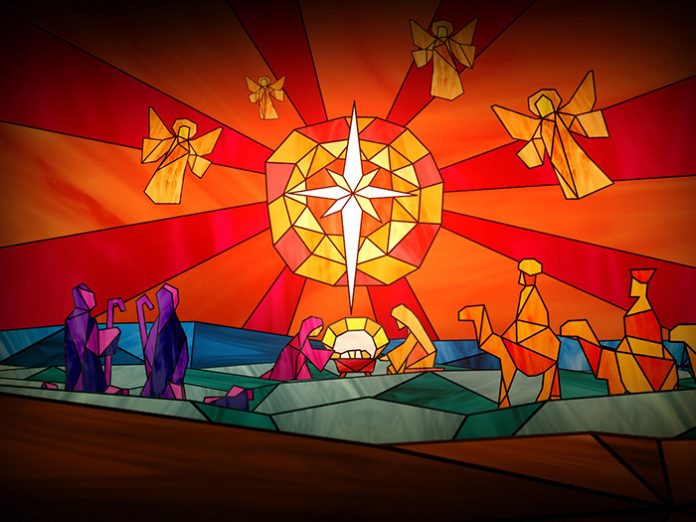 This Christmas season sees the interior of the church awash with imagery, produced by Jason Yang of Invisible Element, based on the Christmas story and depicted in colourful visuals reminiscent of stained glass. Advent is a season of anticipation and Ottley’s theme is to present a beautiful and welcoming environment as the congregation enters each week in the build-up to Christmas.

“Our aim was to create a short video clip as an opening sequence to the services over the five week period of Advent,” he said. “ We then break the video down into pieces. We use these individually as static images on each sidewall to change the appearance and mood of the room, and also transpose them in layers to build a more detailed picture, for example, adding the Wise Men or Angels to the scenic backdrop, which we can also run as a video sequence.

“We achieved this using MediaMaster to put each picture on its own surface and layer them on top of each other. We can choose on a week-by-week basis which picture we want as a welcoming image on each side of the room and, using the output function, I can output the same image to two different places. I can then replicate the output multiple times, having first removed the foreground detail and edge-blended the background imagery, and merge the repeats so they blend seamlessly into a backdrop that fills the space.” said Jason.

The ArKaos Stadium Server is controlled by a Jands Vista S3 lighting and media controller. “We put the still images on one channel and the video clip on the other and I can crossfade from one to the other directly from the lighting desk with MediaMaster running in the background over Art-Net.” continued Jason.

Ottley created the surfaces and masking for each area of projection in the room using MediaMaster’s video mapping function. “MediaMaster makes it easy to tinker with the idiosyncrasies of a building as a projection surface, and once I had the templates in place I simply use them as the basis for dropping in new images. It makes the whole thing very fast and easy to use and I can achieve stunning and very different effects in a very short time.

“Environmental projection is an exciting medium for a church as it transforms the environment and mood of the services from a passive experience to an engaging one that engulfs the congregation and draws them in.

“ArKaos makes environmental projection simple as well as spectacular. MediaMaster is an easy way to provide and control powerful images in an impactful way. It is super-versatile, looks good on entrance, engaging during performance and even takes care of some of the decoration of the room. It’s like painting on the surface of a building and I can’t think how I would do this without ArKaos. MediaMaster does it all for you, everything you need is built into the box, simple,” concluded Jason.