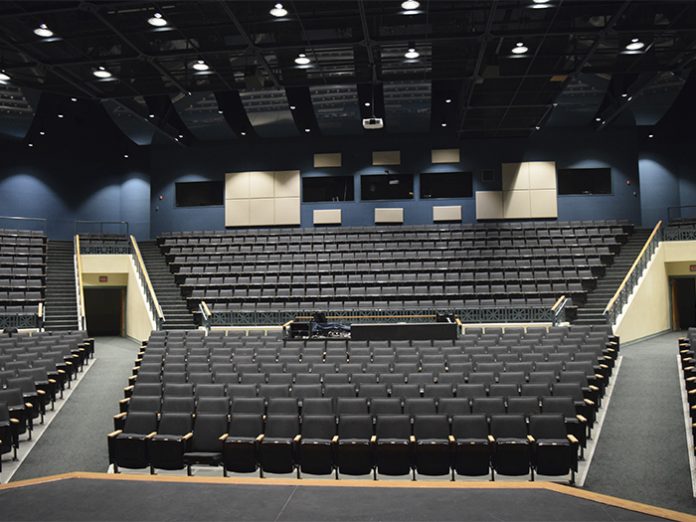 Located in Westfield, Indiana, the mission of Westfield High School is to provide rigorous and engaging experiences for all students with a Performing Arts program dedicated to creating a lifelong appreciation for the arts. With a busy annual event schedule which keeps their 868-seat auditorium in regular use, the antiquated house lighting design was often struggling to provide the illumination desired. Working with longtime partner Associated Controls + Design, the school decided it was time to renovate the aging house system for a brighter and more visually engaging environment using Altman Lighting Chalice LED downlights installed by Huston Electric.

“Westfield High School has been a longtime client of ours and we even sold them the first lighting control system when they originally built the auditorium,” began Mike Brubaker,
Associated Controls + Design. “We’ve been involved at the building for about 20 years now, but this transformation from halogen downlights to Chalice LED luminaires is probably the change with the biggest visual impact.”

As with many high schools across the nation, the auditorium is not only the main performance venue for the arts program, it is also serves as the primary gathering space for numerous events and meetings. Needing a house system that could keep pace with the schedule at hand, the antiquated system currently in place was falling behind with a heavy power consumption.

“I’ve been at Westfield High School since the Fall of 2017 and we put on approximately 15-20 productions each year, but we total about 170 annual events in all,” said Jon Majors, Auditorium Director, Westfield High School. “In the old house system, we had 93 fixtures and the lamps would need to be replaced every 12-18 months on average. Because of the physical layout of our auditorium, it was very difficult to replace about one-third of the fixtures as it required a specialized boom lift. It became such a challenge that those lights were often neglected which brought the overall room brightness down to a very poor level.”

“They’ve been working towards converting the entire lighting system to LED for a while now, so the house lighting upgrade had been in the plans,” continued Mike. “While the biggest push really came from the maintenance issues, an additional benefit would also be the energy-savings as they were also able to cut power consumption from the old 250W fixtures to the brighter Chalice 70W luminaires.”

Ready to put the renovation in motion, the search for the right technology began. Focused on the primary characteristics of an LED solution offering brightness with a long lifespan, Majors was also excited to see the visual impact the upgrade could have on the previously dimmed aesthetics of the room.

“Our auditorium has dark green carpet and cloth seats, so we wanted to install a lighting technology that could really help brighten up the color of the room, but also something that could be installed with no need for replacements over many years,” added Jon. “Associated Controls + Design let us demo a couple of different fixtures that would meet our needs and with the Altman solution were able to easily do a 1-1 fixture replacement of all of our house lights along with six stage wing work lights as well.”

The Chalice LED Series is the most diverse range of downlights available with mounting options that include pendant, recessed, aircraft cable, wall and yoke mount, plus dimming choices ranging from Mains Dimming to DMX. Additionally, with a wide variety of LED color or white light options, and numerous lens or reflector choices, the Chalice LED Series is the most versatile and easy to integrate downlight solution available today.

“We chose to offer the Chalice specifically for this project because they can do line-voltage Mains Dimming,” explained Mike. “In an install such as this, trying to do low-voltage wiring to all the fixtures would have made it very labor intensive. With the line-voltage Mains Dimmable Chalice, the electrical contractors were able to simply take the old fixture off its stem and then connect the Chalice. They didn’t have to get any higher than the fixture itself and they didn’t have to run any new wiring which provided a significant savings in labor cost.”

Taking into consideration the controls portion of the auditorium renovation, the technology of the Chalice luminaires was easily able to integrate into the new, more state-of-the-art controls interface. Without the need to change the dimming package behind the system, there was an immediate visual impact from the rejuvenated lighting design.

“An additional part of the project was to change-out the old wall controls, so now they can control the house fixtures either through the new wall stations or their theatrical DMX control console,” added Mike. “With the advantages of a Mains Dimming solution, we didn’t have to change any of the existing dimming system, and we were still able to provide them with an updated, modern front-end control system.”

“Upon installation, we realized that the intensity was phenomenal” admitted Jon. “The Chalice fixtures really brought our auditorium to light and it’s a complete night-to-day difference.”

With the design installation now complete, the new LED house lighting system at Westfield High School will provide a bright and vibrant environment for any production, event or meeting. In a performance venue where dependability will ultimately define the success of the project, Mike is confident in the design-quality of the Altman Lighting technology solution.

“The before-and-after is pretty amazing when you see the contrast between the two technologies,” concluded Mike. “Performance is a key attribute of the Chalice product line and we know Altman stands behind their products with fantastic support. When we put them in this type of environment, we can be certain that they will work beautifully and that’s what it’s really all about.”

“We always enjoy working with Mike Brubaker and the lighting experts at Associated Controls + Design,” said Nick Champion, Altman Lighting, Vice President of Sales and Marketing. “Having the wealth of knowledge that they bring to every project, it is always exciting to see how they will deploy our technologies in the field, and we are proud to offer our full support throughout the lifetime of the completed design.”