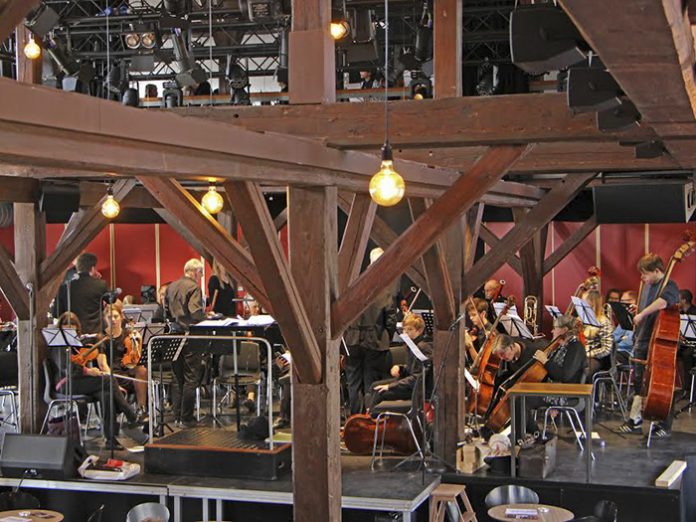 Frederiksen explained that the system was required to put some reverb back into the venue as it had recently been converted from a dedicated classical music venue into a live music venue for all genres. The acoustics were deliberately dampened to suit the purposes of rock club, which meant, of course, that the acoustics were no longer suited to classical music. Since the city council has no plans to build a new classical concert hall and there are no other venues suitable for classical music, a solution therefore had to be found.

“Several experts were called in and proposals from a number of suppliers were examined but, in the end, they chose ours,” said Frederiksen. “I’m sure it helped that we had already installed the PA for the rock club and we have a good relationship with the venue’s management team, but ultimately it was because our solution produced the best results.”

“We have used the very finest components available for every link of the chain, including EM Acoustics whose speakers are a key part of the system.” explained Frederiksen. “I have spent a long time researching and refining the system, and I am confident that the package we have created is of the highest possible quality. We decided to name it ‘Alfa Ecoustics’.

The idea came from Frederiksen’s work with the concert hall in Aarhus where the acoustic was a little too dry for classical music. “We experimented over several years with placing speakers around and above the audience and feeding the speakers with reverb signals picked up by the microphones above the orchestra,” he recalled. “We learned that to make it sound natural, we needed a fairly large number of loudspeakers and that they should all be decorrelated so that the sound appears to be all around you. Gain before feedback is always a challenge in these situations but we address it by choosing high quality equipment with minimum coloration. The EM Acoustics speakers are a perfect choice thanks to their high-quality components and completely natural, transparent sound.”

At the heart of the system are three tc electronics System 6000 reverb and signal processing platforms which receive the audio signal from several DPA 4015ES compact, wide cardioid microphones via a DAD AX32 AD/DA converter. The reverb signals are then delivered into 32 channels of d&b amplification and output through 30 EM Acoustics EMS-51 ultra-compact passive fill speakers and two i-8 subs. The speakers are distributed over and around the audience area, flown from the impressive wooden beams that form part of the structure of the original building, whilst the rest of the equipment (apart from the microphones) is in a rack locked away behind the stage. A panel at the side of the stage offers basic system control and preset selection.

“The system is delivered tuned with a number of fixed presets for different applications,” continued Frederiksen. “The user simply has to select the appropriate preset by the touch of a single button, and it’s good to go. I’m pleased to say that it’s been a huge success. The system creates a uniform, highly complex yet totally natural sounding reverb which sounds fantastic when played out through the EMS-51s. The musicians are thrilled with the results and pleased to be playing the venue again, and of course the audiences are delighted too.”