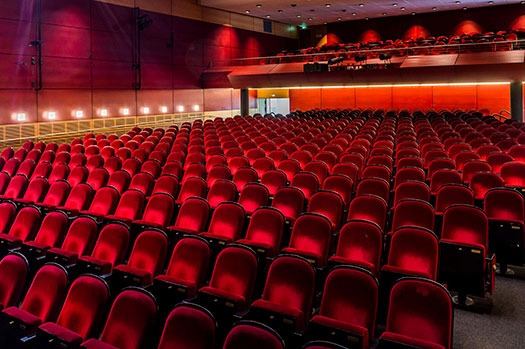 Literary text and historical materials are the trademark of the Altonaer Theatre, at home today in the centre of Altona after an eventful history. As part of a modernization of the premises, a new sound system was purchased. Alcons could convince with his proven LR7 pro-ribbon line-array across the board here.

The requirements for a new house system were – as usual in the theatre – quite complex. First, the entire auditorium should be provided with an even sound coverage, without requiring additional speakers and delay lines. Needless to say, speech, music and effects as part of a play must be transmitted very well. However, because the Altonaer Theatre also plays music theatre and musicals, additional emphasis had to be placed on an excellent intelligibility.

Given these specifications it soon became clear that only one line array could achieve the desired uniform sound quality. As a result, two systems have been set up and calibrated. Protones event technology from Lüneburg was responsible for the technical service of the project.

The Alcons LR7 line array – a strong performer, with an impressive track record in theatre applications. The Altonaer Theater decided ultimately for two flown arrays of 5 Alcons LR7 each. Under stage 2x BF302i were installed as low frequency support. Alcons ALC2 and ALC4 with DDP (Digital Drive Processor) were used for system drive and amplification.

The Alcons LR7 pro-ribbon line-array has proven itself in many theaters. Despite extremely compact dimensions of 359mm/14.1-inch width and 173mm/6.8-inch height and the lightweight (8Kg/17.6-lb), the system convinced with all the features that you would expect from an Alcons system: uncompressed, high-performance and uncoloured sound, with at the same time exceptional speech intelligibility, precise dispersion control and a high SPL.

“The sound and vocal intelligibility of the LR7 was immaculate and significantly better than that of the comparative system,” said Meyer-Delius. “In addition, the Alcons system has a uniform signal transmission in all frequency ranges, without the so-called “beauty dent” in the 1000 Hz range. This gives the engineer greater freedom in the sound scaping. ”

Dirk Dechring, Project Manager of Protones event technology, about the decision for the Alcons LR7: “It is a discrete system that provides a very high speech intelligibility. So the theater production is in the foreground, not the technology.”

Stage successes such as ‘Mephisto’, “Schiller’s complete works, slightly shortened” or bestsellers such as “Measuring the World” and “the hundred-year-old man who climbed out the window and disappeared” have achieved cult status. Successful authors and stage versions specifically created for the theater underline the quality of the house.