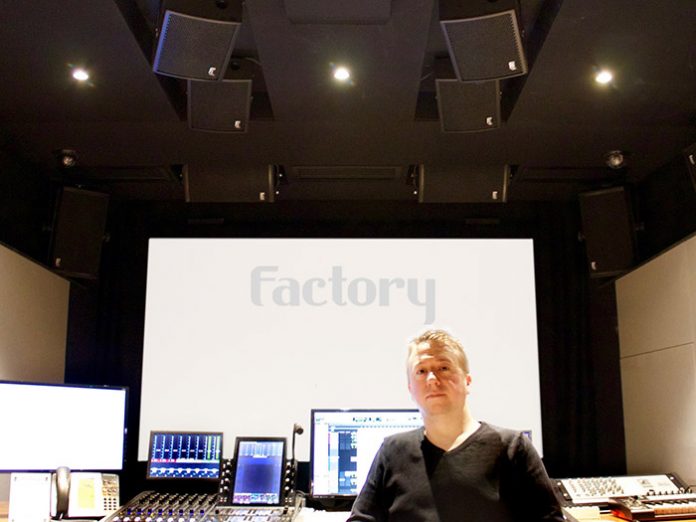 The list of clients that use London’s Factory Studios is a testimony to the quality of its sound design and mixing work. Last year Factory became the first UK facility to include a Dolby Atmos-licenced suite for commercials and trailers, which features 35 Alcons CRMS Cinema Reference Monitor System speakers.

Factory Sound Engineer, Ben Firth spoke more: “We aim to be at the forefront of developments in audio technology. We have a close relationship with Dolby and are always interested in new formats. We were introduced to Atmos at an early stage and – with an increasing volume of work – have been able to build two new sound studios, one with dedicated 9.1 surround and Atmos monitoring.”

Laurence Claydon, founder of technology consultancy Cinefilm, was brought in to work with White Mark acoustic consultants on the project.

For an Atmos array, it is critical to get the loudspeaker positioning very accurate and to ensure each one has enough power and dynamic range for each position. Traditional cinema drivers are generally built down to a price. With horn-loaded compression drivers, distortion rises with frequency above the break-up point at 3kHz. Alcons pro-ribbon loudspeakers do not suffer with break-up or increased distortion at higher frequencies so are clean beyond the upper limit of human hearing at 20kHz.

To prove the point, Laurence took Ben to Alcons facility in Zwaag, Netherlands, to do some listening tests.

Laurence stated that once Ben heard the Alcons CRMS loudspeakers it was a done decision. Cost was a consideration, but Alcons is the only company producing truly studio monitor quality from a post-production and cinema product. Every Alcons installation Laurence has done has received nothing but praise the tremendous sound quality.

Ben added how when building an Atmos room with so many speakers, there is only one chance to get it right. Ben continued that when he listened to a few configuration options, the one that immediately stood out was CRMS for the screen: “I’ve never been a fan of horn-driven speakers and so Alcons immediately ticked that box. Low distortion and flat response at all SPLs make the system really nice to listen to for prolonged periods. The richness and clarity of the CRMS are outstanding.”

For the surround system 20 CCS-3s, four VR8s and four CRS8s were chosen. The low end is handled by four ultra-slim CB181 subs, with ten Sentinel 3 amplifiers driving the system.

Another advantage of Alcons pro-ribbon technology is that it makes the loudspeakers considerably lighter than traditional designs.  Laurence stated that the main challenge was to design and install a full Atmos-licenced monitoring system into quite a small room at the top of a 5-storey building. Every millimetre counted and the lightweight of the Alcons speakers helped with both the transport and precise positioning.

Ben spoke more specifically about the build quality and how fantastic it is, with no negative effects on driver performance. As well as delivering a flat frequency response with crystal clear highs at all SPL levels, the bass response is also claimed by Ben to be impressive. It is imperative that all our mixes sound the best they can, not just in the mix room but in the cinema, TV, radio, and online.

Laurence concluded with the following: “It’s all about making sense of the detail and not losing it, which is what the pro-ribbon driver technology does so well. I believe there’s very little out there that can challenge Alcons. The Alcons CRMS speakers are ideal for critical mix work, but they have the same dispersion pattern as a cinema system. Mixes on them translate well to different playback systems, but they have an extra layer of quality and clarity.”