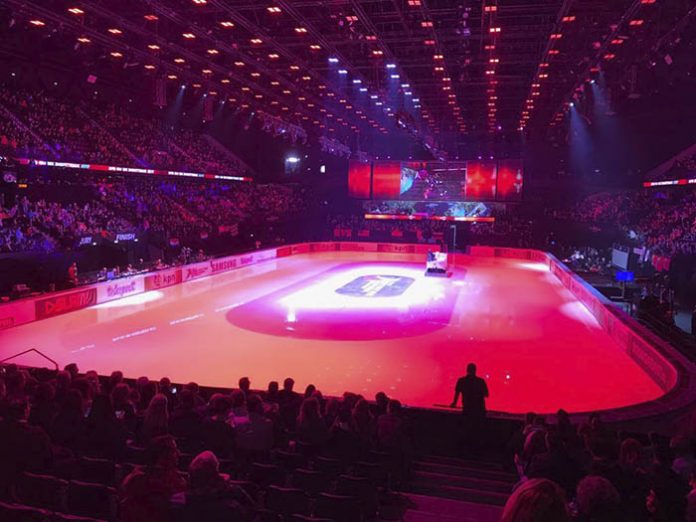 The Ahoy Temple was recently converted into an ice stadium with space for more than 8,000 visitors. After more than 20 years, The Netherlands could once again receive the ISU World Short Track. In addition to the top sporting performance the skaters provided on the track, visitors were treated to a total experience courtesy of audiovisual expert, Dionisys Show Systems in North Scharwoude (near Alkmaar).

A lot of light is required on the track due to the furious speed of the skaters and the high-speed cameras with long shutter speed. There is also a need for sufficient side light to accentuate the faces of the skaters. Additionally, the Ahoy light ceiling hangs over 16-metres above the ice rink during this event. If you want to combine this with a lighting fixture that also has to generate different colours for the shows between the matches, then the possibilities are very limited. The Studio Due Citycolor RGBW, which produces an extremely high output with a symmetrical square plane did meet this criteria though. LED technology enables blackouts and colour patterns to be performed immediately and sequentially, which is impossible with HQI’s. For this event, 176 of these LED luminaires were used, combined with 110 Martin by Harman MAC 2000 Wash and 120 Clay Paky Sharpy moving heads, along with 280 CM Lodestar motors to get everything in the air.

The sound plan was also ambitious, because it needs to focus on the audience and not on the skating ring. In the upper ring, L-Acoustic V-Dosc cabinets were used, for the lower rings and VIP stands were selected for DV-Dosc and Kara speakers, all controlled by LA-8 amplifiers. No separate subs were used as they would generate unnecessary resonance, which would cause dust to fall off the ceiling on the ice.

Video technology was also used in this production: an 18mm LED wall for the centre screen and 10mm for the two side screens, a total of 126 M2. The LED boarding through the hall was used for the tennis championship and was hired. About 50 plasma televisions were used to display images in crew rooms, changing rooms and VIP areas.

Around the ice skating track Prolyte Stagedecks were brought in to cover all the cooling lines carefully, which also allowed the officials to get very close to the job. The ice track itself was planted by Ice World, who worked closely together with the audiovisual production crew.

Dionisys Show Systems appealed to AED Nederland to hire a large part of the audiovisual material. Hugo emphasised that AED had strongly considered the choice of materials. The Studio Due RGBW Citycolors were tested first at AED Studios in Belgium, where the light intensity could be measured at a similar height to determine the correct number of luminaires. When it became clear that 176 devices were needed, AED purchased the extra fixtures from Studio Due in Italy. AED then delivered the flexible material solution to realise this exceptional event. The combination of top sports, spectacle and entertainment resulted in a spectacular live experience.