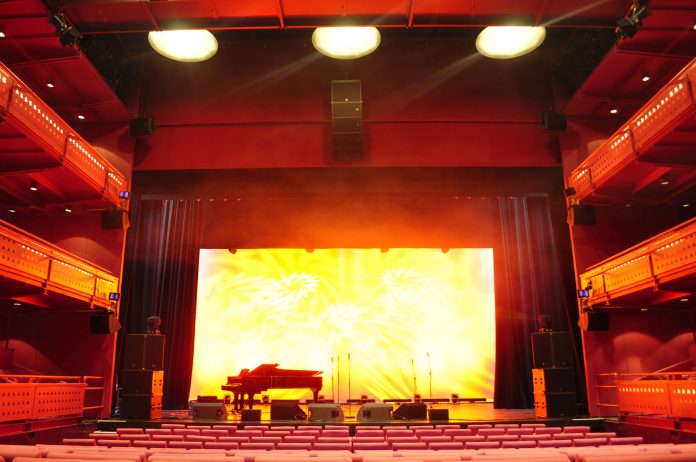 Roger Kirby, along with the in-house design and installations team at Liverpool, UK based Adlib have worked their magic again with a brand new L-Acoustics installation, in The Quays Theatre at The Lowry in Salford Quays.

The upgrade project was co-ordinated for the theatre by Dave Woodward, the Head of Technical Services. Due to budget restrictions, the new sound system design was required to utilise as much of the existing cabling infrastructure as possible.

For Adlib, the process started with detailed discussions with Woodward and the in house theatre technicians about the sonic requirements within the space. It was established that the new system needed to handle spoken word applications just as well as amplified music for gigs and concerts.

Following a detailed site survey and acoustic modelling along with detailed listening tests, the introduction of a distributed L-Acoustics solution was then proposed mainly for its coherence, rich-tone, and admirable power handling capabilities, explained Roger.

To fully optimise the system in the theatre, loudspeaker placement required some creativity and this is where Adlib’s knowledge of the L-Acoustics product range along with their broad experience installing sound solutions in a variety of busy performance venues is invaluable.

A total of six 12XTi full range boxes installed close to the proscenium line make up the core stereo system on all three levels, they work in conjunction with four 8XTs with the first pair of 8s deployed for coverage across the nearfield stalls seating and a second pair providing delayed sound coverage for the side-tier stalls seating towards the rear corners of the auditorium.

The L-Acoustics XTi Architectural-series loudspeakers use point-source technology which is perfect for situations like this where many listeners are located off the main system axis.

A centre-hang of L-Acoustics ARCS WIFO Loudspeakers has also been introduced in the centre of the proscenium arch. The ARCS Focus system is optimised for medium throw scenarios and works perfectly here. The hang compromises of a single SB18 sub at the top of the array with four ARCS Focus loudspeakers below.

This provides excellent coverage to approximately three quarters of the seated audience on both Tier one and tier two levels. The bottom two ARCS FOCUS loudspeakers are directed to provide smooth coverage to the centre and rear of the ground level stalls seating.

The loudspeakers are driven and controlled with a combination of LA8 and LA4 L-Acoustics proprietary amplifiers which have been installed in the main legacy sound & communications racks. LA-Network manager allows the operating sound engineers complete control and optimisation of each individual loudspeaker within the installed system.

Again, with reduced cost in mind for ongoing sub-hire costs for The Lowry, Adlib has also supplied a secondary portable amplifier rack allowing racks-and-stacks to be moved easily to other locations in The Lowry complex.

This allows the ARCS II/SB18m stacks and 12XTi/8XTi Series Loudspeakers to be operated outside of the Quays Theatre space as and when required.

Some of the house signal and loudspeaker circuits already in place were modified and optimised to facilitate the new loudspeaker system, this included the extension of some loudspeaker cable circuits and the relocation of others. The main signal patch-bay was also extended and modified to simplify signal connectivity from a variety of in-house mixing desks including Soundcraft and Yamaha consoles.

At Woodward’s request, Adlib engineers re-used as much of the original system infrastructure as was physically possible. This included redeploying a number of loudspeakers circuits that had previously seen limited use due to their original placement.

The timeframe for the installation was relatively tight – two weeks to get everything installed and commissioned – although by no means the most pressured that Adlib has encountered – the operation was carried out with the usual Adlib efficiency and there has been good feedback from the in house technicians who are impressed with the solution.

“We really enjoy working in impressive multi-purpose theatre spaces like The Quays. The natural acoustics of the theatre are fantastic and the resulting coverage and overall balance throughout the theatre is very impressive,” commented Roger Kirby.

When initially considering loudspeaker placement for the space there were a number of restrictions including the venue’s stage width and format combined with relatively low ceiling heights at all nearfield side seating positions. This could have potentially compromised the sound coverage by restricting the maximum sound pressure levels that could be achieved.

This problem was circumnavigated in two ways: A series of bespoke mechanical extension brackets were supplied and installed allowing greater distances to be maintained between the nearest seats to and the proscenium 12XTs on upper tiers.

Dave Woodward concluded: “Working closely with Adlib to achieve a flexible system that provides good coverage for everything, from amplified spoken word and theatre sound effects to full production music gigs within a tight budget has been both trouble free and very rewarding. The team and I are all very happy with the results and are receiving excellent reports on the system and sound quality now available in the space with house equipment from our venue clients and audiences.”