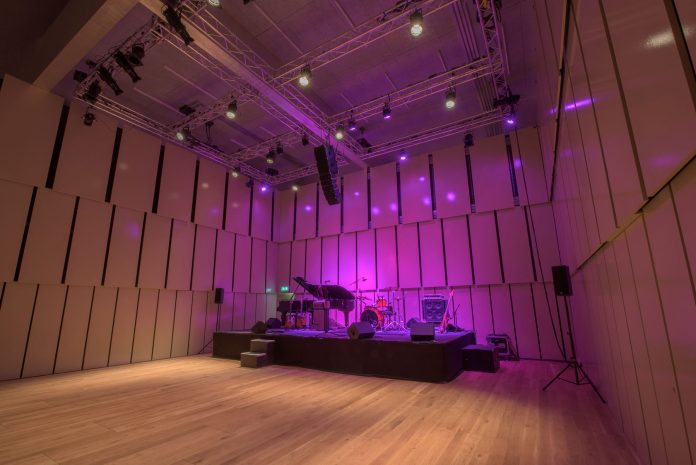 Adlib has supplied a Coda TiRAY sound system to Liverpool Philharmonic’s new venue, Music Room, a completely flexible space accommodating between 160 to 250 people depending on a cabaret, theatre or standing configuration. The venue, which opened in October 2015, has been built as part of the £14.5 million refurbishment of the 1939 Grade II*listed Liverpool Philharmonic Hall.

Liverpool Philharmonic is one of the UK’s most progressive music organisations, home of the Royal Liverpool Philharmonic Orchestra, presenting more than 250 concerts and events annually including classical rock, folk, roots, music, festivals, film and comedy at its popular city centre hub on Hope Street, and delivering over 3,000 music education sessions each year for communities throughout Liverpool.

Adlib has been involved with supplying equipment and technical expertise to the in-house Production Team at Liverpool Philharmonic for a number of years. Adlib won the tender to design and install a Coda ViRAY system for the 1,700 capacity main auditorium. For Music Room, Liverpool Philharmonic required a sonic solution that could be quickly and simply installed; that utilised existing infrastructure provided by capital development investment in the main auditorium and which included racks, patch bays, facility panels and trussing that could deal immediately with events.

Liverpool Philharmonic invited tenders, finally opting for the Coda system as the best solution for the range of concerts and events in Music Room.

Coda’s TiRAY, was chosen for quality, reliability and overall value and its ability to cover the entire Music Room evenly for sound when suspended from the new truss solutions.

Adlib supplied six ultra-compact Coda TiRAY loudspeakers and two Coda TiLOW bass extension elements. The loudspeakers may be rigged as a single centre hang or split as conventional left and right stereo hangs. Either flown configuration may be augmented with additional Coda G18 subs to suit. However for many of the ‘lighter’ performances, the low frequency capability of the flown system is very good.

Two Coda HOPS8I speakers – also discreet and optimised for smaller spaces and nearfield applications may be used as near-stage fills and can also be wall-mounted at each side of the room.

The amplifiers are Coda LINUS10-C and LINUS5-Cs all controlled via ‘Linus-Live’ software. These are pre-programmed with a series of parameters for different set ups which can be straightforwardly selected to suit each performance.

Liverpool Philharmonic’s in-house Production Team is delighted with the results of the system and the professional support and service from Adlib. In particular the team was impressed with the fast turnaround from design to commissioning the system for the first event and the service provided by Roger Kirby. The in-house team all agree that the components sound excellent, provide a very clear, clean sound around Music Room and their output is impressive compared to the expedient size of the boxes. The new system is also proving a hit with both artists and audience.

Gail Wroth, Liverpool Philharmonic’s Head of Production added, “The new system enables the in-house Production Team to meet the ever changing requirements of the users of Music Room as well as enabling its development for corporate use within our in-house production services, expertise and facilities.”

For Adlib, John Hughes summed up, “We are delighted that the installation of the Coda system in Liverpool Philharmonic Hall, both in the main auditorium and Music Room, has been so successful. We’re very proud to supply the venue, which is an iconic part of Liverpool’s rich and colourful musical life.”