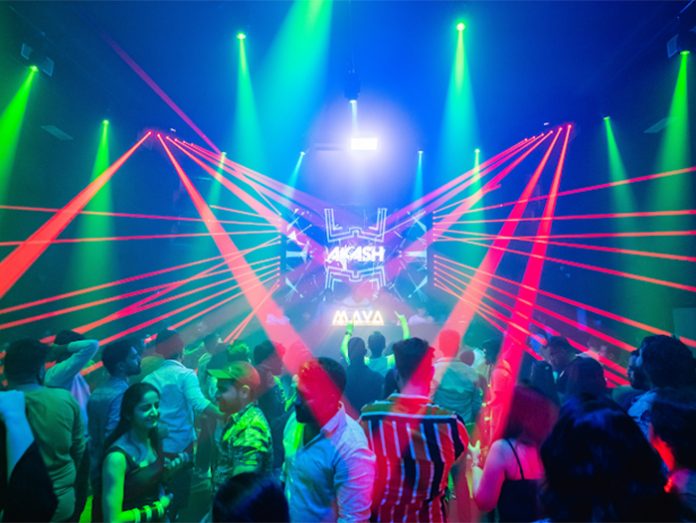 With the ambition to make MAYA India’s most definitively ‘world-class clubbing experience’; Vijay Ghattamaneni – owner of the property – left no stone unturned in transforming what was once an abandoned building in the heart of Tito’s Lane, into a nightlife haven that can hold its own when pitted against any premium nightclub in the world today.

From commissioning a comprehensive acoustic treatment for the entire venue, to ensuring that the entire technical solution was tailor- made to the space – Vijay did not shy away from going the extra mile to bring his vision for MAYA to reality. And after a fair bit of research, he was convinced to on-board Pune’s leading technical solutions specialist A2K Audo&Aux – entrusting them with the responsibility of seamlessly bringing together the entire technical infrastructure for the venue.

Akash Sethi, Founder of A2K Audo&Aux, recounted: “Mr Vijay Ghattamaneni got in touch with us via the Reference of Mr Sandeep Reddy who is the owner of Chronicles in Vagator, where we had provided high-quality rental services in the last season. Mr Ghattamaneni invited us to visit the site in its bare condition, and explained to us his vision for the kind of nightlife venue he wanted to establish. With venues like Titos, Mambos, The White Goa, Cocktail dreams, The Pink Elephant etc already dominating the Tito’s Lane strip – the brief for us was to ensure that MAYA had to be established as a venue that offered an experience unlike any other – from the lighting design to the LEDS and the sound and everything in between.”

Without wasting much time – Sethi and his team of experts immediately commissioned an extensive analysis of the space, which brought to light key issues that needed immediate attention. As Sethi commented: “The venue sports a high ceiling of approx 16 feet, and after reviewing a basic plot of the location of the dancefloor, seating, bar and DJ console etc, we spotted that two massive coulomb and a beam supporting the ceiling slab towards the end of the proposed dance floor section and the VIP section. When we ran a few tests to analyse the space, we found the RT time to be super high at 96. So before taking up the project, we knew it was imperative to commission a rather extensive acoustic treatment of the space, else even the best audio system wouldn’t sound upto the mark.”

After explaining this to Mr Ghattamaneni and securing his permission to proceed with the necessary acoustic treatment for the space; Sethi and his team at A2K Audo&Aux collaborated with Saint Gobain – global leaders in sustainable construction solutions – to formulate a comprehensive, high- quality and efficient remedy spanning a total of over 3500 sq.ft to correct the acoustics of the space.

Detailing the solution, Sethi said: “In terms of the acoustic treatment, the team of specialists from Saint Gobain worked closely with our team to run simulations that gave us an exact understanding of the kind of solution the space needed. Based on the results of the simulation, we decided to first deflect all the four side walls by 110.5 mm, using 50mm of 32 density polyfill of 1000GSm; followed by a 46mm air gap with Gyprock Sixto perforated gypsum plasterboard with original company salt-water resistant special hardware channels, screws, studs, acoustic sealant, along with floor and ceiling sealants.

The naked concrete ceiling is completely covered with a 24 density FR rated special cut diamond foam; and this comprehensive solution allowed us to ensure that the venue remains absolutely vibration-proof. The fact that we were able to achieve this mammoth task within an extremely tight time-frame of a few days is testimony to the dedication and determination of the combined efforts of team A2K Audo&Aux and team Saint Gobain – with a special vote of thanks to Saint Gobain’s West Zone Manager Mr Pankaj Patel for all his support in ensuring the entire logistics proceeded smoothly per plan”.

Following the detailed acoustical treatment, team A2K Audo&Aux quickly outfitted the venue with an extremely formidable sound, light and LED infrastructure that was tailor-made to exactly meet the requirements of the space.

The visual aura of MAYA as it stands today is thanks to an enchanting lighting, LED and SFX architecture put together by team A2K Audo&Aux, which comprises custom-made fixtures and products sourced from high-end OEM manufacturers.

2 plush LED walls of 3mm pitch from Quanli adorn the space, with each individual panel of the respective LED walls measuring 196mmx196mm seamlessly fitted onto an iron frame with magnetic feet. Not only does this arrangement affords a wall-deflection value of just 75mm thereby allowing for unparalleled viewing clarity, but it also provides for quick access to service the respective systems when needed. One LED wall system measuring 3m by 2m is outfitted at the main performance stage (DJ console), while the other measuring 4m by 1.5m is outfitted above the lavish bar section – with the entire LED infrastructure controlled through processing units from Novastar, and powered through distribution supplies from MeanWell.

Additionally, team A2K Audo&Aux expertly commissioned a minimalistic trussing infrastructure within the venue to house the impactful lighting fixtures responsible for creating a visually mesmerising ambience within the club. The venue is Loaded with 24 units of mini-20 watt LED Moving Heads spread across the venue to evenly fill the space with colour and pomp, while 8 units of 10R sharpies and 4 units of 1000 watts LED colour washes dish out the main high-energy club lighting design. Alongside this, the team have also installed 2m strips of Red Laser Battens (total of 4 units with 6 heads each) on either side of the LED Wall at the main performance stage to afford a swiping effect, while 2 units of the Laser Battens have been installed diagonally on to the truss on either side to cover the entire venue with a similar swiping effect.

The visual extravaganza is further enhanced with a flurry of high-performance custom designed SFX gear, as a total of 6 units of CO2 jets afford a world-class concert feel (2 units flanking the DJ console firing up towards the ceiling, 2 units installed at ceiling level firing downward into the crowd, and 2 units installed onto the far-end of the club firing into the crowd); while 2 units each of smoke machine and haze machines add to the visual grandeur of the visual spectacle that patrons carry home as cherished memories. Additionally, the venue also has quick access to 4 units of cold pyro guns and a tri-nozzle confetti gun supplied by A2K Audo&Aux, which comes into full effect especially during celebratory events.

And rounding off the truly world-class clubbing experience that MAYA offers to its patrons is the impeccable audio system that’s responsible for the immersive sound experience that has won the hearts and ears of patrons and performing artists alike – with the venue having hosted dance music big-wigs like DJ Akhtar, DJ Akhil Talreja, DJ Vaggy and several more; each to sold out capacity events.

Considered as the true USP of the venue, the audio infrastructure at MAYA comprises a truly bespoke system. The main PA comprises a horn-loaded system of custom designed loudspeakers by A2K Audo&Aux that features dual LF drivers from B&C along with a co-axial 1.5inch MF and HF driver horn from BMS Germany. Custom designed subwoofers featuring dual 18inch drivers from Precision

Devices complement the horn-loaded loudspeakers to create a deftly impactful and true high-quality soundscape within the club; with the main PA system powered through multiple units of the legendary L2400 power amplifiers from Dynacord with a damping factor > 3000, thereby offering ample headroom and the capability to drive the system at higher volumes without compromising on clarity. Additionally, the VIP section of the club has been outfitted with 2 units of the high- performance CF-10 loudspeakers from CSC Audio, which is driven through a single unit of the ultra- efficient CSC Audio HPA 3602 amplifier. And completing the system – A2K Audio&Aux have chosen the outstandingly dynamic ethernet enabled MS26 96Khz DSP from CSC Audio to control and manage the entire loudspeaker system.

Speaking about the experience of working on the project, Akash summarised: “We were given a total of 8 days to work this project from inception to delivery; and the fact that we commissioned such a high-quality job including the acoustic treatment and the eventual integration and precise programming of all the equipment in an extremely tight time-frame of just 6 days is truly an achievement that we not only cherish but also celebrate. Our team of dedicated experts and professionals worked 13 hour shifts around the clock to make sure we delivered true on our promises well before the deadline.

Of course, we had a great deal of support from our partners at Saint Gobain and also the OEM manufacturers who not only ensured that the respective systems and solutions were custom designed, but also delivered precisely in time. Last but certainly not the least, a big thank you to Mr Ghattamaneni for his faith and confidence in our capability to deliver, and for supporting our team throughout the process. In fact, Mr Ghattamaneni and his team have been so impressed by our work, that he’s insisted that A2K Audo&Aux take up regular maintenance of his other properties in Goa, and also work on projects lined up for the future. There can’t be any bigger compliment than that for us!”