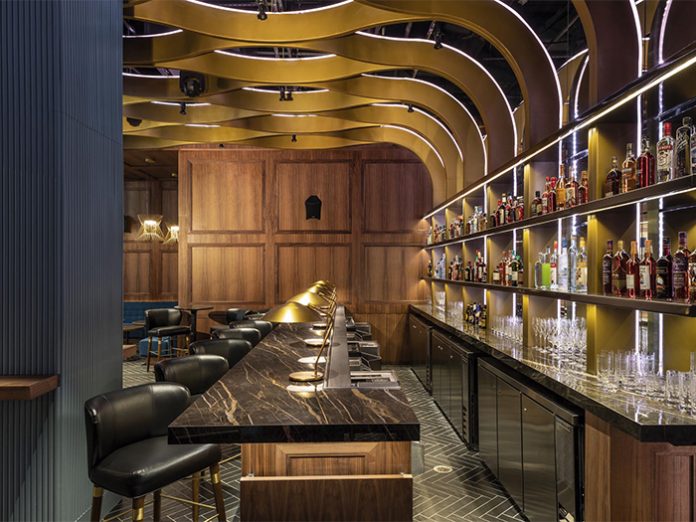 The up-and-coming neighbourhood of Brickell is not only recognised as the financial district of the city, but it is rapidly developing into a stylish and much sought-after residential area. Enter 8Street Brickell – a boutique bar owned and operated by Mark Meram with a capacity to host exclusive VIP parties and DJ sets, whilst also offering an intimate hangout for locals, as well as international and national tourists.

Mark’s vision was to create a sophisticated modern twist on a classic speakeasy style, with the interior of the venue creating a homage to the design ethos of the 1920s, including wood and button tuft upholstery and a soaring and undulating ceiling enhanced with LED lighting.

8Street Brickell was designed by Callin Fortis and his team at Bigtime Design Studios as part of a brand-new condo complex. “From the offset, we knew this venue was going to be something special,” explained Callin. “Equally it was going to demand a high-level audio installation which would complement, not detract, from the overall look and feel of the bar. In particular, because of the complex LED-mapped ceiling grid we were designing as a focal point of the bar’s architecture. It was a natural fit for us to work with high-end integrator Paul Van Puffelen and his team at Southern Technical Support Inc in order to help us realise Mark’s distinct vision of a modern-day speakeasy.”

Mark was clear on what he wanted for the audio specification. “We were looking for a versatile audio system which would be well received by guest DJs for special events, but would also provide reliable perimeter and distributed audio coverage for our daytime service, as well as our lounge night concept. We wanted loudspeakers that would accentuate the space and act as part of the design, becoming a piece of art. We had Void Acoustics in mind long before we appointed our consultants.”

System design integrator, Paul Van Puffelen from Southern Technical Support Inc, worked in close conjunction with audio partner, Mike Harris of Harris Audio Systems, to specify the Void Acoustics installation. Together, they answered the design brief for the high spec, sleek-looking audio system with a turnkey solution, including the installation and programming of a full Void system including the iconic Void Acoustics signature Air Motion loudspeakers accompanied by Air 8 and Airten V2 fixtures, and the IP-55 rated Cyclone 55 for the outside patio, completed by Stasys 218 subwoofers with Bias Q2 and Bias V9 amplifiers. All products were enhanced with a custom pantone matte black colour finish to reflect the designer’s project look.

Paul reflected: “The main challenge was specifying and installing a high- end audio installation into a brand-new venue during a pandemic! There were numerous delays during 2020 which, in the end, served us well, as it allowed the individual trades to come in and perfect each aspect of the installation without any real-time pressure, because all venues were closed at the time. Most importantly, it allowed us the time to implement a strategic acoustical treatment. We ended up with as much time as we felt we needed to tune the room and ensure there was no negative impact to the quality of the sound system resulting from any mechanical noises, air conditioning units and other structural elements of the build.”

Whilst the Brickell neighbourhood has a plethora of bars and restaurants, there is nothing like 8Street Brickell in the vicinity and the bar offers something truly unique. Mark is thrilled with the outcome: “My wish was to create an approachable, but entirely unique and memorable experience for anyone stepping foot inside 8Street Brickell. In fact, offering our customers a chance to step back in time and celebrate that moment in history where the speakeasy was THE place to secretly meet. The sound system was one of the most important aspects of the space.

A futuristic and quality Void Acoustics sound system helped create this intrigue and our guests’ first reaction when they walk in is instantly one of awe and curiosity in the sound system.”

Mark also credits the expertise, hard work and dedication of the Southern Technical Support Inc team as central to him achieving his vision. He saw them deliver his goals seamlessly, whilst also keeping the integrity of the bar’s design intact.

“We couldn’t be happier with the look and sound of the Void Acoustics system. I have always been an avid fan of Void Acoustics and knew that they were the only loudspeakers on the planet that would give us the sound quality and look we so desperately desired for the venue.”