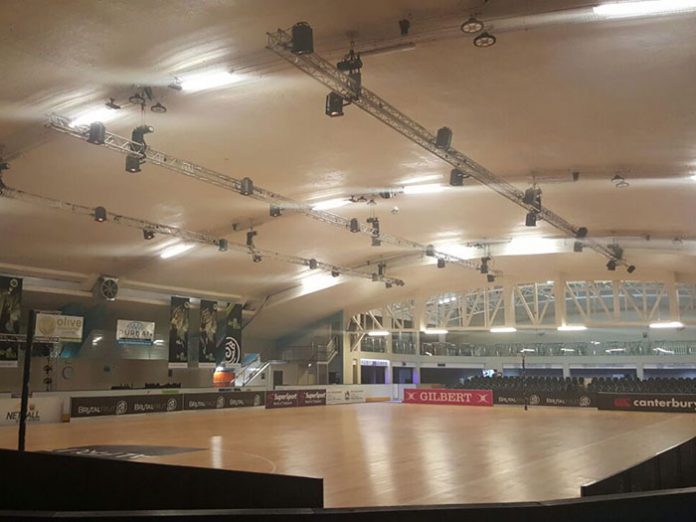 The Durban Ice Arena was closed for public skating from the 16th to 31st May 2016 because it had undergone a transformation to host the Brutal Fruit Netball Premier League. Black Coffee, commissioned by Shaun Brickell from Umlilo Brands, an event management, brand activation and technical company, provided the television lighting, a few Philips Selecon Arena and Rama Fresnels providing a lighting solution.

Brandon Bunyan, owner of Black Coffee, gave a rendition of the transformation: “This is a gig that has turned into an interesting science for us and unfortunately, a nightmare for our client. To start with, it is in an ice rink with a special sports wooden floor covering, there is a major moisture/condensation problem making the play field very slippery.

Brandon added: “There were so many theories and factors such as, the arched concrete roof with the Durban sun, too many doors open with the Durban humidity as well as the close-proximity of the ocean. Also, the floor having been in Pretoria for 3 months then sitting in a hot container for a week, which needed to acclimatise to the ice rink.”

Brandon also stated other science issues such as the air flow between the ice and the wooden floor and how it was too much or too little because the vertical temperature migration from the ice to the surface of the wooden floor caused a climatic meniscus on the stratosphere of the primary coating of the floor. As a result, a professor of physics was called upon for consultation.

Eventually, Brandon and his team began to look for an LED sports arena flood solution for this job that would not affect the temperature of the Play Field and would possess the right flicker rate for HD cameras.

This idea was put forward as it would theoretically save lots of power and illuminate both globe failure and maintenance over the next two weeks of constant use. However, time was a factor so Brandon decided to reinforce the 2kw Selecon Arena Fresnels stock to 30 fixtures. After focusing, a few added 1k Selecon Rama Fresnels to fix up dark spots was required and at 80% intensity, the camera operators were content.

Brandon spoke about what he would change next time: “If we have the same height restrictions of 6.8m from the lens, we will use 33 fixtures to cover the 30m / 15m court.”

Regulation roof height for Net Ball is 8.3m and Brandon stated the camera is sitting at 6.8m to the lens so he predicted the lens will catch spectacular ball strikes on the units, which will result in some adventurous high-speed technician globe change displays between matches.

Brandon conculded with the what could have been if he and his team found and purchased an LED product for this event: “The condensation problem would have crippled my client – we are leaving the lights on at 15% overnight which is, as we found out one morning, just enough to keep the floor evenly dry.”

Brandon found that setting the dimmers to 5% pre-heat kept the fixtures and globes warm for the next 2 weeks. Furthermore, Roy and Kerry Wood from Riggology designed, engineered and installed the 9 rigging points, permanently in the venue.