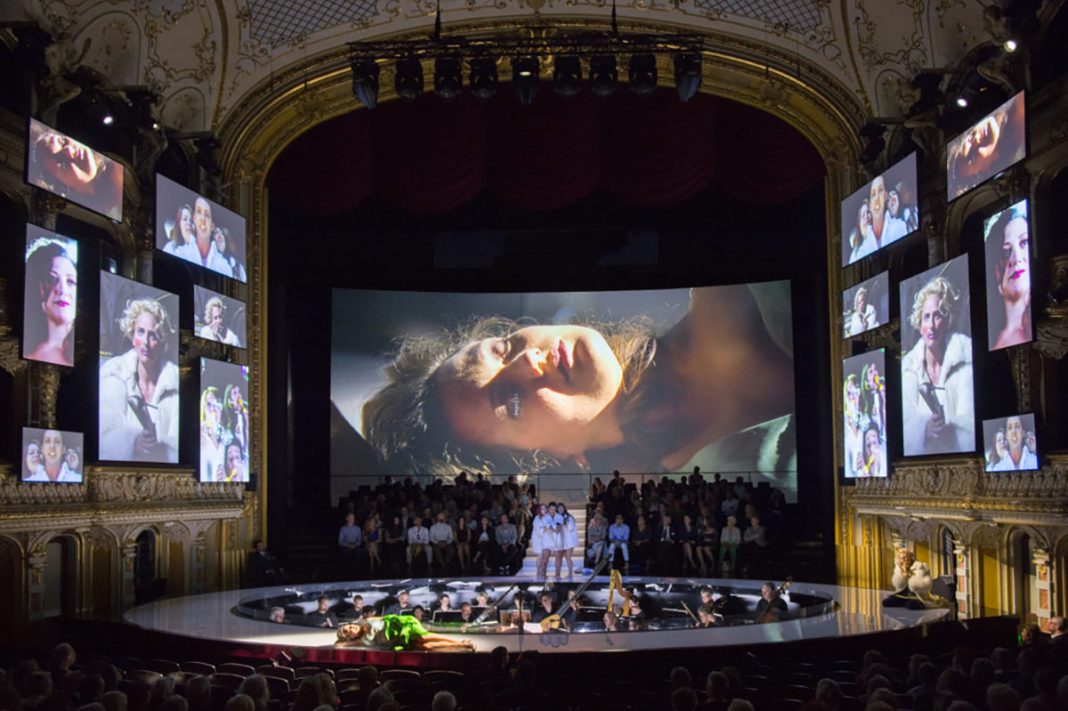 Zürich Opera House has been the home of the Zürich Opera since 1891 and during its time has never shied away from controversy. Over the years, many of its award-winning productions have attracted publicity for their subject matter and innovative use of technology. For the staging of Claudio Monteverdi’s opera “L’incoronazione di Poppea” the creative team wrestled with the challenge of how best to portray a thoroughly corrupt and vainly narcissistic society on stage. The solution drew attention to the ‘selfie’ culture by projecting oversized images of the actors onto 16 x 9 screens on the auditorium balconies, adding a unique close-up dynamic to the live performance.

For the technical implementation of this ambitious setup, the famous opera house put its trust in Christie technology. This project utilised an end-to-end Christie technology solution including 30,000 lumen projectors, Pandoras Box servers, and the Christie Terra AV over IP system, to switch, scale and extend signals of 4K video content. The finished solution was the first install of its kind in the EMEA region.

The Zurich Opera House changes its show configuration every day and has rehearsals for one show during the day, and then a different show in the evening. This meant that the content for each show had to be changed quickly and easily; the projectors moved around the house and 4K content switched and distributed to them with as little latency as possible. This was especially important when using cameras to film the actors on stage and display them live through a projected image. The mix of Christie Pandoras Box media servers and Christie Terra allowed the changing of content and resolution for each show, routing lossless 4K@60Hz content via existing fibre network to the projectors. The Terra solution took control of the projectors’ web GUI and the media servers, without having to run extra network cables. Terra also delivered a multiview function in the control room to facilitate a live preview of the media server’s outputs.

Christie Partner smARTec supplied nine Terra transmitters, seven Terra receivers, and two Terra controllers (one for redundancy) to manage the routing of content from transmitters to receivers. Terra transmitted the artifact-free data over 10G Ethernet, from the Christie Pandoras Box servers and the cameras to the Christie projectors, thus supplying the images for the video mappings and stage projections (as well as to the director’s preview monitors).

Elfried Roller, deputy head of lighting at the Zurich Opera House commented, “It would have been a huge effort to use monitors or LED walls for the 14 screens. We had the idea of projecting the images upright across the balconies, using Christie projectors in sound-insulated cases. A 1080p feed would have been too little for the individual screens, and so only a native 4K feed was an option. Christie Terra enables latency-free transmission of the native 4K signals (4:4:4 at 60 Hz) and guarantees multiple use of the input signals for confidence viewing. There is no need for a fibre optic crossbar or for replugging. The possibility of productions using multiviewers, projection previews and live cameras makes our work a lot easier,” said Roller.

The Christie Terra technology has been used in many other productions since the Calixto Bieto’s L’incoronazione di Poppea production. “We were very satisfied with the complete solution of Pandoras Box servers, and Terra AV over IP SDVoE technology solution, as well as the Boxer 4K projectors. Receiving everything from one source is very convenient for stage operations, or when we need efficient support for our system,” concluded Roller.