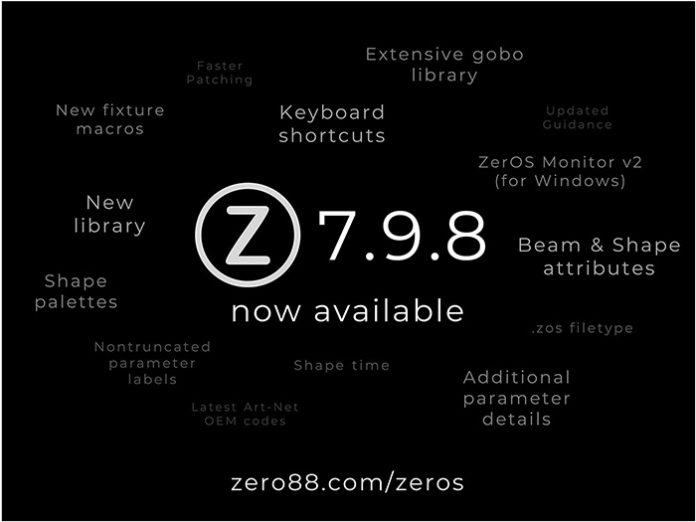 The headline feature, ZerOS Library, is a library which doubles the amount of fixture personalities available to Zero 88 users, and includes extensive gobo libraries, additional fixture macros and much more detail about each fixture’s parameters.

“ZerOS Library is a brain-transfer for ZerOS – not only providing great new features today, but setting up for the next decade of releases planned for Zero 88 customers, users and fans,” said Zero 88 Product Marketing Manager, Jon Hole.

To achieve this the ZerOS Library collates data from many different sources which are then referenced throughout ZerOS. Some of these sources include Carallon’s Fixture Database, ESTA’s Manufacturer ID Database, LEE Filter’s Mood Boards and Zero 88’s latest Effects and Waveforms.

The new software update also introduces a series of comprehensive keyboard shortcuts for all the front panel controls and many other software controls. “Our users are often utilising tools like ZerOS Server and ZerOS Monitor to control their lighting rigs remotely from their console, which ZerOS 7.9.8 makes even easier and quicker to access,” explained Edward Smith, Zero 88 Product Specialist. “We initially added these neat shortcuts to our offline editor, Phantom ZerOS, to assist in remotely training users during lockdown, but the update was so well received that we’ve rolled it out to everyone.”

There’s also a newly introduced Shape attribute which sits alongside Intensity, Colour, Beam and Position to provide additional creativity with palettes, greater control of cue fades, and quicker access to parameters. Other features include faster patching, updated Guidance and the latest Art-Net OEM codes to ensure full interoperability when mixing fixtures from different manufactures within a lighting rig and control network.

Zero 88 simultaneously releases ZerOS Monitor 2.0.0 for Windows, a free application allowing a Windows laptop or tablet to act as an interactive, remote monitor which compliments the iOS and Android apps already available.