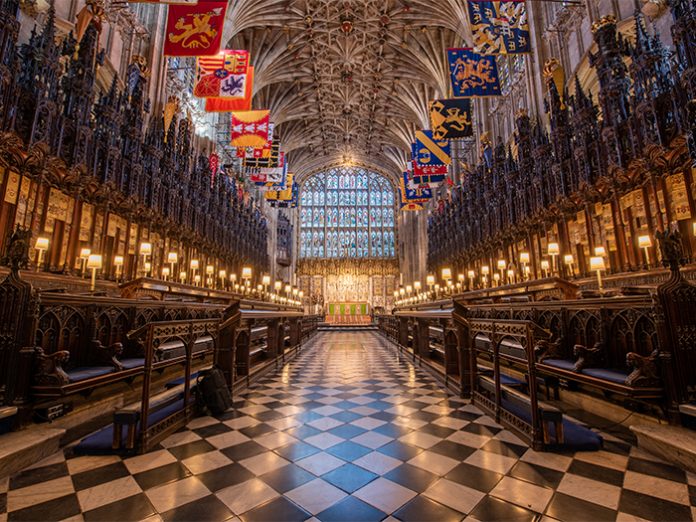 St George’s Chapel at Windsor ranks amongst the UK’s most treasured examples of British heritage. Originally built in the 15th century by King Edward IV, the chapel has been the scene of many royal services and weddings, including those of The Duke and Duchess of Sussex, and HRH Princess Eugenie and Mr Jack Brooksbank. From the 15th century to the current day the chapel has been a chosen burial place for the British royal family including King Edward IV, King Henry VIII, King George III and, most recently, for Queen Elizabeth the Queen Mother and Prince Philip, Duke of Edinburgh.

The chapel is regarded as one of the most beautiful ecclesiastical buildings in England and is characterised by large windows and tall, slender pillars giving the impression of grace and elegance. The quire features outstanding examples of medieval woodwork and ironwork, with the swords, helmets and banners of the Knights of the Garter forming a notable assemblage of English heraldry.

Whitwam AV Integration has installed a totally modern and sympathetically styled audio-visual system that has transformed the way that words and music are experienced throughout the building, blending imperceptibly with the magnificent and historically rich setting.

The loudspeaker system from Italian manufacturer K-array focuses on providing superior vocal intelligibility in what is a generally challenging acoustic environment with a typical RT60 of three or four seconds, so the audio design emphasised the placement of sources relatively close to the listener to increase direct sound and reduce reflections. Vyper half-metre long line arrays form the nucleus of the widely distributed loudspeaker system for the nave, with low frequency reinforcement from Rumble-KU44 subwoofers hidden behind grilles in the floor where the old heating pipes had once been.

Each of the pillars lining the nave carries Viper-KV52 line arrays; single enclosures on the outsides facing into the side aisles, and double-stacked enclosures directed at the seating areas to give additional throw towards the middle of the building. Increasing the speaker count not only reduces the average audio paths to the congregation, but also fills in the previous gaps between the pillars and heightens intelligibility.

Floor-mounted Kobra-KK52 line arrays are placed for additional sound reinforcement in the Bray and Rutland chantry chapels, and at left and right of the high altar at the east end of the quire.

All the K-array speakers were colour-matched to a RAL swatch chosen by the Surveyor of the Fabric, who picked the colour he thought best suited the stonework and the average hue of the building. They are mounted on custom brackets fabricated with keyhole mounting slots to fit neatly within the cleft of the pillar so that cables could run up invisibly behind them, and allow the loudspeakers to be quickly and easily removed for servicing or replacement.

To accommodate the acoustic delay down the building the K-array speakers are paired up on amplifier channels and fed with delayed audio, while channel interleaving redundancy built into the speaker assignment avoids widespread loss of audio in the event of an amplifier failure.

Opportunities for speaker locations in the quire were obviously limited to near-field options. “For the majority of seating locations the JBL Control 52s worked well but didn’t quite fit visually in all areas, so we put in additional K-array Lyzard-KZ1s on the choir stall upstands and, thanks to their very compact dimensions they simply disappear amongst the woodwork,” explained Pymm. Between them the Control 52 and the KZ1 sub-miniature speakers (around 80 in all) provide exceptionally uniform coverage, while floor mounted K-array Rumble-KU44 subwoofers enhance the low-end response.

The K-array speakers are to all intents and purposes invisible, and offer excellent, highly intelligible, very near-field coverage without needing a lot of energy which would otherwise unnecessarily excite the building.

The heart of the signal processing system is a Dante enabled QSC Q-SYS Core510i control processor with analogue audio input and output cards, providing microphone switching and volume level adjustment all managed by the Crestron system. The building is split up into 24 zones arranged in several bays down the nave, plus three in the quire as well as the high altar and the side aisles and all of these are individually controlled. Audio distribution from processors to the Yamaha amplifiers driving the speaker systems is accomplished via Dante while there is also CAT5 infrastructure installed around the building.

“Crestron touchscreens provide the intuitive user interface that enables the staff – who are non-technical – to switch on the audio system with one touch and assign sources to various zones using a graphical representation of the building,” said Pymm. “They can adjust volume levels, adjust the mix among a number of live microphones and also control some of the video routing via the touchscreens distributed throughout the building.”

The three central equipment racks located in the south quire aisle house a comprehensive array of hardware that allows operation and monitoring of the whole audio/video system from a central point, including the Yamaha power amplifiers, Crestron touch screen and Marshall video monitors, Fostex RM3 monitor speaker, and Tascam SS-CDR250N multi-format audio recorder that also allows music tracks to be cued up and played remotely.

The organ loft has its own dedicated sound and vision facility with a Crestron touch screen, JVC zero latency video monitor and pair of KEF monitor speakers, so allowing the organist to see and hear everything and with the ability to adjust audio levels if need be. A pair of Panasonic AW-UE70 4K PTZ high-definition cameras with pre-set view positions are installed in the organ loft, one facing west towards the nave and the other covering the quire, which enable the organist to watch for processions entering the North door, and to see the conductor’s cues.

“In the past the organist had to do this by line-of-sight with mirrors, but today the very low latency of the cameras ensures that he can easily synchronise with the conductor’s down beat at all times. He has pair of KEF speakers and headphones to give him a direct way of hearing the choir rather than acoustically with the inevitable building delay. And there is a miniature Shure SM11 microphone placed halfway down the quire so that he can hear the conductor’s instructions to the choristers and lay clerks,” said Pymm.

Providing voice capture duties are microphones from Audio Technica; mostly ES935ML6 microline capsules on custom mounts designed with a push-to-talk switch and a status LED for self-operation, in various locations around the building and within the woodwork and fabric of the quire. Sennheiser 2000 series radio mics allow for hand-held or stand mounted use anywhere in the building, while for music duties Sennheiser MKH8040 condenser microphones are partially hidden behind the speakers in the nave for picking up the choir so that the organist can hear them clearly.

These mics also feed the induction loops in the nave and quire so that the hard of hearing can hear the speech and choir as well as the ambience of the building. Microphones can be plugged in to floor boxes and connection panels in many different locations around the building, using seven-pin XLR connections to provide audio and switching, and these all tally up with the inputs on the Q-SYS DSP.

“The key to success at St George’s Chapel has been the way that the equipment all fits together so seamlessly to overcome the acoustic and visual challenges they had in the past, and the simplicity with which it can be operated given the vast range of different events that routinely happen in the chapel,” concluded Pymm. “The staff don’t have to worry or even think about the technology, it all just works quietly and neatly in the background.”