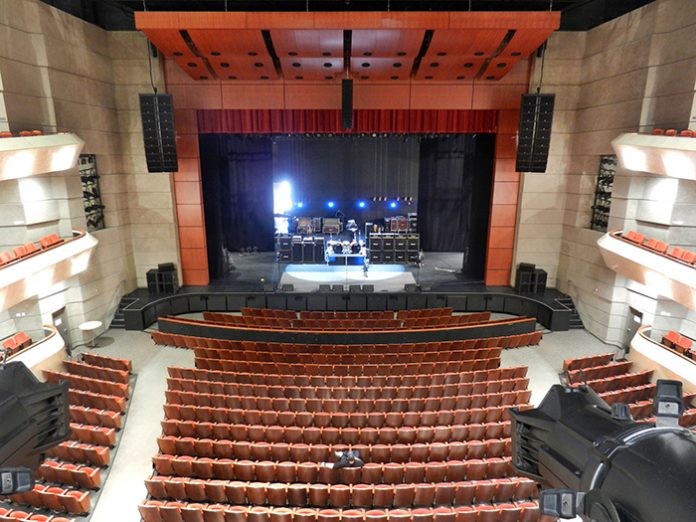 First opening its doors in November of 2011 with a gala concert featuring Rod Stewart, Wagner Noël Performing Arts Center (WNPAC) is an $81-million, state-of-the-art music and theatre complex at the University of Texas of the Permian Basin. Home to a 1,800-seat performance hall, intimate 200-seat recital hall and the University’s music department, the facility is a visually striking beacon for the arts for the communities of Midland, Odessa and beyond.

However, the main hall’s original PA system – modern as it was – was never able to match the venue’s acoustical needs: the sweeping balconies that ring the interior right up to the stage previously made proper sound coverage virtually impossible using conventional sound reinforcement technology. That’s why WNPAC recently turned to audiovisual systems integrator LD Systems, which designed and installed a new L-Acoustics K2 audio solution.

The new system is comprised of 20 K2 boxes arranged in a left-right hang configuration, with eight K1-SB and four KS28 subwoofers providing generous low-frequency response. The Kiva II makes its first stateside appearance in a PAS in this install – 14 are flown in a centre array for vocal reinforcement. Seven 5XT enclosures are used for front-fills, with two ARCS Focus boxes serving as in-fills. Eleven LA12X and four LA4X AVB-enabled amplified controllers power and process the entire system.

“The big challenge here was sight lines that are fairly extreme; you have people who sit all the way along the edge in the balcony, close to the proscenium wall, so that means the main hangs have to be placed very close to proscenium walls,” explained LD Systems Sales Engineer Kevin Broussard. “The big benefit of the K2 system is its asymmetrical-pattern capability. We used the K2 in asymmetric mode and were able to keep most of the energy off of the walls and off of the stage, where it could create feedback problems. We’re able to achieve very precise aiming. Nothing else could have addressed the balcony situation as comprehensively and elegantly as the K2.”

LD Systems technicians utilised L-Acoustics’ Soundvision software, which provides extremely accurate 3D acoustical simulation and real-time mapping of coverage and delay modes. In addition, since LD Systems is also a rental company and an L-Acoustics partner, it was able to deploy a K2 system from its rental inventory at WNPAC for a one-off event ahead of the installation as a proof-of-concept demonstration.

“We were able to fly the exact same elements in the exact same positions and showed the client that the K2 would overcome the room’s acoustical challenges,” Kevin recalled. “That demonstration just blew them all away.” So did the first performance of the system in place, which was Mötley Crüe lead vocalist Vince Neil backed by Great White.

LD Systems also amazed the client by installing the new system in an astounding five days, with the countdown starting 5th January, by pre-programming amplifiers and DSP at its Houston office and minimising cable via networking. “The installation and integration process never interfered with their production schedule,” Broussard says, with justifiable pride.

WNPAC Senior Production and Operations Manager Dave Davis describes the difference in sound as night and day. “Before, it was a constant battle with the old sound system – we were just never able to get the sound to cover the loge areas fully,” he said. “The ability to provide proper coverage of the theatre and give each and every one of our patrons an enjoyable listening experience was one of our prime considerations in selecting L-Acoustics. Versatility was also important. Our venue can now handle just about any touring production’s audio needs. Anything from solo acts, jazz, country, rock, metal and Broadway – it all sounds awesome on the new system. Sonically, the L-Acoustics system faithfully reproduces every nuance of a performance at any volume level. Simply put, these sound amazing in our venue. Now, when visiting audio engineers come in, you can see the smiles on their faces when they push up the faders and walk the room.”

The new K2 system has done more than make WNPAC sound better, though – it’s also helping the venue’s bottom line by making it a more attractive stop for top touring acts. For instance, Dave recalled that before the L-Acoustics K2 arrays went in, many major touring acts would opt to unload and use their own sound systems. “Now, when we advance their shows and they discover that we have the K2s installed, they gladly use the house system. It’s less gear that they have to pull off their truck, so it saves them time and money at load-in and load-out, and it’s made our facility a much more pleasant place to perform,” says Dave. “It’s been a real transformation – a good one.”