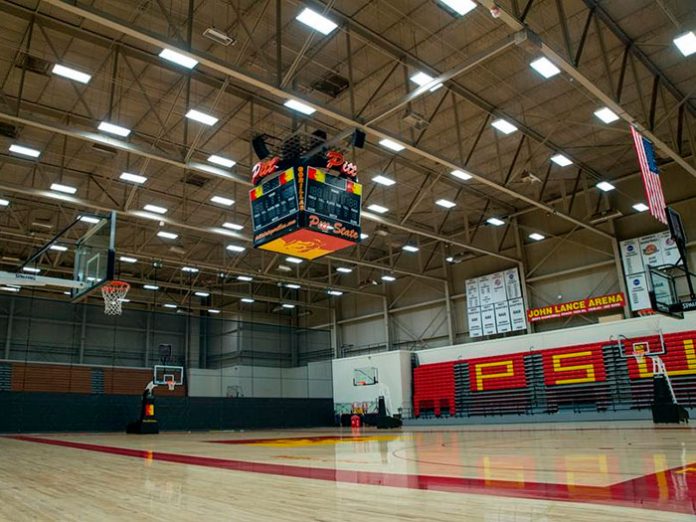 The new VUE sound system in the Lance Arena consists of four arrays and two zones of fill speakers. The two arrays that face the North and South sides of the arena each are made up of four VUE al-4 Subcompact Line Array systems and one al-4SB Flying Subwoofer System. Each of the two arrays facing the East and West ends of the arena are comprised of six al-4s and one al-4SB. Eight VUE i-8 Compact Full Range Foreground Systems set-up in two zones serve as the fill speakers.

“The University as a whole has become very aggressive in updating and maintaining spotlight features around its campus,” said Zach Aaron, CEO of Reliant Media. “The school’s athletic department was undertaking new construction elsewhere on campus, so they felt it was time to rethink all of their indoor athletic facility audio systems. That prompted the basketball arena upgrade. PSU’s athletic department was very interested in VUE after listening to it. We were able to explain to them the difference between a line array and a typical distributed system, and the pros and cons. They were very much onboard with the line array approach, and VUE offers products that allowed us to take advantage of the size and weight constraints while providing superior fidelity.”

One of the main hangs made up of six al-4 line array elements hangs above the scoreboard. “We demonstrated essentially what would have been one-fourth of the complete system,” said Jeff Taylor, VP Americas, VUE Audiotechnik. “The VUE system was set on the floor and we explained how this would basically be one side of the four-sided scoreboard system. We listened on the VUE system, then on their existing scoreboard system. The entire existing system wasn’t as impressive as the one stack of VUE speakers on the floor.

“The challenge was creating a system to serve a long multipurpose room,” continued Jeff. “A situation like a graduation — where you have a thousand or more folding seats on the floor, plus people in the bleachers — requires very different sound reinforcement from that of a basketball or a volleyball game. Instead of creating a complex dual-system solution where there are really two separate systems and you use one or the other based upon the event, the performance of this VUE rig allows the flexibility to position the basketball arena-style system for coverage of the floor seating as well. The i-8s cover the basketball court itself. So depending on whether they are in the arena configuration or the commencement configuration, the speakers are realigned (time-aligned) to provide voice reinforcement to the floor seating, and the arrays turn to the bleachers as they always did. Configuring the system in this manner saves the University money because now there’s no need for them to rent a PA system for their commencements.”

“The design that we replaced was an old distributed system that was suspended up above the scoreboard using a very antiquated steel sub-structure; we didn’t have a whole lot of options as far as rigging was concerned,” said Zach. “We also were given pretty narrow weight constraints. Given all those factors, we still had to meet the client’s expectations for fidelity. We used the al-4 system to build North, South, East, and West line arrays up above the scoreboard, then used four i-8s for the scoreboard fill, and another four i-8’s for the mezzanine delay speakers.”