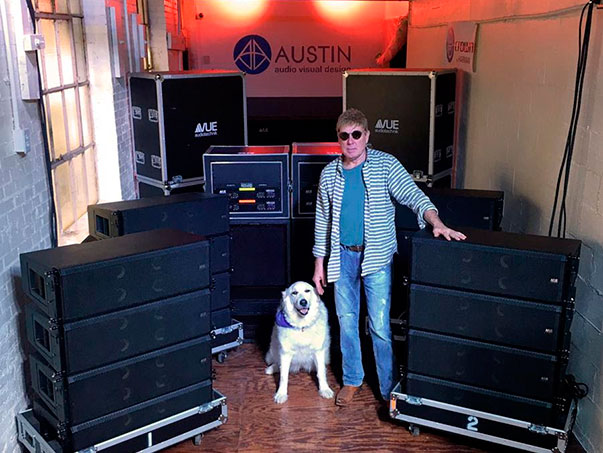 “The most frequent comment my engineers and I receive on the VUE system points to the clarity and truthfulness of the sound reproduction,” said Philip Austin, president of Austin Audio Visual Design. “We’ve used other line-array cabinets before and the VUE system is the first one that is completely smooth throughout the audible range; it’s the first thing people notice when we demo it for them. Our first gig with the new system was during a three-day bluegrass festival called Uncle Dave Macon Days, and they were blown away with the sound quality of the acoustic instruments.”

Philip said it was the vocals that “really stood out for him that particular festival. However, I can’t just really point out one thing because everything in the mix seemed to blend well. The distance from the stage to the road was about 300 feet, and you could walk all the way to the road and not lose the sound of the musical acts. Uncle Dave Macon Days has been touring for about 20 years and we were told by the people working the tour that this was the best it has ever sounded.”

Both VUE’s al-Class and h-Class loudspeakers feature compression drivers with Truextent beryllium diaphragms. By moving the first break-up modes well above the audible range, this allows for a noticeable difference in the HF extension and response linearity. Beryllium outperforms many commonly used diaphragm materials, due to its significantly higher stiffness-to-mass ratio.

“The first time that our technicians and I heard the system, we were extremely impressed,” said Austin. “We were at a VUE demo in Florida and everyone that listened had nothing but positive things to say about the speakers. Our main goal in attending was to purchase a line-array system that was able to achieve solid, quality sound. The other attributes of the system, including its range and lightweight aspects of the power amps, were all added bonuses.”

Austin and his staff plan to use the VUE system for several up-coming events, from the renowned Smoke in the Valley festival, to a combined Fourth of July fireworks show and local symphony performance. The fast setup of the al-8 Line Array system makes it a popular choice for events like these.

“An engineer that we worked with during Uncle Dave Macon Days said it was the first time he was able to set up a system, turn it on and not want to change anything at all,” said Philip. “The engineer noted that normally there is a whole bunch of EQing that is involved in trying to get the PA to sound right; however, the al-8s sounded perfect right out of the box.”

“We are extremely ecstatic to have someone with the experience of Philip Austin join the VUE family,” said Ken Berger, CEO of VUE Audiotechnik. “Audio Visual Design is well established, with over 30 years of experience in the audio field, and I know they will do a great job representing us in Nashville, a place with such a rich music tradition.”