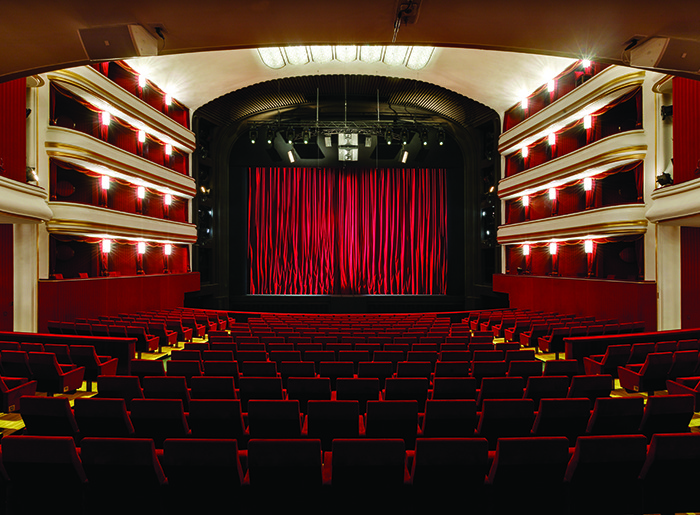 The Vienna Volksoper, also known as the People’s Opera, is Europe’s leading operetta house and Vienna’s largest theatre for opera, musicals, classical concerts and ballet. The Volksoper offers one of the most diverse musical programmes in the country, ranging from Carmen to Kiss Me Kate, and Coppelia to Cabaret, as well as productions for schools, many local German operetta performances and much more.

The venue was also the first in Vienna to open its doors to the public after the summer break, but, more importantly, in the wake of the COVID-19 crisis, with a performance of Strauss’s Die Fledermaus on 1 September, followed by a revival of Cole Porter’s classic musical, Kiss Me Kate on 2 September. Both productions benefitted from the pristine audio reproduction of a new, specifically-designed KV2 audio system, which also happens to be the first ever to use KV2’s new Control & Diagnostics Tool for remote system management and control.

The new sound system for the 1,339-capacity venue was designed by Martin Lukesch, Director of Sound and Media Technology at Vienna Volksoper. “Here, it’s all about the music!” he explained. “As a repertory theatre with a hugely varied performance range – we can be staging a rock musical one night and a classical ballet the next – the demands on the sound system are enormous. “Our season starts on 1 September and we have rehearsals every morning and performances every evening, non-stop, until 30 June. This was my starting point when it came to designing a new system. It had to be able to fulfil the needs of all the different types of shows we stage, and deliver the best possible audio experience for our audiences.

“The old system was mainly designed at the end of the 1990s. A huge system with point source loudspeakers and 58 remote-controlled Crown Macrotech amplifiers. This system was well designed and worked pretty well for more than 20 years, but it was coming to the end of its life expectancy.”

There was a lot to consider ahead of the installation project – particularly as Vienna Volksoper is such a historic venue. Martin explained further: “First of all, we did market analysis, which led to us conducting a survey of the structure to find out what was possible in terms of mechanical loads, as well as to specify the features of the loudspeakers and amplifiers, such as point source, -3dB cut-off frequency below 40Hz, wide dispersion, amplifiers with network control and diagnostics, and more.”

Martin had been a fan of point source technology even before coming across KV2, convinced that it was the solution for Volksoper, but he took a while to find what he was looking for. However, once he’d found KV2 – he particularly recalled the first time that he heard the VHD system demoed at an outdoor stage at the Frankfurt Musik Messe – there was no going back.

For the main system, Martin selected three active driven, full-range ESR215S per side for the stalls, circle and upper circle. “I wanted a real full-range system with the -3dB point below 40 Hz,” he added. “The ESR215 is ideal with its wide 110º horizontal dispersion and smooth frequency response across the range. We chose the S slimline version to minimise visual impact. The centre cluster comprises two SL412 active driven wide dispersion loudspeakers flanked by an ESD10 and an ESD12 per side. Frequency and phase response are matched to the side system.

“There is also a second proscenium system of 12 smaller, wide dispersion boxes (ESD10s), mainly for sound effects. We have another effects system, known as ‘The voice of God’ located in the dome of the auditorium, which consists of two of the big ESR212s, plus a full surround system throughout the theatre – there are at least 60 loudspeakers, mainly ESD5s which are used for ‘room simulation’ to create ambience, or for special sound effects that require high diffusion. Finally, we have six more big point sources – ESR212s again – for the stage; if you need thunder or explosions on or behind the stage, then you need powerful loudspeakers on or behind the stage. The ESR212s are perfect, just as they are for the voice of God. There are also delays, frontfills, outfills and other loudspeakers for effects or monitoring throughout the auditorium.

Read the full story in our latest issue below –