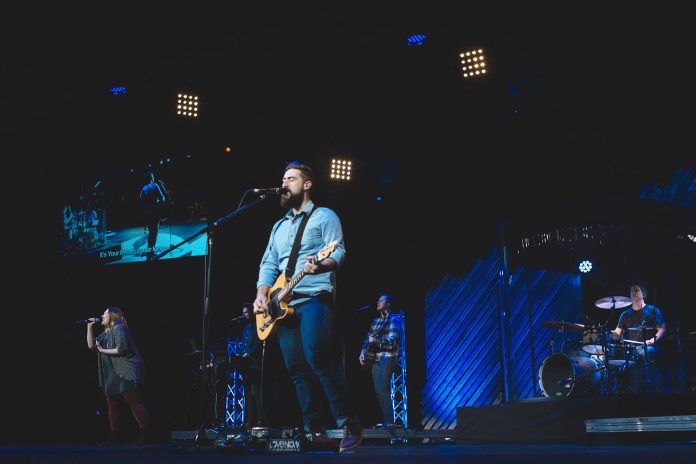 For nearly fifty years, Crossroads Church in Vancouver, Washington has held an influential role in the community. Not to be confused with the Canadian city of the same name, Vancouver, Washington is just across the Columbia River from Portland, Oregon. Five years ago, founding pastor Bill Ritchie welcomed the church’s new lead pastor, Daniel Fusco, a dreadlocked, bass-playing North-Easterner deep in spirit and short on convention. Since then, the Crossroads Church family has grown dramatically and to keep pace with expectations it recently installed a new Danley Sound Labs sound reinforcement system for its 2,200-seat auditorium.

A/V integration firm, Focus Partners LLC, of Redmond, Washington, worked with Crossroads over the past two years to upgrade their video, recording and broadcast infrastructure to bring it up to full HD spec. “The next project that needed serious attention was the sound reinforcement system for their main auditorium, of which was not only hard to listen to but also fatiguing to set up,” explained Dave Dartnall, owner/partner of Focus Partners. “We had already updated their 350-seat chapel with a pair of Danley SM-96 loudspeakers and they were totally shocked at how good they sounded. These are very technically sophisticated folks as there is recording artists in the congregation, as well as the church itself hiring high-end recording and live engineers. Pastor Daniel Fusco is a first-rate musician and has a very discriminating ear.

The FOH engineer Remington Smith has mixed bands and theatrical productions on every sized system in every type of venue so there’s really no gear he hasn’t heard! Why, there’s even a world-class recording studio on campus! These people know their stuff!” At around the same time that Dave and his team were beginning to think about what a new system might look like, coincidentally, a traveling big-name line array ‘road show’ was set up in Crossroads’ auditorium. The church was impressed by the line array and received a quote immediately.

After considering the cost of a premium concert-level line array system for the auditorium, as well as a new lighting and an LED wall display systems, budgeting and total weight capacity was being discussed. “Dave commented, ‘Look, I have a much better solution for our needs made possible by Danley Sound Labs that would also be much more responsible in terms of stewardship.’” “The line array was literally three times the cost of an abundantly powerful Danley system,” he said. They asked if it would be as good as the small chapel system, and I responded, ‘Even better!’ They needed proof, so we arranged a demo with the fabulous help of Joel Moak, Danley’s western Regional Sales Manager.”

The demo was a huge success. “Afterward, they said that the Danley system sounded so good that they would have gone with it even if it was more expensive than the line array,” Dave said. “The fact that it was a third of the cost was just a huge bonus!” The Danley system consists of two Danley SH-96HOs tight-packed and flown above the centre stage for a true centre channel that covers the entire room. An additional Danley SH-96HO flanks the central cluster on either side to provide true left-right stereo imaging whilst 80% of the congregation gets stereo coverage, working cooperatively with Three Danley TH-118 subwoofers that provide low-end support. Fed from Crossroads’ Dante network, three 4-channel Danley DNA 20k4 Pro Dante amplifiers power the system, replete with onboard DSP used for loudspeaker conditioning. Interestingly, those seven Danley boxes replaced forty boxes in the old system!

“I’ve worked with just about everything,” said FOH Engineer Remington Smith. “I’ve never experienced anything that comes close to Danley. Danley is so accurate, there are no colourations or inconsistencies. The phase response is perfect because everything is time-aligned when it comes out of the box. I never have to fight the Danley boxes to get the sound I need. The intelligibility is crystal clear, which is critical because my overarching goal is to make sure the word of God is heard.” Indeed, the coverage is so even that Dave cannot find more than a 1.5dB difference anywhere in the seating area! “Everyone at Crossroads Church loves the new system,” Dave lauded. “Some of the on-staff engineers compared it to listening to their studio monitors, and people are starting to visit from throughout the region just to hear it! I have demos lined up like crazy!”

Crossroads Church recently adopted a sister church across the river in Portland. With just three weeks’ warning they asked Focus Partners to come up with and install a new sound reinforcement system for the satellite church on an incredibly tight budget. “Although they weren’t designed by Danley for this purpose, and we wouldn’t give it a full endorsement, the church technical staff heard Danley’s budget GO-2-CX loudspeakers at the WFX Show,” Dave outlined. “Given the very limited money we had for the project, they felt the GO-2s would be the best compromise given the budget. Although not the same as Danley’s Synergy Horn boxes, the GO-2s sound noticeably better than conventional loudspeakers. We’re going to use four Danley GO-2-CXs, very much like at the main auditorium, two for center channel and one on either side for stereo.”

With the big new Danley system at the main campus and the smaller Danley GO-2 system at the satellite campus, Crossroads Church is ready to write the next chapter in storied history. Its new, immersive and inviting sound will certainly inspire even greater involvement of current members and members yet to be!