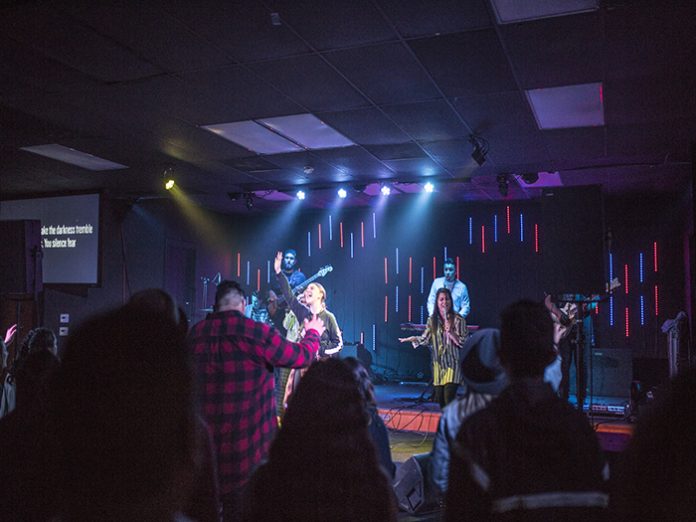 Founded in the San Diego area in 1926, Latin American Bible Institute is one of the oldest Hispanic educational institutions in the United States. Known as LABI College, the Biblically-based Pentecostal school settled in its current Los Angeles Metro location in 1950.

“We had worship services Friday night, Saturday morning, and Saturday evening in a rectangular room that’s about 100 feet back by 47 feet wide and can seat about 200 people,” Brian recalled.

“The room is pretty straightforward acoustically; the main issue is the long throw to the back. We put thick curtains on the back wall to damp it down a bit, so we didn’t have issues with reflections.”

Celestino’s main gig is mixing front-of-house and monitors at a large church in the Los Angeles Metro Area, and he does some mixing for independent events. This was his second year mixing at LABI College’s College Days.

“Last year, I had planned to use the TW Audio system because it came highly recommended, but it wasn’t available to us. The system we ended up using at LABI last year gave us good coverage but fell short with respect to power; I didn’t have enough headroom. I got a chance to see the TW AUDiO system at a Saddleback College event last summer, and I was excited about using it for the first time at College Days this year.”

“We stacked two B30 subs on each side, placed horizontally, and pole-mounted the T24Ns on top of the subs,” reported Brian.

“The subs were fed from aux sends on the Allen & Heath Qu-24 front-of-house console, so I was able to control the levels. The system’s coverage was great, and we had all the headroom I wanted in the same building where we’d struggled with power issues the previous year.”

Celestino was delighted with the system’s response. “It had a lot of dimension in that room that we didn’t feel before,” he specified.

“The crossovers were smooth; everything felt smooth, all the way from the highest frequencies down to the lows. Everything was clear, crisp, and punchy. When I used EQ, I got a natural response: If I cut 3 dB off something, it naturally felt like 3 dB, and I didn’t have to do major cuts on specific things just to try to get a representation of what I was hearing.”

The sound system’s efficiency proved a pleasant surprise. “We were running the system around 102 to 103 dB SPL peak, and we engaged the amps’ external breaker protection to ensure they wouldn’t trip the breakers, but we were barely pulling any power from the wall,” Brian praised. The system was very efficient.”

Although LABI College’s College Days gave Brian his first chance to use TW AUDiO loudspeakers, it surely won’t be his last. “This was an easy system to hook up and use,” he recounted.

“It sounded great, it was efficient, and it was responsive. And I loved the headroom; I never had to fight to get enough SPL.”