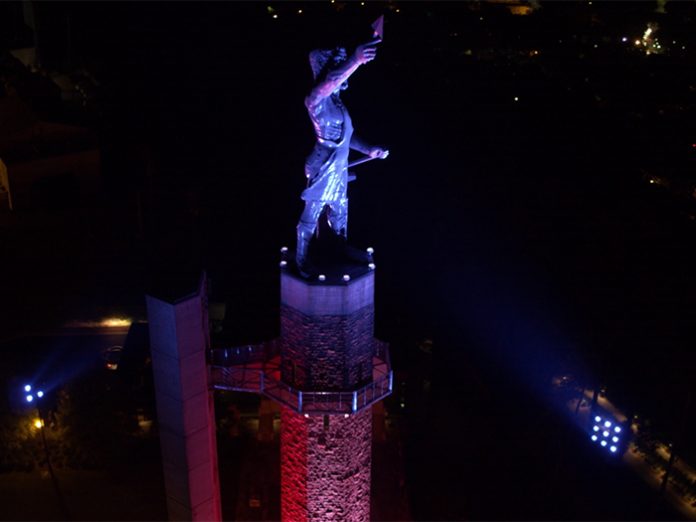 The largest cast iron statue in the world shines brightly over Birmingham, Alabama, thanks to lighting design by Schuler Shook and lighting design revisions, control system design, and programming by Marc Brickman and Tactical Manoeuvre. It’s been said that the essence of every picture is the frame. Likewise, the essence of the 56-foot Vulcan statue overlooking the city is the 124-foot pedestal on which it stands, highlighted and enhanced with seven Solaris Flare IP HR dual-head outdoor fixtures.

Lighting for the project was provided by 4Wall Nashville. “The Flare IPs have an incredible amount of firepower and are killer bright,” said 4Wall Account Executive, Damon Herbert. “We used the dual-head version of the Flare IP outdoor lights, with narrow 8-degree lenses for maximum throw.”

Damon added: “At night, the statue can be seen for miles and Tactical Manoeuvre’s programming is exquisite. Over two years in development, the clients are extremely happy with the results. Flares make us look good.” Find out more about 4Wall Entertainment at www.4wall.com.

Schuler Shook worked with the Kiwanis Club of Birmingham to develop concepts for re-energizing Vulcan’s presence over Birmingham through a dynamic use of light. The statue’s inclusion on the National Register of Historic Places led the team to design fixture mounting locations concealed around the base of the pedestal and on tall poles strategically placed around the park.

Tactical Manoeuvre (TactMan) was brought on to the Vulcan project toward the end of the design and construction process. After viewing the proposals for programming services from several other companies, Wayne Gillis of the Birmingham Kiwanis Club saw a video of a light-to-music show at the Empire State Building. He knew that was the kind of show needed for Vulcan and the people of Birmingham.

Elisha Griego of TactMan explained:, “Upon receiving Wayne’s call, Marc Brickman and the team got to work. We made some adjustments to the original lighting design to leverage newly available options, including the addition of seven dual-head Flare IP fixtures to supplement the previously specified fixtures. With a 124-foot tall base and a 56-foot statue on top of that, we needed serious firepower to get enough light from ground-mounted fixtures to give Vulcan a major presence on the Birmingham skyline, and the Flares were the perfect fit. The Flares also had the correct lensing for the job, and TMB worked with us and the general contractor to create custom glare shields.”

Elisha added “TactMan also introduced an innovative, first-of-its-kind proprietary scheduler. Operated from an off-the-shelf iPad, the scheduler allows Vulcan Park staff to schedule lighting events without knowing a thing about lighting programming. These control systems serve as the basis for TactMan’s proprietary audio sync app, soon allowing viewers to hear the audio for a light show latency-free, anywhere they have a line of site to the Vulcan statue.”